Driver plowed into protesters in Denver

Denver police take into custody a man they say drove into a crowd of protesters who were demonstrating against the Breonna Taylor decision Wednesday night.

DENVER - A driver was detained in Denver on Wednesday night after allegedly plowing his vehicle through a crowd of Breonna Taylor protesters, according to reports.

Videos posted on social media showed protesters surrounding the unidentified driver's vehicle, some pressing on the hood to block its path when the car accelerated through the crowd and knocked at least one person to the side of the road.

Denver police reported no injuries stemming from the incident. Others avoided the vehicle's path and some were seen chasing after the vehicle.

“I was kind of going up on the hood and I was like, ‘No, I’m not doing this,’ and I rolled over to the side,” a woman who identified herself as Kate told the Denver Post. “He wasn’t gonna stop even though I was, like, on his hood.” 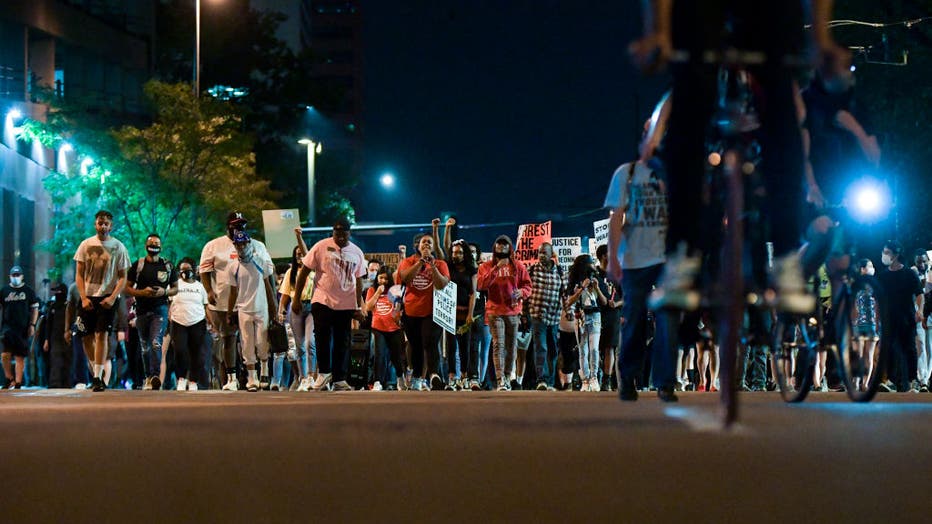 People march through downtown Denver as they protest the grand jury decision in the Breonna Taylor case on September 23, 2020. (Photo by Michael Ciaglo/Getty Images)

The incident, which occurred around 9:15 p.m., came toward the end of a night of protests in the city and occurred after most of the demonstrators left the area.

The protests in Denver, like many throughout the U.S., were fueled by a Kentucky grand jury’s decision to indict one of three police officers involved in the shooting death of Taylor -- 26-year-old Black emergency medical worker -- with criminal charges, according to authorities.

Louisville Metro police Officer Brett Hankison was charged with three counts of wanton endangerment in the first degree for his role in a drug operation that resulted in Taylor's March death. While he was indicted, it was not on charges directly linked to her death.

RELATED: Wanton endangerment: What do charges against officer in Breonna Taylor case mean?

Kate said she joined the Denver protest because “they let Breonna Taylor’s murderers off," according to the paper.

Wednesday's incident began when the driver pulled up near a small crowd rallying in front of the Colorado Statehouse. Some members of the group would surround the vehicle and shout at the driver to turn around, but he refused, the Denver Post reported. Protesters banged on the vehicle with their fists before the driver plowed through them.