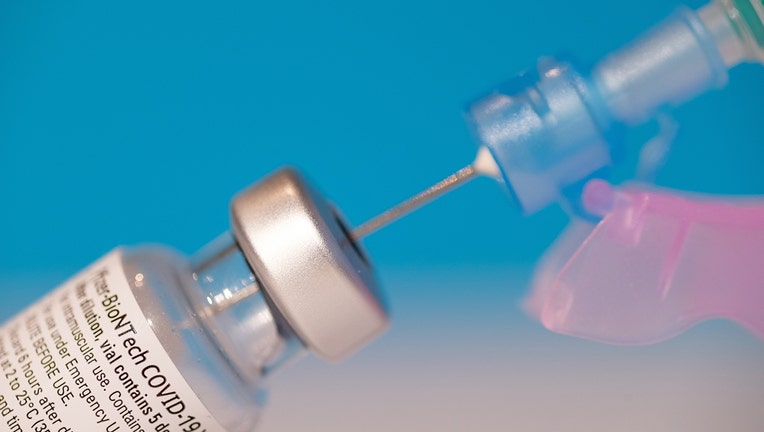 In this photo illustration a close up of a vial of Pfizer - BioNTech COVID-19 vaccine for coronavirus treatment with a syringe.(Credit: Marcos del Mazo/LightRocket via Getty Images)

MILAN - A dentist in Italy faces possible criminal charges after trying to receive a coronavirus vaccine in a fake arm made of silicone.

A nurse in the northern city of Biella, Filippa Bua, said she could tell right away that something was off when a man presented the phony limb for a shot on Thursday.

"When I uncovered the arm, I felt skin that was cold and gummy, and the color was too light,’’ Bua told Italian newspaper Corriere della Sera.

She said she initially thought the 57-year-old man was an amputee and had mistakenly offered the wrong arm. She lifted his shirt and saw a silicone arm.

"I understood immediately that the man was trying to avoid the vaccination by using a silicone prosthetic, into which he hoped that I would inject the drug, unaware, Bua said.

The nurse said the man acknowledged he did not want a vaccine but to obtain a "super" health pass, which from Monday will be required to enter restaurants, cinemas, theaters and other venues in Italy.

He had already been suspended from work because of his refusal to get vaccinated, which Italy requires for medical personnel.

The nurse said the man was courteous and left the vaccination center after the failed attempt.

"We stopped and reflected, and we understood that this wasn’t just a surreal situation, but a real attempt at fraud,’’ Bua said. She and others at the vaccination site turned paperwork over to superiors so they could report the case, which has been given to prosecutors.

While Italy’s vaccination rate is relatively high at 85% of the currently eligible population ages 12 and over, people in the age range from 30 to 59 have proven the most resistant to vaccinations, with nearly 3.5 million still not having received their first doses.