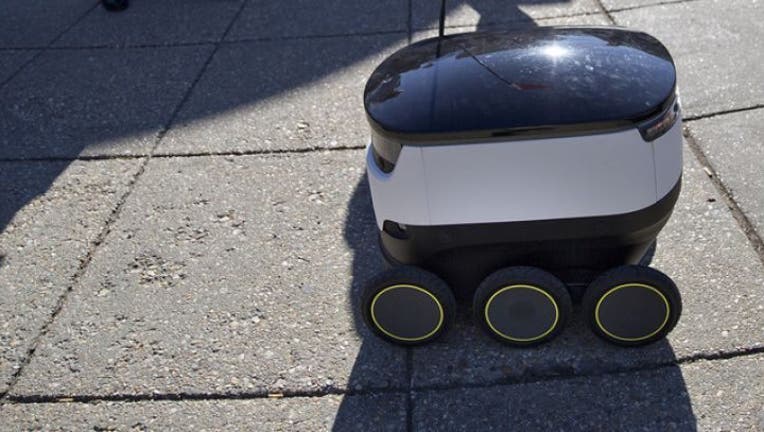 NEW YORK - A British company has urged residents not to worry if they see one of its robots in distress after a delivery robot fell into a canal.

Milton Keynes resident Bex Morgan said she was walking her dog when she saw the Starship Technologies robot drive “straight into the canal.” She posted on Facebook about the incident, and the pictures started circulating social media, prompting a statement from the company.

"If people see a robot not moving, they shouldn’t do anything because we’re aware of where every single robot is to the nearest inch and it may just be having a rest,” a Starship spokesman told the MK Citizen. "However, if on the rare occasion someone sees a robot swimming or in any other odd situation then feel free to email community@starship.xyz with the details."

If an unauthorized person tries to pick the robot up, the robot will “screech” loudly.

“We have had incidents. But we feel comfortable with where we’re at right now, because no one has managed to steal one or anything like that,” spokesman Henry Harris-Burland told The Engineer magazine.

Starship rolled out the robots in 2015, with the beer cooler-sized machines bringing small deliveries to residents in various test-pilot neighborhoods. Milton Keynes has hosted the first commercial deployment in the UK in March, just as Britain entered its coronavirus lockdown, the Guardian reported.

The robots are a regular sight in Milton Keynes and use 10 cameras, ultrasound, radar and GPS to travel along pavements and cross streets to make their deliveries.

“I’ve got a fairly young demographic in my ward, and they love it,” Sam Crooks, the mayor of Milton Keynes, said. “There was obviously a burst of use at the beginning, because of the novelty, but already it’s just a part of people’s routines.”