GUAYANILLA, Puerto Rico - Thousands of people fled their homes on Puerto Rico's southwest coast on Tuesday after a 10-day string of earthquakes crescendoed in a powerful magnitude 6.4 temblor that crushed an elderly man, injured at least eight other people and sent buildings tumbling to the ground.

Hours after the predawn quake cut power to the entire U.S. territory, a large swath of southern Puerto Rico was shaken by smaller quakes late into Tuesday afternoon. Seismologists said there was no way of knowing when the series of quakes would ease, prompting Puerto Ricans to stay with friends or family or even sleep outdoors far from the coast, fearful of collapsing buildings or a tsunami.

"I'm stringing up my hammock," said Miguel Santana, a 38-year-old resident of the southwest coastal town of Guayanilla.

Alexandra Colberg, 27, moved out of her deeply cracked home in the nearby town of Guánica with her husband and four children, packing their mattresses, a refrigerator, a set of curtains and their clothes into two pickup trucks. 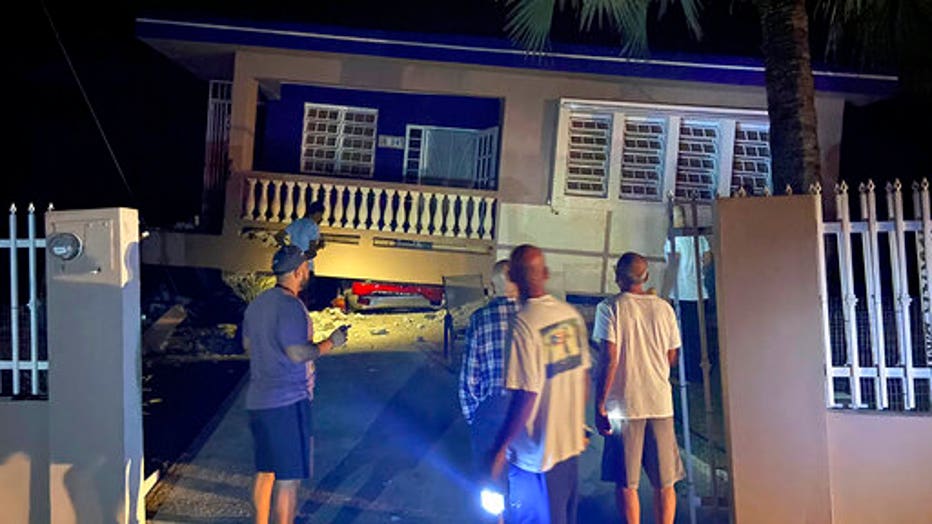 A collapsed building with car crushed underneath, following an earthquake in Yauco, Puerto Rico, Jan. 7, 2020. All the occupants of the home are reported to be uninjured. (J. Miguel Santiago Twitter via AP)

"What do I do with this?" asked her 9-year-old son, holding a tiny pink bucket with a pet fish that survived the earthquake.

"We need to go, because if not we could end up falling down there," Colberg said as she gestured to the ground floor from the second story of her home. She and her family soon left for the mountain town of Hormigueros, where Colberg's grandmother lives.

Most of the damage occurred in Guánica, where a three-story school collapsed. Preparing to start a 12-hour shift to protect it from looters was María Mercedes Alcázar, a 63-year-old private security guard who said she didn't fear earthquakes, but her children, aged 37 and 42, were jittery.

A friend who dropped Alcázar off at the school, 49-year-old construction worker Mario Cruz, said he remains terrified.

"I'm not right, emotionally," he said. "I don't want to feel another one."

Puerto Rico's governor, Wanda Vásquez, declared a state of emergency and activated the territory's National Guard. She said some 300,000 households remained without running water late Tuesday, and several hundred people were in shelters.

Tuesday's quake was the strongest to hit Puerto Rico since October 1918, when a magnitude 7.3 quake struck near the island's northwest coast, unleashing a tsunami and killing 116 people.

Puerto Rico is in an area prone to earthquakes, but Tuesday's quake was unusual because it struck just off the southern coast, said John Bellini, a geophysicist with the U.S. Geological Survey in Golden, Colorado.

Most large quakes in the area happen some 60 to 80 miles off Puerto Rico's north coast, he said. Since 1950, there have now been five quakes of magnitude 6.0 or larger near Puerto Rico, and all the others have been far to the north, he said.

But since Dec. 31, more than 950 quakes and aftershocks have been recorded in the area of Tuesday night's event, most too weak to be felt, according to USGS.

The Caribbean islands are prone to quakes because they're at a spot where two tectonic plates meet in a complex dance. The North American plate is being driven below the Caribbean plate in some parts of the area, and the two plates are also rubbing each other sideways, Bellini said. As the plates move, they build up stress, eventually causing an earthquake.

The unusual location of Tuesday's quake means scientists don't have a detailed historical record to draw upon in trying to assess future activity, Bellini said. Residents can expect aftershocks for some weeks, but they will peter out in both size and frequency and eventually end, he said.

The USGS said that while it's virtually certain there will be many aftershocks in the next week, the chance of a magnitude 6 quake -- similar to Tuesday's -- or stronger is around 22 percent.

A major earthquake knocked out power across Puerto Rico.

The risk of a magnitude 7 quake or bigger is extremely low, USGS said.

Teacher Rey González told The Associated Press that his uncle was killed when a wall collapsed on him at the home they shared in the city of Ponce. He said 73-year-old Nelson Martínez was disabled and that he and his father cared for him.

Eight people were injured in Ponce, officials said. Hundreds of people sat in the streets of the city, some cooking food on barbecue grills, afraid to return home for fear of structural damage and aftershocks.

U.S. President Donald Trump was briefed on the earthquakes in Puerto Rico in the past month, including the one on Tuesday, said Judd Deere, White House deputy press secretary.

"Administration officials, including FEMA Administrator Pete Gaynor, have been in touch with the governor and her team today, and we will continue to monitor the effects and coordinate with Puerto Rico officials," Deere said.

In the historic district of Ponce, authorities evacuated more than 150 people from two buildings they said were in danger of collapsing. Among them were more than two dozen elderly patients from a nursing home who sat in their wheelchairs in silence as the earth continued to tremble.

Much of the damage was reported in Guayanilla, where the mayor said the municipality won't have power for at least two weeks.

Ruth Caravallo, 73, held on to the church's wrought-iron gate as she cried.

"My sister was the secretary here," she said. "My husband died two months ago, and I held services for him here."

Around the corner, the Rev. Melvin Díaz spoke to a friend on the phone and described damage to the church's icons.

"The Virgin fell, Saint Judas is intact," he said.

Díaz surveyed the collapsed church and said he was optimistic about rebuilding.

"This isn't a problem, it's a challenge," he said.

Some people rode their bicycles around the public plaza while others sought shade under lush trees that shook occasionally as the aftershocks continued.

A magnitude 5.8 quake that struck early Monday morning collapsed five homes in Guánica and heavily damaged dozens of others. It also caused small landslides and power outages. The quake was followed by a string of smaller temblors.

The shake collapsed a coastal rock formation that had formed a sort of rounded window, Punta Ventana, that was a popular tourist draw in Guayanilla.