Remarkable coincidence helps Dallas man get his lost ring back

After a Dallas man lost his wedding ring on a Florida beach he assumed it was gone forever. But in a rare coincidence, the woman who found it is also from North Texas and was determined to see it returned to its owner.

DALLAS - A diamond wedding ring lost on a Florida beach was returned to its Dallas owner. In a rare coincidence, the woman who found it is also from North Texas.

Chris Ramirez and Charlotte Duffey were perfect strangers, both living in North Texas, who crossed paths in a way that’s hard to believe.

Ramirez is the owner of Revamp Barber Studio. He and his wife, who works as a stylist, took a family vacation to Fort Lauderdale in June.

While at the beach, he made a big mistake.

"The water was a little choppy, so I decided to take my ring off, and I put it in the diaper bag. While moving from where we were sitting to back to the resort, the ring somehow fell out. It ended up in the sand," he said. 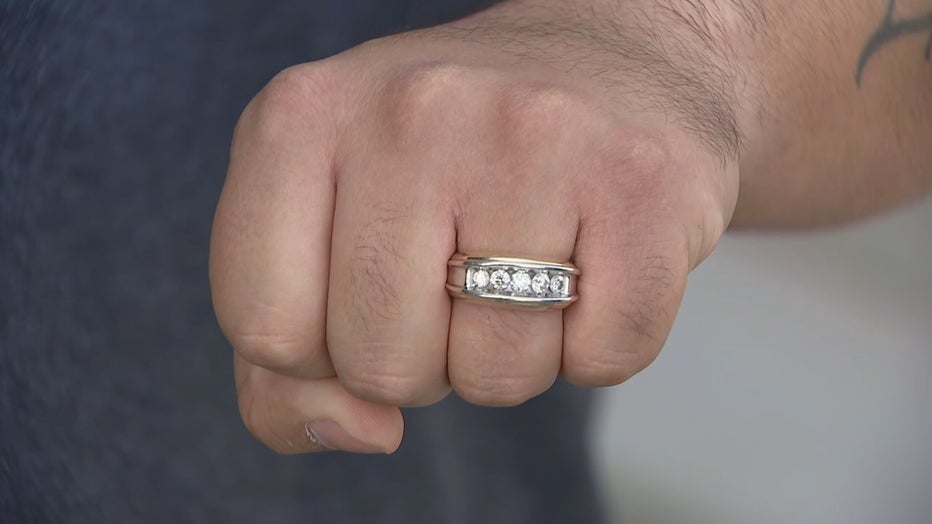 He knew his chances were slim, but when he got back to Dallas, he said something told him to call the resort near the beach just to check.

"And they said they hadn’t received anything. Then right before we hung up the lady said, ‘Well, actually, there is someone who found a ring at the beach,’" Ramirez said.

That someone was Duffey, a woman from Mansfield who was also vacationing in Florida.

She said she saw something sparkling in the sand.

"I picked it up and told my daughter, ‘Oh my God, this is a wedding ring. I wonder if I can find who this belongs to,’" she said.

Her daughter didn’t think she’d be able to find the owner, but Duffey followed her gut.

She’s been married for close to 40 years, so she knew how important the ring might be to someone. She wanted to make sure it got back to the rightful owner.

After letting the resort know she found the ring, she gave them her information. Her plan was to mail it back to whoever provided an accurate description of the ring and a photo to prove it was theirs.

"I sent it to her via email. We just matched the ring with the photos and sure enough, that was it," Ramirez said.

"I was shocked. This is just another lesson that my mom has taught me in life. It did work out and then for them to be here in Dallas, I felt like it was God," said Duffey’s daughter, LaTosha Duffey.

It’s a good deed that proves a little faith can go a long way.

"It feels good to know there’s honest people out there. She could have easily found it and just kept it for herself. The fact that she was honest is what’s important," Ramirez said.

"It makes me feel good that there is still some good people in the world, especially in the world that we live in now," his wife, Marissa Ramirez, added.

FOX 4 was there when the two families met for the first time and the ring was returned to its owner.

Ramirez said he’s pretty sure he will never lose his ring again.

LaTosha Duffey is a celebrity DJ and reality TV star who travels the world. She said this is one trip she won’t forget.