During his interrogation, Gov. Andrew Cuomo insisted he was careful in how he behaved around women and said several of his accusers had misrepresented what happened.

ALBANY, N.Y. (AP) - Over an 11-hour interview with investigators last July, former New York Gov. Andrew Cuomo defiantly denied allegations he sexually harassed women and sparred with the lawyers questioning him, accusing one of being out to get him, according to a transcript released on Wednesday.

New York Attorney General Letitia James made public hundreds of pages of transcripts of interviews conducted by two independent lawyers, hired by her office, during their monthslong investigation into the sexual harassment allegations against Cuomo.

In their interviews with investigators, conducted over several months, the women accusing Cuomo of misconduct laid out their horror stories of working for a boss who made comments about women's looks, asked questions about sex and gave inappropriate touches and kisses.

The transcripts covered interviews done with 10 of the women who accused Cuomo of misconduct, plus the interview that Cuomo himself gave on July 17.

Most of the allegations, and Cuomo's defenses, have been aired publicly before in interviews, news conferences and a report published by James' office in August that sparked public outrage and pushed Cuomo to resign from office. But the transcripts offer a new level of detail on the allegations against the Democrat and Cuomo's confrontational interview.

Attorney General Letitia James has released hundreds of pages of interview transcripts and exhibits in connection with the sexual harassment investigation that brought down Gov. Andrew Cuomo.

During the interrogation, Cuomo insisted he was careful in how he behaved around women and said several of his accusers had misrepresented what happened. He also bristled at a groping allegation by an aide, Brittany Commisso, who said Cuomo had pulled her toward him and grabbed her breast in the governor's mansion.

Cuomo, 63, said it would be "not even feasible" for him to have done that, especially since he believed his conduct was constantly under scrutiny by enemies, including one of the lawyers then investigating him, former acting U.S. Attorney Joon Kim.

"You've investigated me for six years," Cuomo told Kim, referring to corruption investigations conducted by federal prosecutors during Kim's tenure, including one that sent one of Cuomo's close friends to prison. "I would have to lose my mind to do some — such a thing. It would be an act of insanity to touch a woman's breast and make myself vulnerable to a woman for such an accusation."

"Numerous people have tried to set me up," Cuomo said. "I'm always wary of people. I have phenomenal precautions. It would be an act of insanity." 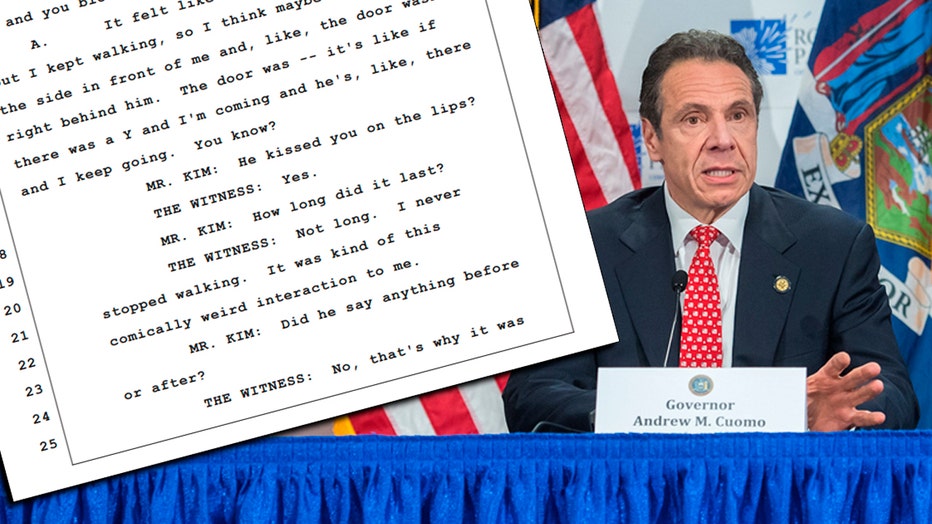 In her interview with investigators, Commisso said Cuomo made comments about her appearance, called her "honey" and asked her about her sex life. She said when she wore a dress rather than pants to work, the governor said it was "about time that you showed some leg."

She also described the alleged assault at the governor's mansion, saying that even as she pushed Cuomo away, she worried she would be the one who got in trouble if she slapped him or made a scene.

In her interview with investigators, Lindsey Boylan, a former economic development official who was the first woman to publicly accuse Cuomo of harassment, called his famously caustic administration "a terrible environment for everyone, whether they were sexually harassed or not." But she told the investigators harassment was what spurred her to come forward. "If this was just a toxic work environment, we wouldn't be sitting here."

A judge has granted a request by prosecutors for more time to build their case against former Governor Andrew Cuomo.

Boylan said Cuomo regularly commented on her appearance, "constantly" looked at her legs and once kissed her on the lips without her consent.

When the governor's dog climbed on her, Cuomo said, "Well, if I was the dog, I'd mount you, too."

She and other women described Cuomo as, at turns intensely demanding, furious or egregiously inappropriate.

Cuomo asked Boylan to sing him "Happy Birthday" over the phone and former aide Charlotte Bennett to sing "Danny Boy" as a hazing ritual. The governor pounded his fist into a door in frustration once and on another occasion told a top aide he was lucky he didn't throw him out the window, according to testimony.

Bennett, who has alleged Cuomo quizzed her about her sex life in a manner that made her think he was hitting on her, said staffers called to meet with Cuomo came in with dread and distress and would sometimes be in tears afterward.

Cuomo announced his resignation on Aug. 10, a week after James released a report concluding that Cuomo had sexually harassed at least 11 women.

Cuomo's attorneys have previously called for the release of transcripts from the investigation. But Cuomo attorney Rita Glavin criticized the attorney general for the partial release while the criminal charge is pending.

"The Attorney General deliberately harms a pending case by broadcasting to each witness what other witnesses have testified to, and spreading false and salacious hearsay and rumors," Glavin said in a statement.

The state Assembly had been considering impeaching Cuomo when he resigned. A legal team hired by the Assembly's judiciary committee has continued to work on a report on Cuomo's conduct in office. The committee's chair said Wednesday that committee members had been invited to review the report in Albany on Nov. 18 and 19 ahead of its planned public release.

In his interview with investigators, Cuomo portrayed many of the women accusing him as having misrepresented their interactions. Asked repeatedly about allegations of harassment, he started answers with the word "no," more than 350 times and uttering the words "never happened" eight times.

During one lengthy exchange, he refused to offer a simple answer to a question about whether a woman mentioned in one bit of testimony was his girlfriend.

"How do you want to define 'girlfriend?'" Cuomo asked.

"Did you date her?" Kim asked.

"How do you want to define 'date?'" Cuomo countered.

Cuomo suggested Kim was a puppet doing the bidding of his predecessor in the U.S. attorney's office, Preet Bharara, and "his rabbi," Senate Majority Leader Chuck Schumer.

"You know that I said that Preet and you were unethical and should not be considered for attorney general," Cuomo told Kim. "Preet Bharara has political aspirations, may have political aspirations against me. His rabbi, your rabbi, Senator Schumer called for my resignation."

Kim told Cuomo he wasn't "engaging" with him on those types of statements, but said "I wouldn't want the silence to go as some kind of acceptance of it."

Cuomo closed the deposition with another jab at Kim: "I would like to say it was a pleasure, Mr. Kim. But I'm under oath."