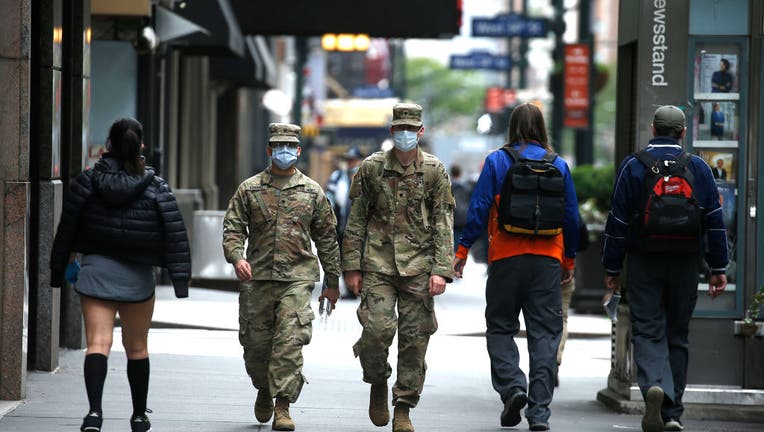 US Army personnel with protective masks walk during the coronavirus pandemic on May 22, 2020 in New York City. COVID-19 has spread to most countries around the world, claiming over 339,000 lives and infecting over 5.2 million people (Photo by John La

NEW YORK (AP) — New York Gov. Andrew Cuomo dropped the state’s absolute ban on gatherings of any size Friday, issuing an executive order saying up to 10 people are now allowed to be together as long as they abide by other social distancing guidelines adopted during the coronavirus pandemic.

The order, issued on the eve of the Memorial Day weekend, represents one of the biggest steps yet the state has taken to loosen rules adopted in March that have barred anyone but essential workers from getting together unless they live in the same household.

It doesn't necessarily pave the way for the backyard barbecues and group picnics that are a staple of the holiday. The order still requires people assembling to follow “social distancing protocols and cleaning and disinfection protocols required by the Department of Health.”

That means people still need to stay at least 6 feet away from other people, or wear a face covering when they cannot maintain that distance in public.

New Jersey has adopted similar rules, allowing groups of up to 25 outdoors and indoor gatherings of up to 10 people. Connecticut has allowed restaurants with outdoor seating to reopen.

Cuomo had earlier in the week signed an order allowing gatherings of as many as 10 people only for religious services and Memorial Day commemorations.

That restriction drew a lawsuit from the New York Civil Liberties Union, which said if it was safe to gather for the purpose of honoring veterans and practicing religion, the Constitution requires the same right be extended to people gathering for other reasons.

The NYCLU filed the lawsuit on behalf of New York City resident Linda Bouferguen, who the group says was twice arrested outside City Hall for protesting the state’s shutdown. She wants to organize another protest Saturday.

NYCLU Legal Director Christopher Dunn said in a statement that the organization was “glad to see the governor reverse course.”

“The right to protest and exercise free speech is the foundation of all our other liberties, and during a crisis is exactly when we need to be most vigilant about protecting it. Health experts, elected officials, and police officers all agree that people can be outside safely while practicing social distancing, and it’s critical that lawmakers create guidelines and direct law enforcement uniformly.”

Cuomo spokesman Rich Azzopardi said the new order is in line with Centers for Disease Control and Prevention guidance, which says that gatherings of up to 10 people are safe if people socially distance.

“Please be safe and wear a mask,” he added on Twitter.

The coronavirus killed another 109 people in the state Thursday. The daily death toll is down dramatically from early April, when nearly 800 New Yorkers were dying each day, but the drop has been very slow. Around 5,000 people remain hospitalized.

Another 1,700 people in the state tested positive for the virus Thursday. Some medical experts have warned that loosening restrictions on gatherings too quickly could lead to a new surge in infections.

The pandemic has killed at least 23,200 people in the state, not counting another 4,800 people in New York City who died before their COVID-19 diagnosis could be confirmed by a lab test.