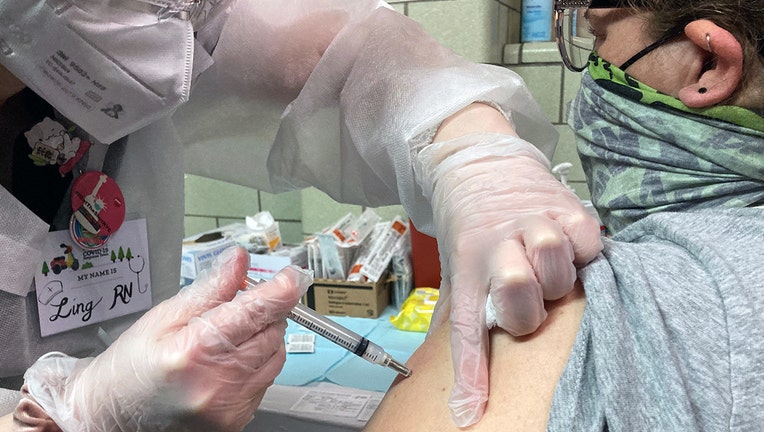 A nurse administers a COVID-19 vaccine shot to a woman at a vaccination site in Queens, N.Y. (FOX 5 NY Photo)

As demand for COVID-19 vaccines collapses in many areas of the U.S., states are scrambling to use stockpiles of doses before they expire and have to be added to the millions that have already gone to waste.

State health departments told The Associated Press they have tracked millions of doses that went to waste, including ones that expired, were in a multi-dose vial that couldn't be used completely or had to be tossed for some other reason like temperature issues or broken vials.

Nearly 1.5 million doses in Michigan, 1.45 million in North Carolina, 1 million in Illinois and almost 725,000 doses in Washington couldn't be used.

The percentage of wasted doses in California is only about 1.8%, but in a state that has received 84 million doses and administered more than 71 million of them, that equates to roughly 1.4 million doses. Providers there are asked to keep doses until they expire, then properly dispose of them, the California Department of Public Health said.

The problem is not unique to the U.S. More than a million doses of the Russian Sputnik vaccine expired this week in Guatemala, because nobody wanted to take the shot.

Vaccination program managers say that tossing out doses is inevitable in any inoculation campaign because of the difficulty in aligning supply and demand for a product with a limited shelf life.

But the coronavirus pandemic has killed nearly 6 million people and shattered economies across the globe, and every dose that goes to waste feels like a missed opportunity considering how successful the vaccines are in preventing death and serious disease.

It also comes only about a year after people desperate to get the vaccine attempted to jump in line to get ahead of those deemed higher priority. Hospital board members, their trustees and donors around the U.S. got early access or offers for vaccinations, raising complaints about favoritism and inequity at a time when the developing world had virtually no doses.

Dr. Jay Varma comments on the new data from a study of the efficacy of Pfizer's COVID-19 vaccine on children between 5 and 11 years old.

And many poorer nations still have low vaccine rates, including 13 countries in Africa with less than 5% of their population fully vaccinated. They are plagued by unpredictable deliveries, weak health care systems, vaccine hesitancy and some supply issues, although health officials say inventory is markedly stronger than earlier in the pandemic.

In fact, supplies are so strong that the Centers for Disease Control and Prevention now advises doctors that it's OK to discard doses if it means opening up the standard multi-dose vials to vaccinate a single person and the rest has to be tossed.

"Pivoting to what's happening now, you have much more production and distribution to low-income countries," said Dr. Joseph Bresee, who directs the COVID-19 Vaccine Implementation Program at the Task Force for Global Health in Decatur, Georgia. "The issue of some stockpiles in the U.S., Germany and Japan, that are not redistributed to sub-Saharan Africa, it's less of an acute problem now because vaccine production and distribution is in high-gear right now serving those low-income countries."

The Department of Health and Human Services also said that redistributing states' excess doses to other nations is not feasible because of the difficulty in transporting the shots, which must remain cold, in addition to not being cost-effective because of the relatively small number concentrated at sites.

Of the 688 million doses sent to states, 550 million to 600 million have been administered, HHS said Monday. The vaccines authorized in the U.S., made by Pfizer, Moderna and Johnson & Johnson, can last for up to about six months from the time of manufacture.

A senior HHS official familiar with vaccine distribution plans would not say how many doses nationwide have already been marked as wastage, stating that there were too many variables to effectively calculate a nationwide rate and that states would have the most accurate figures. The official took issue with the word "wastage," saying it implies mismanagement when states are effectively overseeing their inventories.

The CDC, however, uses the term "wastage" on its website and asks states to report their numbers. The agency did not reply to requests for those figures.

The average number of Americans getting their first shot is down to about 80,000 a day, the lowest point since the U.S. vaccination campaign began in December 2020. About 76% of the U.S. population has received at least one shot and roughly 65% of all Americans are fully vaccinated.

With demand so low, states will undoubtedly be confronted with more waste in the months ahead, although they will benefit from any booster expansions.

Idaho, for example, has 230,000 doses on hand but is only averaging fewer than 2,000 doses administered a week.

Oregon's vaccination rate is slightly higher than the national average, but the health authority there said last week that they have "significant excess vaccine on hand" because of the recent drop in demand. The state is trying to use up as many of the 716,000 doses in its inventory as possible.

Rhode Island has the highest percentage of residents who are fully vaccinated in the nation, at slightly more than 80%, but the health department reported having 137,000 doses on hand last week. Health officials say they need them for a big push to increase the vaccination rate for booster doses.

Health officials in some states have developed "matchmaker" programs to connect vaccine providers with excess doses with providers seeking doses. Many said they're attempting to redistribute doses with expiration dates that are quickly approaching. New Jersey has a task force that has transferred more than 600,000 doses around the state since June. West Virginia has offered to transfer Pfizer adult doses to nearby states.

Immunization managers have been asking for single-dose vials, especially for pediatricians, but it may not work for manufacturers to package it that way yet, said Claire Hannan, executive director at the Association of Immunization Managers. She said wasting vaccine "just can't be an issue."

"We tell this to providers, but the most important thing is getting people vaccinated. And that's hard when the demand goes down. You don't have constant flow," she said. "But that's just a necessary evil I guess."

HHS said states are ordering prudently, paralleling the drop in demand. The minimum order for Pfizer used to be nearly 1,200 doses but now it's 100, and Moderna reduced the number of doses per vial, the agency said.

"Given what we've seen in terms of the number of people still unvaccinated, I do think finding any way to get the shot in arms, even at the expense of potential wastage, is still important," said Katie Greene, an assistant research director at the Duke-Margolis Center for Health Policy.