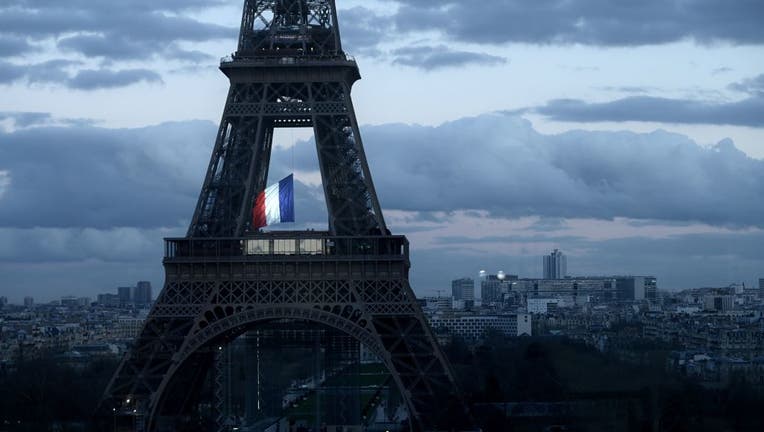 The French flag flies from the Eiffel Tower during a ceremony on France's first National Day Honoring the Victims of Terrorism on March 11, 2020, in Paris. (Photo by PHILIPPE LOPEZ/POOL/AFP via Getty Images)

PARIS - The global outbreak of a novel coronavirus has triggered the closure of one of the world's most iconic landmarks -- the Eiffel Tower in Paris.

La Tour Eiffel, the company that runs the Eiffel Tower, tweeted the announcement of the indefinite closure Friday.

RELATED: Europe travel ban: Here’s what you need to know about the 30-day restriction triggered by COVID-19

Coronavirus: What to know about the Europe travel restrictions

They only apply to certain individuals and countries.

"In the context of the #COVID19 outbreak and due to the government health measures announced today, the #EiffelTower closes today, from 9pm, for an indefinite period of time," the tweet said.

Tourists who apparently had pre-purchased tickets to tour the tower asked about securing refunds in the Twitter thread. It was not immediately clear how or if refunds would be granted.

The Eiffel Tower wasn't the only tourist destination in Paris adapting to the COVID-19 pandemic. The Louvre was no longer taking cash because of the coronavirus outbreak.

The world's most-visited museum shifted to card-only payments as part of measures that helped persuade employees worried about getting sick to return to work on March 4. Louvre workers who guard Leonardo da Vinci's “Mona Lisa” and other masterpieces walked off the job March 1, fearful of being contaminated by the museum’s flow of tourists from around the world.

French President Emmanuel Macron announced in a tweet on Friday that an extraordinary summit of G7 leaders would be held Monday by videoconference to coordinate efforts on a vaccine and treatment of the COVID-19 virus, and "work on an economic and financial response."

Macron had announced during an address to the nation on coronavirus Thursday night his plan to try to organize a G7 summit. He said he would be discussing that Friday with President Donald Trump as the United States currently holds the G7 presidency.

"It's not division that will allow us to respond today to a world crisis," Macron said during his solemn address to France in which he announced the closing of all schools and other measures.

His reference to divisions apparently referred to Trump's announcement of sharp restrictions on travel to the United States from 26 European countries — without advance consultations.

Coronavirus deaths soared to their highest levels ever in Italy Friday, three weeks to the day since the nation's first case was declared, and U.S. President Donald Trump prepared to invoke emergency powers as nations around the world warned of nearly wartime measures to contain the pandemic.