The U.S. lag in coronavirus testing is “a failing,” a top federal health official said Thursday.

NEW YORK (AP) - The U.S. lag in coronavirus testing is “a failing,” a top federal health official said Thursday, and public health experts say they still don't have a good understanding of how widely the new virus has spread.

The effort initially was hobbled by delays in getting testing kits out to public health labs, but the stumbles have continued, leading scientists to conclude that the virus has already spread far wider than government officials are reporting.

U.S. health officials, for example, promised nearly a month ago to tap into a national network of labs that monitor for flu. That system is only just getting started.

On Thursday, Dr. Anthony Fauci of the National Institutes of Health agreed that the U.S. needs to improve how it’s testing.

“The system is not really geared to what we need right now,” he said. “That is a failing. It is a failing, let’s admit it.”

Large-scale testing is a critical part of tracking the spread of infectious diseases and allocating resources for treatment. The lack of comprehensive figures means U.S. health providers could quickly be overwhelmed by undetected cases.

As of Thursday afternoon, the Centers for Disease Control and Prevention was reporting about 1,260 U.S. illnesses — a number that trailed independent researchers, who are adding reports from individual states more quickly.

But some experts believe any number based on test results of individual patients is a dramatic undercount. Researchers at Cedars-Sinai Medical Center in Los Angeles this week estimated that the true count of infections was close to 9,000 — about two weeks ago.

“I expect there are more infected individuals now,” said one of the researchers, Dr. Jonathan Braun. “This means that the level of disease in the US is much greater than has been reported by actual testing.”

There are no official numbers from the federal government on the country’s overall testing capacity. One of the only comprehensive estimates comes from Dr. Scott Gottlieb, the former FDA commissioner who is now a resident fellow at the American Enterprise Institute, a conservative think tank.

As of Thursday, his group estimated U.S. labs could process results for more than 20,000 patients per day. The figure is based on a combination of publicly reported information and historical estimates from government, private and academic labs. It reflects the total number of patient results that could be processed in a day, not the current number being run.

Whatever the actual number, the U.S. effort is trailing other nations.

South Korea, a country one-sixth the size of the U.S. in terms of population, is reportedly testing 15,000 people per day. CDC Director Dr. Robert Redfield noted that officials there are using automated, high-volume testing systems capable of processing thousands of samples at a time. In contrast, the equipment used by most U.S. state and local labs requires technicians to manually process each sample in small batches, sometimes 100 or fewer per day. 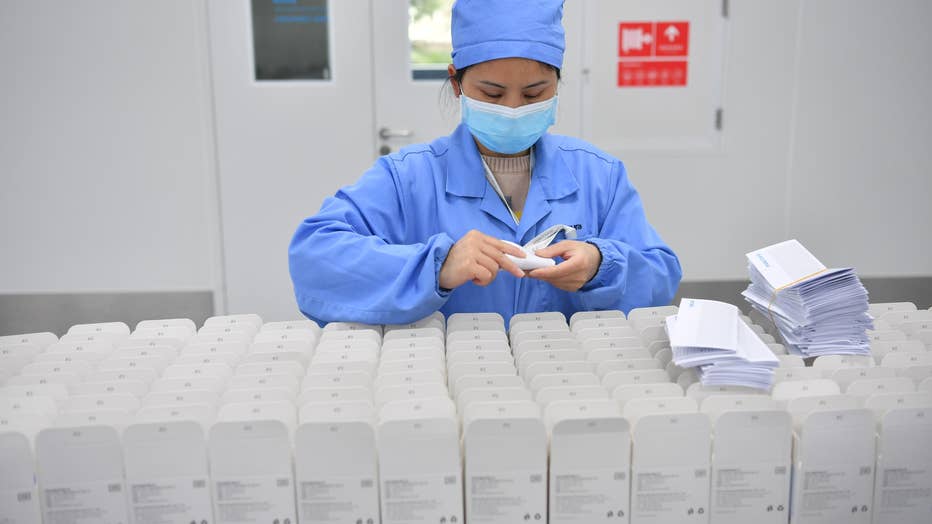 The testing process in the U.S. requires mixing various chemicals to setup chain reactions that extract genetic information from patients’ swabs. Each lab must fine-tune the process on its own equipment, something experts have likened to perfecting a new recipe.

Unlike countries with centralized, government-based health care systems, the U.S. response is fragmented between public labs and private efforts by hospitals, universities and diagnostic companies.

U.S. officials have boasted of shipping well over 1 million tests to labs across the country. But it’s unclear how many have actually been used on patients, because tests have gone to some private labs and hospitals that don't report into the CDC, Health and Human Services Secretary Alex Azar told reporters earlier this week.

Azar said the government is working to set up a system to combine government testing figures with those of outside laboratories.

Government officials have pledged that large private testing companies like Quest Diagnostics will drastically expand U.S. capacity. A Quest spokeswoman on Wednesday said it could take up to six weeks to ramp up to testing tens of thousands of samples per week. The company expects to complete several thousand tests by the end of this week.

On Feb. 14, the CDC's Dr. Nancy Messonnier said the agency was “in the coming weeks" going to use labs in five cities to provide a good look at whether coronavirus might be appearing. The idea: When patients tested negative for flu, their specimens would go through coronavirus testing to see if the new bug was what had been causing their flu-like symptoms.

“Results from this surveillance would be an early warning signal, to trigger a change in our response strategy” if cases started appearing, she said.

But earlier this week, nearly a month after the announcement, doctors and scientists were still awaiting news that the surveillance system was up and running.

Late Thursday afternoon, the CDC revealed some labs had begun the testing. But the list of test sites had changed, and the agency didn't explain why.

Five other locations are working to get surveillance testing going, a CDC spokeswoman said. They are New York City; Orange County and Solano in California; and the states of Hawaii and Washington.

The agency did not immediately detail what the so-called sentinel testing sites have found.