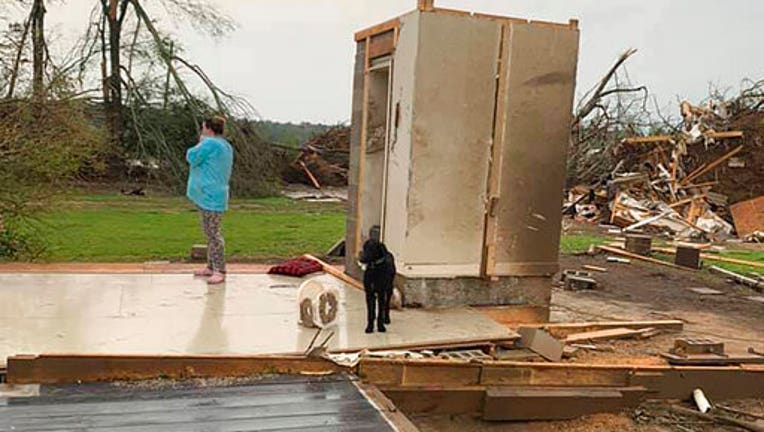 MOSS, Miss. - With a tornado bearing down on their rural home, Andrew Phillips told his wife to grab their two children and get into the safest place they had: A small room built from concrete blocks.

It was a decision that likely saved four lives.

While the rest of their home was obliterated in a matter of seconds Sunday afternoon, Phillips, wife Amber and their kids, ages 2 and 6 months, survived without a scratch inside their safe room, which doubles as a closet.

The family had been watching an online Easter service on Sunday morning. Phillips, a volunteer firefighter then started tracking the weather online and with the help of a fire radio. Realizing a tornado was close by, Phillips told Amber to get in the safe room with the kids and joined them. Then, after ducking outside and seeing the funnel cloud, he grabbed more bedroom pillows and jumped back inside, shielding his family with his body.

“I was in there about 20 seconds when it hit,” he said. “The house is gone, everything but the safe room.”

The family had been living in the house only a few weeks. The safe room was one of the reasons he bought it, Phillips said.

Clothes were still hanging neatly inside the vault-like structure after the tumult. But the man’s meat-processing business next door was smashed, as were their cars.

“I’m just going to let the insurance handle it and trust in the good Lord,” Phillips told The Associated Press by phone Monday. “We’re going to try to come back bigger and better.”