Under a new law, the disciplinary records of several police officers have been released. Among the records are those of former Officer Daniel Pantaleo, who was fired in 2019 in connection with the death of Eric Garner five years earlier.

NEW YORK (AP) - After years of secrecy, a contentious leak to a news website, and a recent change in state law, New York City's police watchdog agency disclosed Monday the complaint history for the police officer fired for the 2014 chokehold death of Eric Garner.

Records showing former Officer Daniel Pantaleo was the subject of seven misconduct complaints prior to Garner's death were provided to the Associated Press by the Civilian Complaint Review Board in response to a request under a new state law making police disciplinary files public.

Pantaleo's complaint history was first revealed by the now-defunct website Think Progress in 2017 amid a legal dispute over whether the records could be made public. At the time, state law shielded police personnel files from disclosure. A review board investigator resigned after being identified as the leaker.

The cloak-and-dagger approach to the records changed this month when state lawmakers, spurred by protests over George Floyd's death in Minneapolis, changed a law that for decades had blocked police disciplinary records from public disclosure.

The Civilian Complaint Review Board moved quickly to respond to requests for the newly available records. The agency on Monday also provided complaint histories for several other officers recently accused of misconduct.

Officer Vincent D'Andraia, who was charged with assault after a bystander recorded him violently shoving a protester to the ground on May 29, had five complaints in his five years on the force. The review board substantiated just one of them, stemming from a frisking incident last year, and recommended he receive additional training. 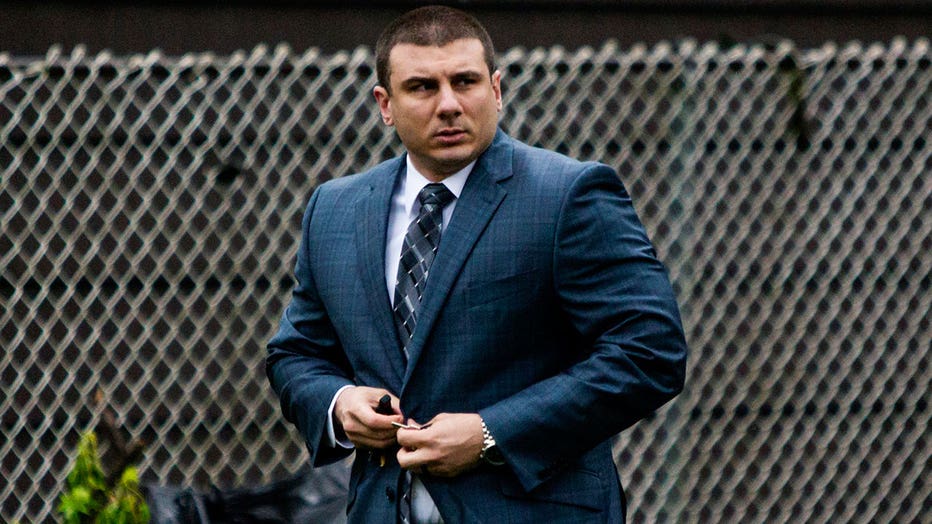 Officer Francisco Garcia, who faces disciplinary charges after a violent arrest during social distancing enforcement on May 2, was the subject of complaints in four prior cases, none of which resulted in discipline. A complaint last December that Garcia used offensive, gender-related language was closed because of pending litigation.

As for Pantaleo, allegations were substantiated in two of the cases reported to the review board and he was docked two vacation days as punishment for a June 2012 stop and frisk incident, according to the records.

Another substantiated complaint to the city's Civilian Complaint Review Board, stemming from a December 2011 vehicle search, ended with Pantaleo ordered to receive additional training.

The review board's records do not necessarily reflect all disciplinary matters involving Pantaleo or other officers. The NYPD, which also investigates complaints through its internal affairs bureau, has yet to respond to a request for its disciplinary records.

Bystander video showed Pantaleo, who is white, wrapping his arm around the neck of Garner, who is Black, for about seven seconds as they struggled against a glass storefront window and fell to a Staten Island sidewalk. Officers were trying to arrest Garner for selling untaxed cigarettes.

Garner's dying gasps of "I can't breathe" have again become a rallying cry among police reform activists after Floyd echoed those words as a Minneapolis officer pressed a knee into his neck, leading to his death last month.

Pantaleo joined the force in 2006. It wasn't until 2009 that he was the subject of a review board complaint — an unsubstantiated allegation that he refused to obtain medical treatment for someone. The last complaint prior to Garner's death was an unsubstantiated use of force claim in March 2013.