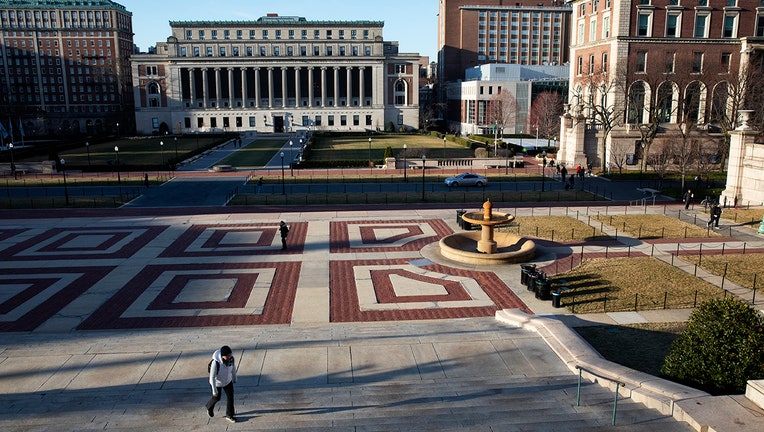 A woman walks on the Columbia University campus in New York, March 9, 2020. (AP)

CAMBRIDGE, Mass. - College seniors began making tearful goodbyes, not knowing if they'd return to see friends on campus. Some were heading to homes without the internet, leaving them to wonder if they could keep up with online classes. And some worried about finding a way to afford a flight on only a few days' notice.

As dozens of universities cancel in-person classes and move instruction online amid fears over the new coronavirus, thousands of students are left scrambling to find their way home while their professors puzzle over how to move weeks of courses to the internet.

Schools nationwide announced plans to cancel in-person classes through spring break or beyond amid fears about the virus' spread. Some are pausing campus classes for a few days or weeks, including Columbia, Princeton and Indiana University, while others are canceling classes through the end of the term, including Stanford and Harvard.

On Tuesday, Harvard undergraduates were told to leave campus by Sunday and stay home until the end of the semester. The abrupt order drew outrage from students who are also juggling midterm exams, senior projects and daily classes.

Harvard student Silvana Gomez didn't know how she would afford to return on such short notice to her family's home in West New York, New Jersey. Gomez, a junior studying psychology, also worries about the risk she could pose to her father, who is 66 and has a health condition that could make him more vulnerable to the virus.

Harvard senior Nick Wyville doesn't know how he'll take online courses at his family's home near Anniston, Alabama. It's a rural area, he said, and the closest internet access is at the county's only Starbucks, miles from his home.

"We are really panicking right now, and a lot of students have anxiety," he said. "A lot of us woke up this morning to a very ominous email that's essentially evicting us from campus."

Stores were selling out of boxes near Harvard, one of several schools including Amherst College and St. John's University that asked students to move out of student housing and finish their courses for the year from home. Others, like Princeton University, are temporarily moving to online learning, even for students who remain on campus, and telling them to prepare for tight restrictions on social activities.

With more campuses canceling classes by the day, the potential impact looms large into the spring for final exams, new student tours and graduation ceremonies.

For most people, the coronavirus causes only mild or moderate symptoms, such as fever and cough. For some, especially older adults and people with existing health problems, it can cause more severe illness, including pneumonia. The vast majority of people recover from the new virus.

Dan King, president of the American Association of University Administrators, predicted "many, many more" colleges will move learning online as campuses work to contain the virus and the anxiety around it.

At Amherst College, senior Tommy Mobley said news that classes were moving online for the rest of the semester was met with disappointment and panic as students scrambled to move off campus while wondering whether they would ever return.

As professors scramble to prepare online lessons, they have a long list of concerns. Without personal contact, some wonder how they'll know if students are falling behind. Some worry students won't participate in online discussions. And there are concerns about how to offer fair exams in an online setting.

At Columbia University, Vincent Racaniello plans to teach his virology class through live video lectures that students can also watch later on YouTube. But he'll miss being able to walk around the lecture hall and look students in the eye to gauge if they're following along.

"The best part of lecturing is the contact," said Racaniello, a professor of microbiology and immunology. "I really do enjoy going and talking to the students. Afterward, they come down to ask questions. We walk to the subway together. It's all part of the educational experience, and that is hard to lose."

He expects the virus to continue spreading among students anyway.

At Fordham University, Rory Varrato said his philosophy classes, which rely heavily on classroom discussion, will likely become more like lectures as he moves to a video conference. He said he expects he'll take it easier on students when it comes to grading this term, given the unusual circumstances caused by the virus.

"My hunch is that I will be more flexible, just recognizing it's likely that some students will become ill or have an increased stress level in general," he said. "I'll definitely take all of that into consideration."

At New York University, which is moving to online classes starting on Wednesday, sophomore Mareda Michael, 19, wondered whether she would get her tuition's worth.

"We're paying so much to go to this school, to not have the school experience is a waste of money," said Michael, who was weighing whether to go home to Los Angeles, California.

At Harvard, students were told only a number of exceptions would be made for the orders to leave campus, primarily for international students who come from countries that have been hit hardest by the virus. Students were encouraged to raise any issues with housing officials or their faculty deans, said Harvard spokeswoman Rachael Dane.

"We are working individually with them to meet their needs and ensure they are supported in this transition," Dane said in a statement.

Sophomore Lucy Wickings is requesting to stay on campus during the closure but doesn't know if she will qualify. Wickings, 19, is homeless and has been saving income from three campus jobs to stay afloat over the summer. Now she fears she'll have to use her savings during the closure to cover meals and for travel to stay with a classmate's family.

"College for me is the place where I'm supposed to be getting stable housing and food," said Wickings, who is originally from Port Huron, Michigan. "I'm not really sure what to do. I figure I'll start packing today just in case."