Several parts of Colorado came under evacuation orders after high winds threatened to spread brush fires across the region.

An estimated 580 homes, a hotel and a shopping center have burned and tens of thousands of people were evacuated in wind-fueled wildfires outside Denver, officials said Thursday evening.

Brush fires broke out in several parts of Colorado on Thursday, bringing parts of the state under evacuation orders.

According to the Boulder County Sheriff’s Office, downed powerlines and blown transformers led to the small fires. And high winds are threatening to spread the embers to other areas.

Residents of two northern Colorado cities were ordered to evacuate because of wildfire. The city of Louisville, was has a population of 21,000, was evacuated after residents in Superior, which has 13,000 residents, were told to leave.

Six people who were injured in the fires were being treated at UCHealth Broomfield Hospital, spokesperson Kelli Christensen said. A nearby portion of U.S. Highway 36 also was shut down.

Colorado’s Front Range, where most of the state’s population lives, had an extremely dry and mild fall, and winter so far has continued to be mostly dry. Denver set a record for most consecutive days without snow before it got a small storm on Dec. 10. It hasn’t snowed since, though snow was expected in the region Friday.

The first fire erupted just before 10:30 a.m. and was "attacked pretty quickly and laid down later in the day and is currently being monitored" with no structures lost, Pelle said.

"This is the kind of fire we can’t fight head on," Pelle said. "We actually had deputy sheriffs and firefighters in areas that had to pull out because they just got overrun," he added.

One video captured by a bystander outside a Superior Costco store showed an apocalyptic scene with winds whipping through barren trees in the parking lot surrounded by gray skies, a hazy sun and small fires scattered across the ground.

County authorities were already concerned about high winds of up to 40 mph and gusts reaching 80 mph, which is why a ban on open burning was issued for Thursday.

The City of Louisville and the town of Superior have been evacuated. Residents of nearby neighborhoods are also scrambling for safety. 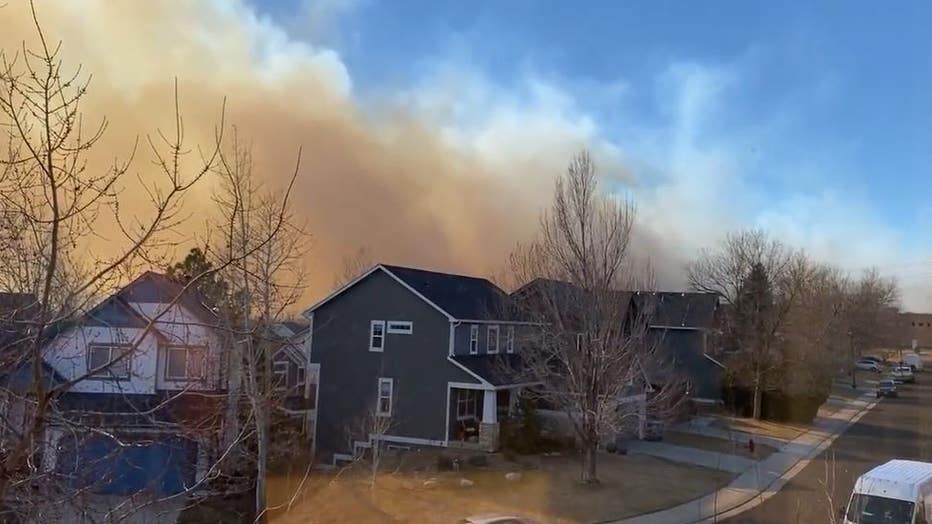 Several parts of Colorado came under evacuation orders after high winds threatened to spread brush fires across the region.(Credit: @aryann777 via Storyful

Videos shared on social media show shoppers evacuating a store only to be greeted by the sound of sirens and a smokey sky outside.

"Prayers for thousands of families evacuating from the fires in Superior and Boulder County. Fast winds are spreading flames quickly and all aircraft are grounded," Gov. Jared Polis said in a tweet.

Polis also declared a state of emergency, which will allow the state to access disaster emergency funds to support the response efforts.

The evacuations come as climate change is making weather more extreme and wildfires more frequent and destructive, scientists say. A historic drought and heat waves have made wildfires harder to fight in the U.S. West.