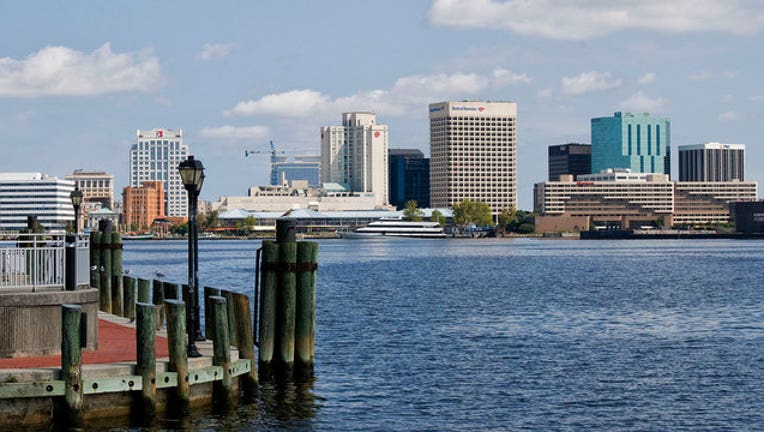 NORFOLK, Va. (AP) - The city of Norfolk, Virginia, is claiming in a lawsuit that its free speech rights are being violated because a state law won't let it remove an 80-foot (24-meter) Confederate monument from its downtown.

Norfolk's lawsuit employs a relatively novel and untested legal strategy in the federal court system for trying to remove a Confederate monument, legal experts say. The main legal question in this case is whether cities have free speech rights.

The city filed suit Monday in a U.S. District Court in Norfolk and targets a Virginia law that prevents the removal of war memorials. The suit claims infringement of the First Amendment because the city is being forced to project a message it no longer supports.

"The purpose of this suit is to unbuckle the straitjacket that the commonwealth has placed the city and the city council in," Norfolk argues in its complaint. "Because the monument is the city's speech, the city has a constitutional right to alter that speech, a right that the Commonwealth cannot take away."

Norfolk owns the monument, which includes a statue of a Confederate soldier nicknamed "Johnny Reb" as well as the seal of the former Confederacy. Council members voted in 2017 to move the monument to a cemetery.

Built in 1907, the monument was one of many erected across the southern United States between 1890 and 1919, well after the Civil War's 1865 conclusion. The Reconstruction era had ended. And an interpretation of that war that historians call the Lost Cause had emerged that romanticized the South and de-emphasized slavery.

The defendants in Norfolk's suit include the state of Virginia and state Attorney General Mark Herring.

Herring's office will review the suit and respond appropriately in court, spokeswoman Charlotte Gomer said. She added that Herring has long called for the law's repeal as well as the removal or relocation of Confederate statues.

Gomer also pointed out that Herring has written advisory opinions to help facilitate the removal of "Confederate iconography," including the removal of a Confederate flag from a city-owned historic home in Danville.

Schragger said Tuesday that there is legal precedent for the free speech rights of private corporations. But he said on the federal level, "it's not entirely clear that a city can bring a First Amendment claim against a state."

However, a similar argument was made recently in a state court in Alabama.

Various legal strategies have been employed in recent years to circumvent state laws protecting Confederate monuments. For instance, the city of Memphis, Tennessee, used a legal loophole in 2017 that involved selling city parks to a private nonprofit. It then removed confederate statues, including one of Confederate president Jefferson Davis.

But the city of Charlottesville, Virginia, is still in a long-running legal battle involving its efforts to remove statues of Stonewall Jackson and Robert E. Lee. A Virginia judge issued a pre-trial ruling in April that said the statues are war monuments protected by state law.

Charlottesville's proposed removal of the Lee statue was a focal point of a white nationalist rally in 2017 that left one woman dead and several injured after a white supremacist drove his car into a group of counter protesters.

B. Frank Earnest, heritage defense coordinator for the Virginia Division of the Sons of Confederate Veterans, warned Tuesday that Norfolk's federal lawsuit could make any war memorial vulnerable to removal.

He pointed to one that honors Gen. Douglas MacArthur that's also in downtown Norfolk.

"You can walk up to any monument and say I don't like that war monument," he said. "Japanese Americans may say they don't like World War II monuments. Think about how unpopular the Vietnam War was."