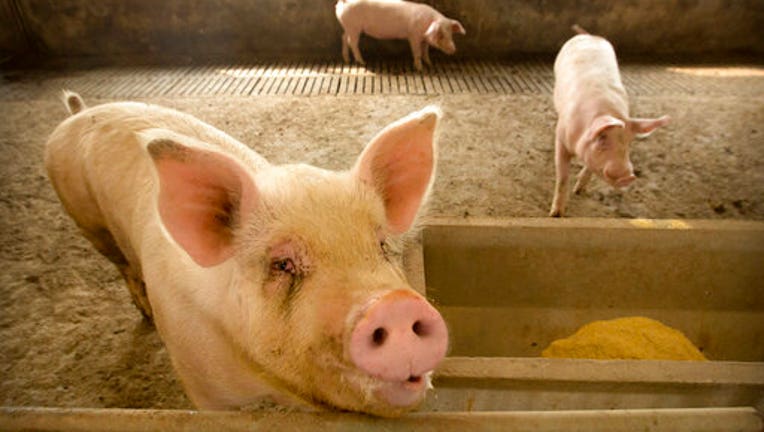 In this May 8, 2019, file photo, pigs stand in a barn at a farm in Jiangjiaqiao village in northern China's Hebei province. (AP Photo/Mark Schiefelbein, File)

NEW YORK - Chinese criminals have been intentionally spreading African swine fever to force farmers to sell their pigs for a low price before smuggling the meat and selling it on as healthy stock, state media has reported.

The disease has reduced the country’s pig herds by over 40 percent because of mass culls designed to stop it from spreading further according to the South China Morning Post.

Sometimes the gangs spread rumors about the virus, which is fatal to pigs, but in more extreme cases they are using drones to drop infected items into farms, according to an investigation by the magazine China Comment, which is affiliated to state news agency Xinhua.

One of China’s biggest animal feed producers says it has reverted to using a radio transmitter to combat the drones.

Half of the world's pigs lived in China before the epidemic began a year ago.  The latest estimates are that roughly 300 million to 350 million pigs have been lost to the disease.

The resulting shortages have seen pork prices more than double.

"One of our branches once spotted drones airdropping unknown objects into our piggery, and later inspection found [the] virus in those things," a farmer manager told China Comment.

Once they have bought the pigs, the gangs then smuggle the animals or their meat to other areas where prices are higher, despite a ban on transporting pork or livestock between provinces to control the spread of the disease.

China claims the worst of the outbreak is over and the hog population is starting to rise again.