The nursing homes that most often reported PPE shortages were for-profit, part of a chain, and had COVID-19 cases among residents and staff, according to the Associated Press.

LOS ANGELES - The U.S. Centers for Disease Control and Prevention is calling for an expansion of COVID-19 testing within the U.S. prison system after a new study suggested that correctional facilities that resisted mass coronavirus testing for inmates erred in their decision to only test inmates with symptoms, leading to large initial undercounts.

According to the study released this week, out of 16 U.S. prisons and jails across the country examined by the health agency, most of the institutions waited several days or weeks before the first identified case of COVID-19 and the beginning of mass inmate testing.

Mass testing was expensive and ate up staff time, and rearranging living space for inmates based on the results wasn't always possible, corrections officials told researchers.

Yet only testing inmates with coronavirus symptoms “likely underestimated” the number of infected prisoners, the study found. Symptom-based testing also runs the risk of inmates hiding symptoms out of fear of being removed from the regular prison population and being shunned by other inmates.

Following the researchers’ findings, the CDC said that in order to control the spread of COVID-19 within prisons and jails, there must be an expansion of testing that includes asymptomatic inmates and staff.

As of mid-August, more than 95,000 people in prisons had tested positive for the illness, a 10% increase from the week before, according to data compiled by the Marshall Project, a nonprofit news organization focusing on criminal justice, and The Associated Press.

There has also been a major drop in the number of people behind bars in the U.S. Between March and June, more than 100,000 people were released from state and federal prisons, a decrease of 8%, according to a nationwide analysis by The Marshall Project and The Associated Press. The drops range from 2% in Virginia to 22% in Connecticut. By comparison, the state and federal prison population decreased by 2.2% in all of 2019, according to a report on prison populations by the Vera Institute of Justice. 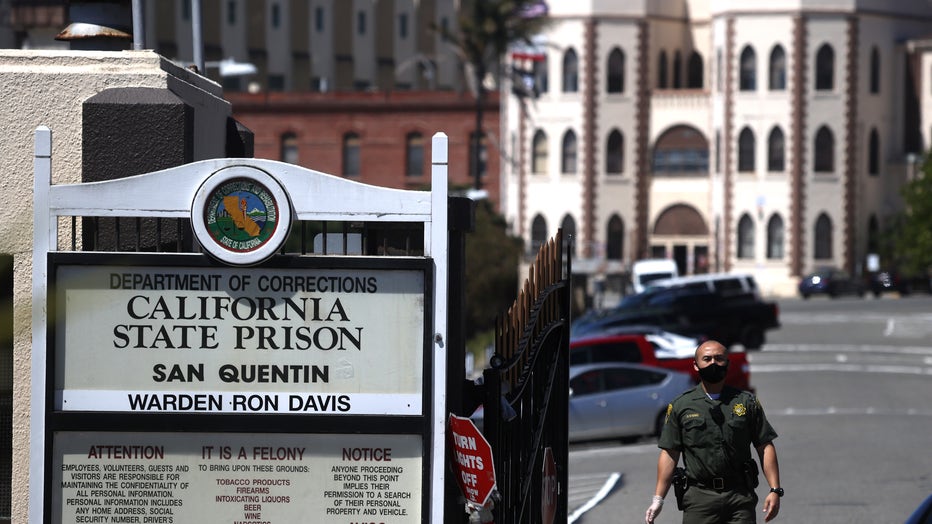 FILE - A California Department of Corrections and Rehabilitation (CDCR) officer wears a protective mask as he stands guard at the front gate of San Quentin State Prison on June 29, 2020 in San Quentin, California. (Photo by Justin Sullivan/Getty Images)

But this year’s decrease has not come because of efforts to release vulnerable prisoners for health reasons and to manage the spread of the virus raging in prisons, according to detailed data from eight states compiled by The Marshall Project and AP.

Instead, head counts have dropped largely because prisons stopped accepting new prisoners from county jails to avoid importing the virus, court closures meant fewer people were receiving sentences and parole officers sent fewer people back inside for low-level violations, according to data and experts. So, the number could rise again once those wheels begin moving despite the virus.