WASHINGTON - A bipartisan Senate report released last week details security failures surrounding the Jan. 6 insurrection at the Capitol and recommends how to fix them. But it has only added to the unanswered questions about the attack, when hundreds of former President Donald Trump’s supporters broke through windows and doors and interrupted the certification of President Joe Biden’s win.

The report, which detailed broad failures across government and law enforcement, was narrowly focused and did not examine the broader motivations of the rioters or Trump’s role as he spread lies about his election defeat. The joint investigation by two Senate committees was finished quickly to ensure that the necessary security improvements could be made, and some government agencies didn't fully cooperate.

The scope of the report was also narrowed to win the support of Republicans, most of whom have signaled they have little interest in revisiting the political motivations of the rioters.

Democrats, and some Republicans, believe that a bipartisan, independent commission is still needed. But Republicans in the Senate blocked legislation that would have created a panel similar to the one that probed the Sept. 11 terrorist attacks 20 years ago, saying another review would be redundant, partisan and unnecessary.

House Speaker Nancy Pelosi has said that if the Senate does not act on the commission, she will move to set up investigations in the House instead. 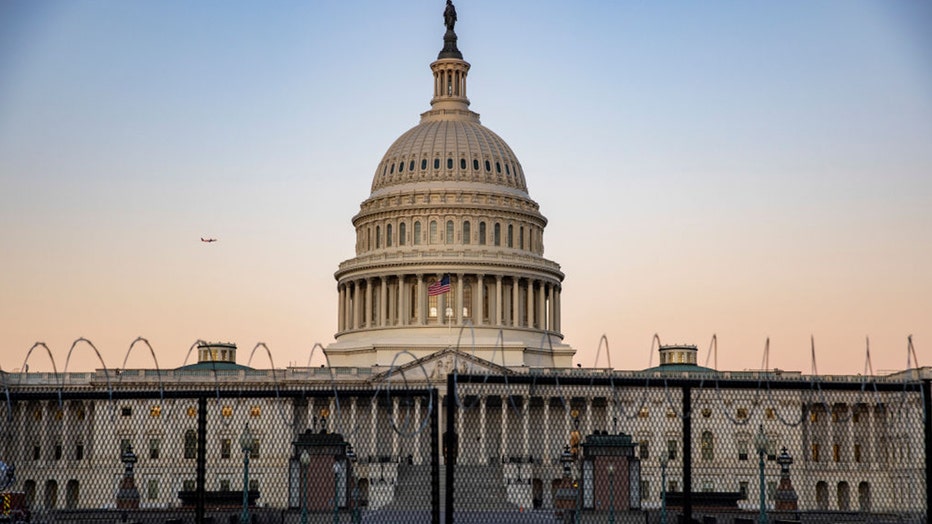 FILE - The US Capital is seen as National Guard and US Capitol Police stand guard on Feb. 08, 2021 in Washington, DC.

Democratic Sen. Gary Peters, chair of the Senate Homeland and Governmental Affairs Committee and one of the authors of the Senate report, says that Jan. 6 was an awakening for the country on domestic terrorism in the way that 9/11 was an awakening on international terrorism. A commission would be able to do "a much broader analysis, looking at the bigger picture," Peters said.

A look at what questions remain:

HOW DID INTELLIGENCE FAIL?

The Senate report found intelligence failures across many areas of government. The Capitol Police and other agencies had information in the weeks before the insurrection that Trump supporters were openly planning to stop the certification of Biden’s victory. But there was a breakdown in sharing and communications, and senior leaders never saw most of the intelligence.

The two Senate committees that conducted the investigation, the Homeland panel and the Senate Rules Committee, said that the FBI and the Department of Homeland Security did not fully comply with their probe. So the extent of those agencies’ role in the missed intelligence is still unclear.

Lawmakers say they want to know why so many agencies failed to predict the attack, even though it was planned in plain sight on social media and the internet. The Senate report said that in many cases, intelligence agencies decided that the internet posts weren’t credible.

"To me, that’s very, very problematic," Peters said. "We need to have a better understanding of that and ask questions as to why did you think that the statements you were seeing on social media about individuals’ intent to come to the Capitol to engage in violence, why didn’t you think that was credible? Was it something about who the people were that made it not credible?"

HOW DID EXTREMIST GROUPS PLAY A PART?

Democrats have also said they want to know more about the organization and motivation of some of the far-right groups that mobilized at the Capitol in support of Trump. While the Justice Department has made more than 400 arrests in their own criminal investigation, their probes may be limited to what can be prosecuted and proved as a crime.

More than three dozen members and associates of the far-right groups the Proud Boys and the Oath Keepers have been charged. Beyond the criminal charges, though, a commission could look at the broader influences of those groups, how they were formed and what they might have planned next. Lawmakers have also asked questions about their financing and about whether anyone helped pay for their actions in Washington.

WHAT WAS TRUMP’S ROLE?

The most obvious question that hasn’t been explored is what role Trump played and what he said and did during the attack. The House impeached Trump for inciting the insurrection when he told his supporters at a rally beforehand to "fight like hell" to overturn his defeat, but the Senate acquitted him. Senate Republicans again made clear that they don’t want Trump investigated when they blocked the commission.

But members of both parties have still repeatedly raised questions about his actions. According to an account shared by another House Republican, Trump spoke with House Republican leader Kevin McCarthy and defended the rioters as they were breaking into the building. Republican Sen. Ben Sasse of Nebraska told a radio host that he was told Trump was "delighted" as the riot was unfolding.

More broadly, a commission would likely look into the influence of Trump’s false claims about the election. He has repeatedly said that it was stolen even though that claim has been refuted on a bipartisan basis by election officials, courts across the country and even his own attorney general. The claims were repeated by the rioters as they broke in, and some of them have used his words in court as a defense for their actions.

WAS THERE INSIDE COORDINATION?

Some Democrats, including Pelosi, have suggested that Republican lawmakers may have known in advance that some of Trump’s supporters were planning violence. Pelosi has said that if members of Congress were "accomplices" to the insurrection, they would have to be prosecuted.

There is no evidence of such coordination, which Republicans have strongly denied.

WHAT LED TO SEVEN DEATHS?

Seven people died during and after the riots, including three Trump supporters who had medical emergencies and a fourth Trump supporter who was shot and killed as she attempted to break into the House chamber. A Capitol Police officer, Brian Sicknick, collapsed and died after engaging with the rioters, but was ruled to have died of natural causes. Two police officers who were there died by suicide in the days that followed.

Questions have swirled around most of the deaths, including from family members who want to know more about what happened. Sicknick’s mother and partner visited the offices of Senate Republicans just before the vote on the commission, questioning how anyone wouldn’t want to know more.

"I suggest that all Congressmen and Senators who are against this Bill visit my son’s grave in Arlington National Cemetery and, while there, think about what their hurtful decisions will do to those officers who will be there for them going forward," Gladys Sicknick said in a statement. "Putting politics aside, wouldn’t they want to know the truth of what happened on January 6?"