From 'Lectern Guy' to a Clearwater man who has received the longest sentence so far, most of those facing charges from the Capitol Riot are from Florida.

TAMPA, Fla. - It's been exactly one year since supporters of former President Donald Trump stormed the Capitol hours after his speech criticizing the election results. Multiple people died and four Capitol officers took their own lives in the days and months after the attack.

Since then, over 700 people have been charged – and most of them are from Florida. The FBI reports 73 people were arrested in Florida, followed by 67 defendants in Texas and 62 in Pennsylvania. Some have already been sentenced while others are still waiting to learn their fate. An ongoing list can be found on the Department of Justice website.

Several high-profile cases occurred in Florida. Of the more than 70 defendants facing charges, 20 are from the Tampa Bay region.

The first defendant to plead guilty was Paul Hodgkins of Tampa. He was sentenced to eight months in prison and the judge allowed him to self-surrender in early September. But after, Hodgkins wanted to take back his guilty plea. He got a new attorney and filed an appeal.

The Tampa man who was the first defendant to plead guilty for his involvement in the Capitol riot of January 6 appears to have a change of heart.

Then, weeks later, Hodgkins filed a new extension in mid-September, asking to push his turn-in date to January. A judge reviewed the motion and rejected Hodgkins' request. In October, his attorney confirmed Hodgkins turned himself in and is now in federal prison in Miami.

Jeremy Brown, a former Green Beret and one-time candidate for Congress, is still being held in Pinellas County Jail. His supporters call Brown a "political prisoner" and have planned a rally for him outside the jail for Thursday evening.

Last year, he showed up at the Capitol Riot in full combat gear. Prosecutors said that days before the riot, Brown instructed others he planned to travel with to pack weapons and be "ready to go."

He later told FBI agents he was providing security for VIPs at the 'Stop the Steal" rally. However, prosecutors say the evidence shows something else. During a search at his Tampa home, investigators found several unregistered high-powered weapons.Brown was also a one-time candidate for Congress.

Federal prosecutors say Tampa resident Jeremy Brown breached the Capitol building on January 6. The former Army Green Beret and one-time candidate for Congress was arrested on September 30 and is now behind bars.

Last month, Largo resident Robert Palmer received the longest sentence of any of the 700 rioters charged so far: more than five years in federal prison for spraying police officers with a fire extinguisher and then throwing the canister at them.

The 54-year-old wore an American flag jacket that said "Florida for Trump" to the Capitol. He made more national headlines when he spoke to reporters from Huffington Post, denying doing anything wrong that day and blaming the Biden administration for going after "patriots" like him. Palmer later started a donation website to help with his defense, calling himself a "proud American patriot who went to DC to support our president and to witness the overturn of the election."

But 11 months later, his attorney said he had a change of heart, telling a judge his client is "remorseful" for his actions. 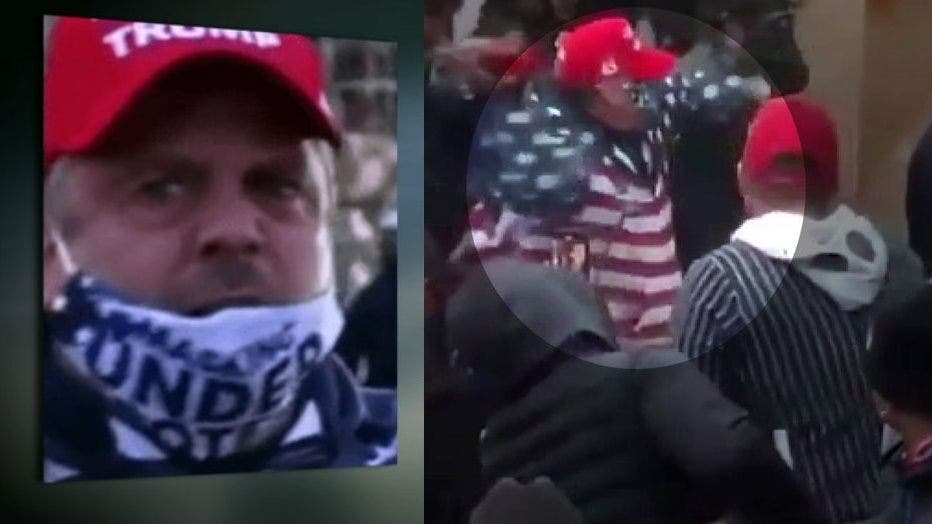 Adam Johnson is the Parrish seen in a now-infamous picture of him walking around with House Speaker Nancy Pelosi's lectern, posing with it. He was arrested just a couple of days after the insurrection. A federal judge called his behavior "clownish" and scolded Johnson, saying weak-minded enough to "follow a lie and do what you did." 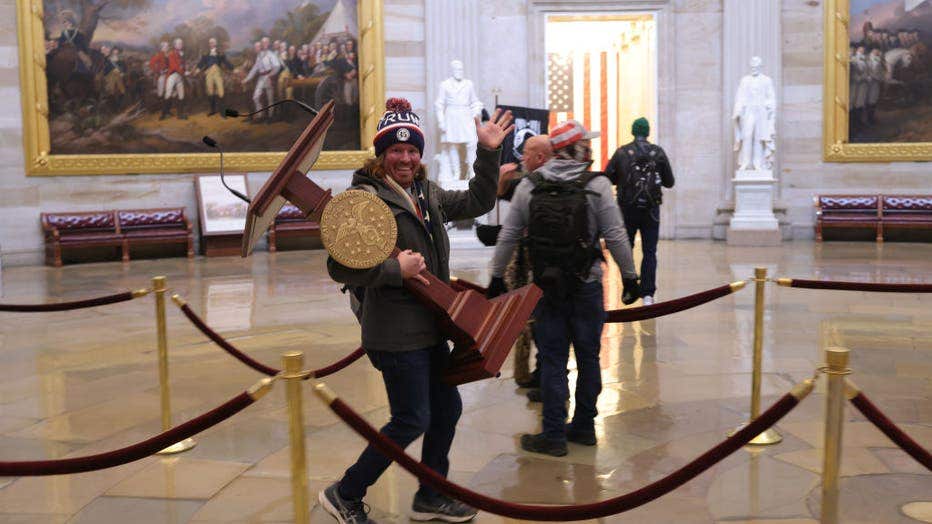 Johnson cut a deal with prosecutors, pleading guilty to entering and remaining in a restricted building. The rest of the charges against him were dropped. As part of his plea agreement, Johnson is facing up to six months in prison and a $500 fine. His sentencing is set for February.

A group of Polk County residents is also in legal trouble. Jonathan Pollock and his sister Olivia, Joseph Hutchinson III, Joshua Doolin, and Michael Perkins all face charges. They're accused of attacking Capitol police and breaching the Capitol fencing; Jonathan Pollock is still wanted by the FBI. 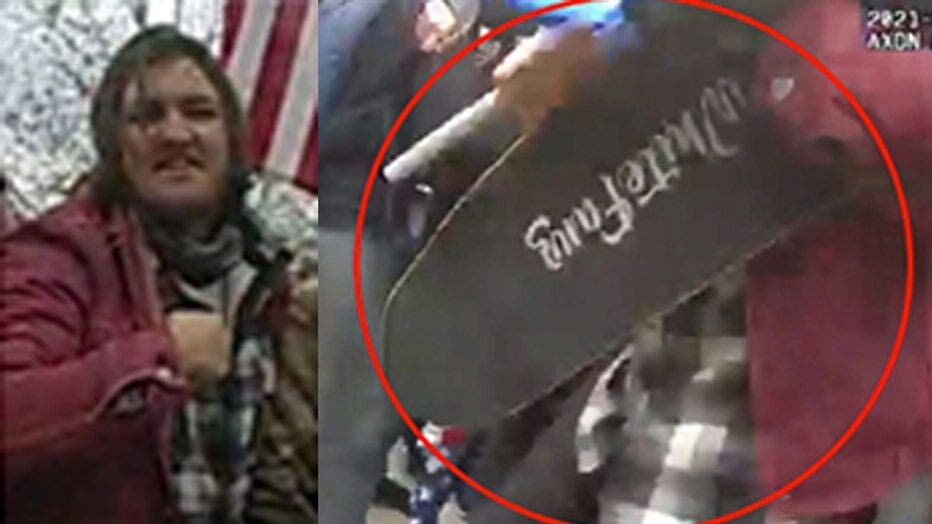 Elsewhere in Florida, Grady Owens, a Full Sail University student living in Winter Park, was arrested after federal investigators say he struck an officer with a skateboard during the riot. A staff member at the school was actually the person who identified Owens in a video from the riot, investigators said. People familiar with Owens told FOX 35 that his actions are completely out of character for the 21-year-old.

Kenneth Reda, a former teacher at a Brevard County high school, pleaded guilty and will be sentenced next month. FBI documents show he used the social media app, Parler, discussing his trip to D.C., saying, "I was there at the steps of the capital. I got into the Capitol building. There was certainly a difference in attitude by some a small number mind you than the rest of us more violent and speaking poorly to the police."

In the year since the January 6 insurrection, elections officials in Tampa Bay spent time answering questions from residents and correcting any misleading or wrong information about what happens at the polls.

President Joe Biden on Thursday delivered what he declared was the "God's truth" marking the first anniversary of the U.S. Capitol insurrection, the violent attack by Donald Trump's supporters that has fundamentally changed Congress and raised global concerns about the future of American democracy.

Trump previously scheduled a press conference from Mar-a-Lago but announced this week it was canceled. Instead, he says he will discuss his grievances at a rally he has planned in Arizona later this month.

Trump had been expected to use the press conference to rail against the congressional committee investigating the events of Jan. 6, when a mob of his supporters violently stormed the Capitol in an effort to halt the transfer of power, and to repeat his lies about the 2020 election. The event would have been Trump’s second press conference since leaving office.

A main motivator behind the siege was a false belief that the 2020 election had been stolen. That event sparked more attention on election integrity. Some states, including Florida, passed stricter voting laws. Election officials in the Bay Area have been trying to correct misinformation about what happens at the polls.

Supervisors in Hillsborough and Pinellas counties say they've been talking to residents about how voting machines work. They've also been touching on audits, voter registration, and cybersecurity, explaining how all of it helps protect the integrity of elections.

"One of the great things that has happened since the 2020 election is we've seen more people interested in the election process, which has given us the opportunity to explain some of the nuances of Florida's laws, the technology involved, and giving us an opportunity to have conversations we might not have. So we have had a lot of people bring to us misinformation, disinformation, mal-information. When possible, we've taken the opportunity to correct the record and prove to people the machines have been counting the ballots as they're supposed to, pursuant to Florida law, and that there is a process in place to ensure the integrity of elections."

Elections officials said outreach and education for residents is not new to them, but the 2020 election shows why it’s important. Hillsborough County Supervisor of Elections Craig Latimer explains.

PREVIOUS: Another resident of The Villages accused of voter fraud

"Unfortunately, there's still a lot of myths out there. You know, I read them every day, hear about them every day of people that just think that things are haywire and they're not," said Latimer. "And I think that once we start educating people and they realize that they have more confidence in the system. So it is a battle right now, there's no doubt about it."

The Hillsborough County Supervisor of Elections said his office plans to release a series of videos in the next two weeks talking about the ins and out of elections, security and how it all works. They want to make sure people know what’s happening ahead of the midterms this year.