Taxi driver saves elderly woman from being scammed out of $25,000

Raj Singh, a California taxi driver, saved a 92-year-old woman from being scammed of $25,000, according to police.

ROSEVILLE, Calif. - A California taxi driver saved a 92-year-old woman from being scammed out of $25,000, police said in a Facebook post last Tuesday, adding that he deserves a “great citizen award.”

Raj Singh, who owns Roseville Cab, picked up the elderly woman from her home in Sun City, Calif. From there, he started to drive her to the bank, the Roseville Police Department said on Facebook.

“While in route, he started talking with the woman who informed Raj that she owed the IRS $25,000 and she was headed to the bank to get the money and send it off to settle her debt,” the police department said.

The circumstance sounded “very suspicious” to Singh, so he suggested to the woman that it could be scam, police said.

At first, the woman didn’t believe him. According to the police department, Singh “pleaded with the woman to reconsider so they agreed to stop by the Roseville Police Station to ask an officer.”

“Sure enough, it was a scam,” the department wrote on Facebook. 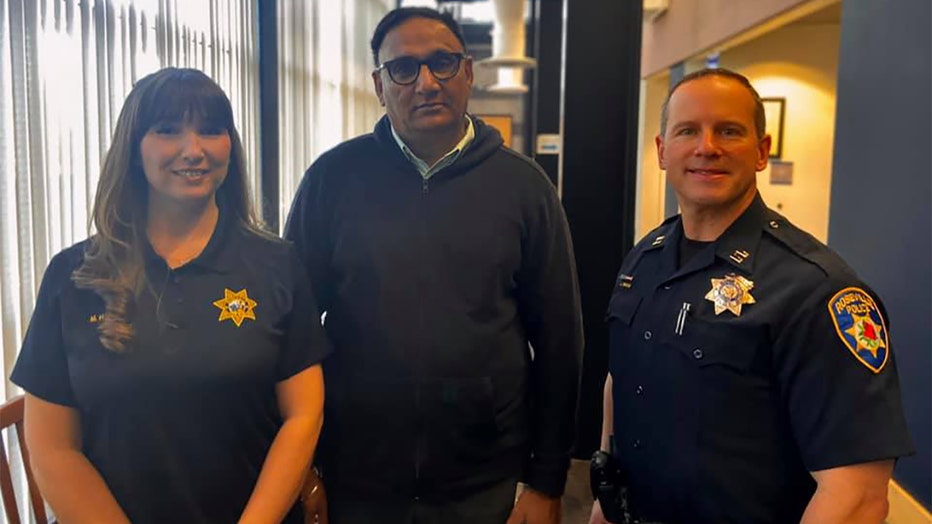 Raj Singh (C), a California taxi driver, saved a 92-year-old woman from being scammed of $25,000, according to police. (Photo: Roseville Police Department)

After speaking to the officer, the woman believed she was being scammed and decided not to pay the suspected scammers. Singh then drove the woman back home.

“We love this story because several times throughout, Raj could have just taken his customer to her stop and not worried about her wellbeing,” the police department wrote. “He took time from his day and had the great forethought to bring the almost-victim to the police station for an official response.”

“For that, we greatly appreciate his efforts,” the department said.

The police department partnered with Roseville Crime Stoppers to provide Singh a $50 gift card as a thank you.