Huntington Beach has reopened its shoreline, just over a week after a massive oil spill. 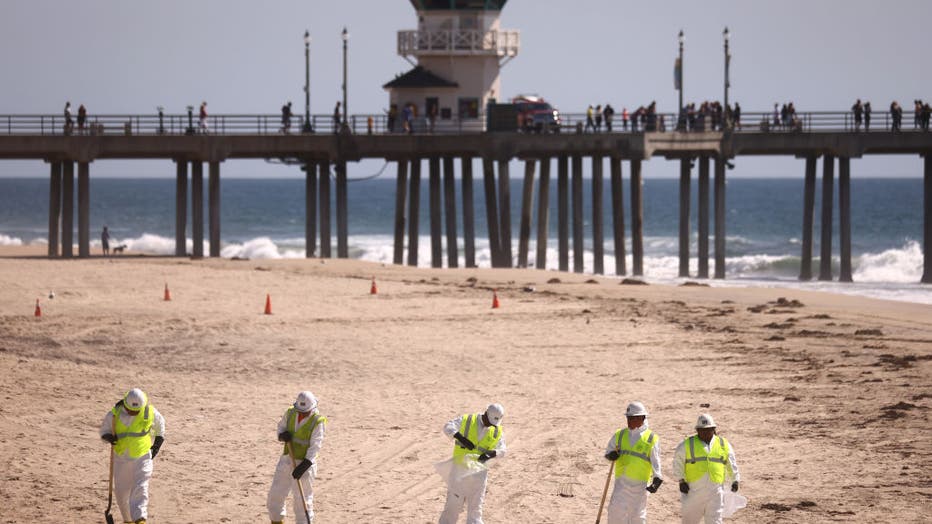 "The health and safety of our residents and visitors is of the utmost importance. We understand the significance our beaches have on tourism, our economy and our overall livelihood here in Huntington Beach," said Huntington Beach Mayor Kim Carr. "It is important that our decision to reopen our shoreline and water be based on data and that we continue to monitor the water quality going forward."

Officials continued to warn the public not to handle any tar balls they may encounter on the sand. Oil contains hazardous chemicals, and beachgoers who encounter tar balls were encouraged to email tarballreports@wildlife.ca.gov. If skin contact occurs, they are advised to wash the area with soap and water or baby oil and avoid using solvents, gasoline, kerosene, diesel fuel, or similar products on the skin. Officials say these products, when applied to skin, present a greater health hazard than the tarball itself.

The city of Huntington Beach and California State Parks announced that they will reopen city and state beaches on the morning of Oct. 11.

According to data provided Sunday afternoon by the Unified Command handling the cleanup effort:

-- To date, 5,544 total gallons of crude oil have been recovered by vessel.

-- Approximately 250,000 pounds of oily debris has been recovered from shorelines.

-- Two overflights were scheduled for Sunday.

-- 11,400 feet of containment boom have been strategically deployed.

The Unified Command is headed by the U.S. Coast Guard and also includes officials from Orange County, San Diego County, the California Department of Fish and Wildlife and Amplify Energy Corp. -- owner of the damaged pipeline that leaked the oil.

Meanwhile, the Oiled Wildlife Care Network reported that its responders had recovered 58 species impacted by the spill as of Sunday, 50 birds and eight fish. Twenty-six of the birds were recovered alive, but all eight of the fish were dead.

The organization was doing an extensive recovery from Long Beach Harbor to Oceanside, field stabilization at the Wetlands and Wildlife Care Center in Huntington Beach, and primary care at the Los Angeles Oiled Bird Care and Education Center -- home to International Bird Rescue.

"Absolutely amazing, and makes me so proud of all we have collectively developed to respond quickly and in a coordinated fashion anywhere oil may be oiled." OWCN Director Michael Ziccardi said.

Officials said no oiled wildlife has been located in San Diego County. For the latest wildlife information, you can visit the UC Davis Veterinary Medicine website.

The leak was reported on the morning of Oct. 2 a few miles off the Huntington Beach coast, although some boaters reported smelling something in the water Friday.

Authorities initially estimated that as much as 144,000 gallons of oil may have leaked from the damaged pipeline, but officials said Thursday the actual amount is likely much lower, although there is still no firm number. At a news conference Thursday afternoon, USCG Capt. Rebecca Ore estimated that roughly 588 barrels of oil had spilled, which would equate to about 24,700 gallons. That's being considered a minimum amount leaked, but officials were unsure of a possible maximum number.

Crews responded to the leak last Saturday morning, and beaches were quickly closed as authorities realized the size and scope of the oil slick.

Amplify CEO Martyn Willsher insisted the company was unaware of any release of oil into the ocean until about 8 a.m. Saturday, adding that the firm responded and reported the incident immediately.

The U.S. Department of Transportation's Pipeline and Hazardous Materials Safety Administration's Office of Pipeline Safety issued a corrective action order Tuesday, saying workers in the company's control room "received a low-pressure alarm on the San Pedro Bay Pipeline, indicating a possible failure at about 2:30 a.m. Saturday," but the pipeline carrying crude oil was not shut down until about 6 a.m. Saturday.

Asked repeatedly about that timeline during a Wednesday media briefing in Huntington Beach, Willsher only said the company was cooperating fully with federal and local investigators

"We are working with them, giving them all the transparency and information that we have," Willsher said.

As for whether there was an alarm that alerted crews to a pressure drop, he said. "We are conducting a full investigation of that ... to see if there was anything that should have been noticed."

Willsher said his company was also unaware of any reports of a sighting of oil in the water as early as 6 p.m. Friday.

Meanwhile, the Coast Guard's lead investigator said Friday the ruptured underwater pipeline might have been damaged several months to a year ago, adding that it's unclear when the crack occurred or when oil began seeping into the water.

The revelation marks a major change in the investigation into the cause of the leak.

Capt. Jason Neubauer told reporters Friday that underwater video of the damaged pipeline shows "marine growth" around the 13-inch crack in the pipeline that was left exposed when its concrete casing was ripped away, likely by the strike of a ship's anchor that hooked the line and dragged it 105 feet out of place.

Huntington Beach has reopened its shoreline, just over a week after a massive oil spill.

Investigators were analyzing the maturity of the vegetation to give them a clue as to when the pipeline was initially struck and lost its protective concrete casing.

The presence of the marine vegetation on the exposed pipe "has refocused the ... timeframe of our investigation to at least several months to a year ago," Neubauer said.

He said a routine inspection of the pipeline conducted by Amplify Energy in October of last year showed no damage. Investigators were also looking into the possibility that a winter storm Jan. 24-25 may have contributed to the positioning of ships' anchors in the area.

Also unclear is exactly when the crack in the pipeline occurred. Neubauer said the pipe may not have ruptured when it was originally pulled out of place and stripped of its concrete casing. Or a small crack may have occurred that gradually got bigger over time, leading to the 13-inch fissure now present in the pipe.

Neubauer also said the pipeline may have been struck multiple times over the past year, and investigators were also examining whether recent earthquakes may have contributed to the damage.

Divers contracted to investigate the source of the leak confirmed that a 4,000-foot section of the 17.7-mile pipeline was moved out of place by as much as 105 feet, and a 13-inch "split" in the line was detected in the displaced section 4 1/2 miles offshore.

Willsher said the pipeline is a 16-inch steel pipe covered in concrete, indicating it would take a great deal of force to move and rupture it. He said the pipeline was "pulled like a bowstring," lending credence to the possibility of a ship's anchor catching and dragging the line.

The National Transportation Safety Board will also conduct an investigation that will be coordinated with the Coast Guard to avoid redundancies, said Andrew Ehlers, the chief investigator for the probe.

The spill occurred in federal waters at the Elly oil-rig platform, built to process crude oil from two other platforms, which draw from a large reservoir called Beta Field. Elly is one of three platforms operated by Beta Operating Co., which is owned by Amplify Energy and also operates Ellen and Eureka nearby. Elly processes oil production from Ellen and Eureka and is fed by some 70 oil wells. The processing platform separates oil from water.

Elly is one of 23 oil and gas platforms installed in federal waters off the Southern California coast, according to the Interior Department's Bureau of Ocean Energy Management. Besides Elly, a processing facility, there are 20 others that produce oil and gas, and two are being decommissioned.

Rep. Mike Levin, D-Dana Point, and Rep. Alan Lowenthal, D-Long Beach, on Friday led a letter signed by 77 other congressional representatives urging House Speaker Nancy Pelosi and Majority Leader Steny Hoyer to make sure the Build Back Better Act continues to retain a ban on any new federal oil and gas leasing off the Pacific and Atlantic coasts and in the Eastern Gulf of Mexico.

Levin is also behind the American Coasts and Oceans Protection Act that would bar any new leasing for oil drilling along the Southern California Coast from San Diego to San Luis Obispo County.