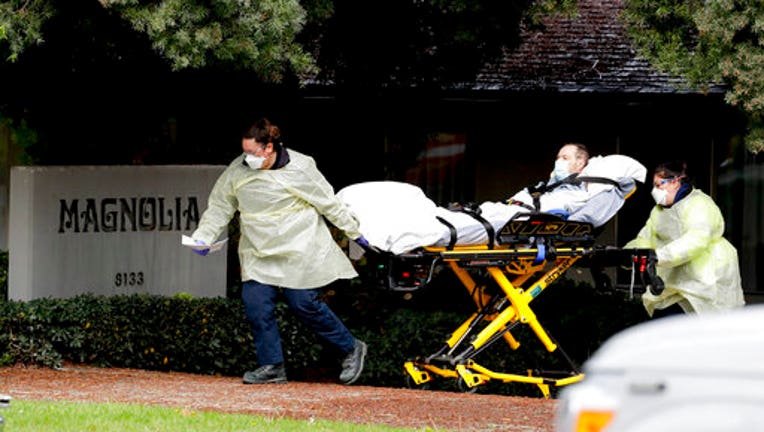 A patient is evacuated from the Magnolia Rehabilitation and Nursing Center in Riverside, Calif., Wednesday, April 8, 2020. (AP Photo/Chris Carlson)

RIVERSIDE, Calif. - A skilled nursing facility in Southern California where nearly three dozen residents are infected with the coronavirus was being evacuated after staff members failed to show up to care for them, officials said Wednesday.

Riverside County public health officials said 84 patients were being moved from the Magnolia Rehabilitation and Nursing Center in Riverside after employees didn't show up two days in a row.

One of 13 certified nursing assistants showed up to work, the health officials said, which prompted the county to send in nurses.

The county doesn't know why the employees didn't report to work, said Brooke Federico, a spokeswoman for the county’s public health agency. No one at the facility could be immediately reached for comment.

Five employees and 34 residents at the 90-bed facility have been found to have the virus, officials said.

It wasn't immediately clear which facilities would receive the evacuated residents. Some may be well enough to be sent home, Federico said.

All facilities that accept patients from the center will need to follow containment measures, including no new admissions and isolating patients with the virus.

Outbreaks at nursing homes and elder residences have alarmed experts. The situation is challenging for health officials due to the age and condition of the residents and their close proximity to each other.

For most people, the coronavirus causes mild or moderate symptoms, such as fever and cough, that clear up in two to three weeks. For some, especially older adults and people with existing health problems, it can cause more severe illness, including pneumonia and death.

At a facility in the San Francisco Bay Area, nearly 50 people have been infected and one person has died. An outbreak at a skilled nursing facility in San Bernardino County infected more than 50 people, killing at least five.