INDIANAPOLIS, Ind. - Five weeks have passed, but it still seems a bit unreal.

The Georgia Bulldogs straggling off the field in Atlanta, having been beaten by an Alabama offense that showed absolutely no respect for what was supposedly one of the greatest defenses in college football history.

GEORGIANS ENCOURAGED TO WEAR RED AND BLACK FOR ‘HUNKER DOWN DAY’

The sting of that day hasn’t gone away.

"It was our wake-up call," said Jordan Davis, Georgia’s behemoth of a defensive lineman. "We realized that we had a lot of work to do and we hadn’t arrived yet."

The Bulldogs (13-1) bounced back with a dominant victory over Michigan in the Orange Bowl semifinal, but the real test comes Monday night in the national championship game.

Before they were Bulldogs

A handful of big names for Georgia football once were big names on the high school gridiron. A look at some of the High 5 Sports athletes who are now Bulldogs.

GEORGIA VS ALABAMA NATIONAL CHAMPIONSHIP GAME: WHAT YOU NEED TO KNOW

They’ll get another shot at Alabama, the team that left them huffing and puffing in a 41-24 beatdown for the Southeastern Conference title.

Over 12 regular-season games, Georgia’s defense was barely tested. The Bulldogs posted three shutouts and allowed just 83 points — a minuscule 6.9 per game and by far the best in the country.

They went into the SEC title game with all sorts of swagger, even though they were facing the defending national champs, a team they haven’t beaten since 2007.

LOOK BACK AT HISTORIC MATCHUPS IN THE GEORGIA-ALABAMA FOOTBALL RIVALRY 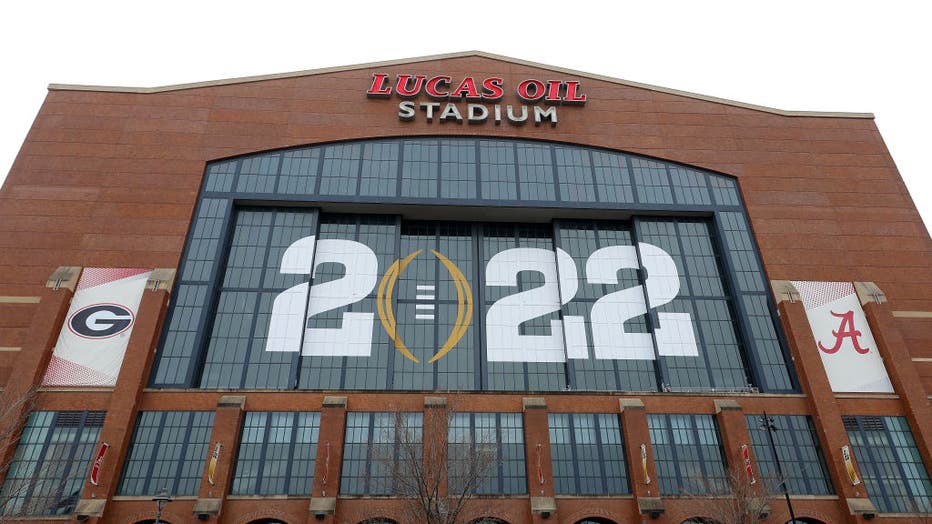 INDIANAPOLIS, INDIANA - JANUARY 09: A view of Lucas Oil Stadium ahead of the 2022 CFP National Championship between the Alabama Crimson Tide and the Georgia Bulldogs on January 09, 2022 in Indianapolis, Indiana. (Photo by Kevin C. Cox/Getty Images)

Four dizzying quarters later, that aura of invincibility was gone.

Heisman Trophy winner Bryce Young ducked and dodged any attempts to get pressure on the quarterback. His scrambling left Davis and the Bulldogs huffing and puffing, creating plenty of time to hit one deep pass after another.

Young threw for 421 yards and three touchdowns. He ran for 40 yards and another score. The Bulldogs had no answer for a QB they’ve since dubbed the Gingerbread Man for his elusiveness.

After totaling 41 sacks during the regular season, Georgia didn’t have any against the Crimson Tide (13-1).

Georgia’s defense is looking to build on its thoroughly dominant performance in the Orange Bowl, where they kept Michigan out of the end zone until the closing minutes.

The parents of Georgia football's Travon Walker discusses the journey from picking UGA to playing in the College Football Championship.

But Young and the Tide are an entirely different challenge. The Bulldogs must find a way to create some havoc in the pocket, even if they aren’t able to bring Young down. He had far too much time in the first game to survey the field, allowing him to burn Georgia over and over again with deep throws.

"We’ve faced pretty elusive guys," linebacker Nakobe Dean said. "I feel that he’s one of the best ones as far as sitting in that pocket and staying calm. I feel like he does that better than anybody."

BEFORE THEY WERE BULLDOGS, THEY WERE HIGH 5 STARS

Alabama largely abandoned the running game against the Bulldogs, only to bring it back in a big way in a 27-6 smacking of Cincinnati in the Cotton Bowl semifinal.

The Tide rushed for 301 yards against the Bearcats, their best of the season by a long shot. Brian Robinson led the way with a career-high 204 yards on the ground.

"That’s the ultimate challenge," Smart said Sunday. "It’s a double-edged sword. You do too much of this, they can hurt you. They’re certainly physical up front. They always have been.

"But," he quickly added, "make no mistake about it, they can be really explosive on the outside."

Even though Alabama won’t have one of their top receivers — John Metchie went down with a season-ending knee injury in the first meeting against Georgia — Young still has plenty of weapons to work with.

"You can actually win the line of scrimmage and you could possibly lose the game because of explosive plays," Smart said. "That’s what you’ve got to be careful of."