The father of a missing Buffalo State College student says he is living a nightmare. Saniyya Dennis, 19, a sophomore from the Bronx, was last seen on campus on April 24. She apparently boarded a bus to Niagara Falls.

BUFFALO, N.Y. - Police are looking for a Buffalo State College student who has been missing since late last month.

Saniyya Dennis, 19, a sophomore from the Bronx, was seen leaving her on-campus residence hall around 11 p.m. on Saturday, April 24, according to the University Police Department. Investigators are concerned that she may need medical attention.

Dennis's father, Calvin Byrd, told FOX 5 NY the family feels as though they're receiving very little help from police in the area.

"This is a nightmare. I never thought I'd go through this," Byrd said. "They trusted the University Police with a matter like this. Picture that — your kid is missing, we're asking, 'Call the police' and they are telling us, 'We are the police.'"

Chief of University Police Peter Carey said in a statement that he and his department "will not rest" until they find Dennis.

"Our one and only goal in this investigation is to locate Saniyya and reconnect her with her family," Carey said. "Understandably, emotions are high right now, but I want to be clear that our department will not rest until Saniyya is found."

Police said Dennis may have traveled to Yonkers but could also still be in the Buffalo area. Her phone last pinged from Niagara Falls State Park, about 20 minutes from campus, according to a report by WGRZ.

"What if she's in the park and needs medical attention?" Byrd said. "It's been nine days."

"She got off a bus to Niagara Falls and we are trying to find out, who did she meet? What were her intentions?" he said.

Byrd says most of the cameras that might help them in the park are not operational. And in town, it is more of the same.

Volunteers went to the park over the weekend to search and put up posters. And police have searched the park and the Niagara Falls area every day, authorities said. 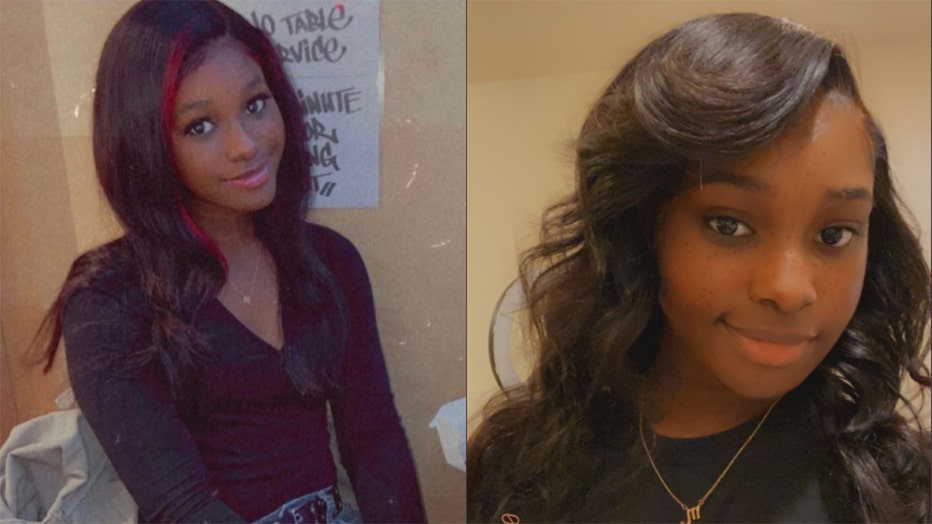 Saniyya Dennis, 19, a student at Buffalo State College, has been missing since Saturday, April 24, 2021. (Family photos via University Police Department)

The New York State Park Police told FOX 5 NY that it is one of several agencies — including one on the Canadian side of Niagara Falls — assisting with the investigation, which has included repeated searches of Niagara Falls State Park and Niagara River Lower Gorge.

In a statement, the president of the college assured the college community that campus police and other law enforcement agencies are doing what they can to find Dennis.

"In particular, we thank the New York State Park Police and the countless community volunteers who have assisted in the search by posting fliers or sharing Saniyya's photos on social media," Katherine Conway-Turner said. "[We] recognize that there is great interest in the details of this case, but please understand that in order to protect the integrity of this multiagency investigation, we are unable to publicly disclose certain aspects of the case."

She is a straight-A student, Byrd said. Her family has put up a reward of $10,000 for information leading to her. Byrd is asking people to reach out to him on social media with tips on his daughter's whereabouts. You can find him on Instagram @its40cal.

Anyone with information can contact Buffalo State's police at either 716-878-6333 or police@buffalostate.edu.

Buffalo State is posting regular updates on its Facebook page. 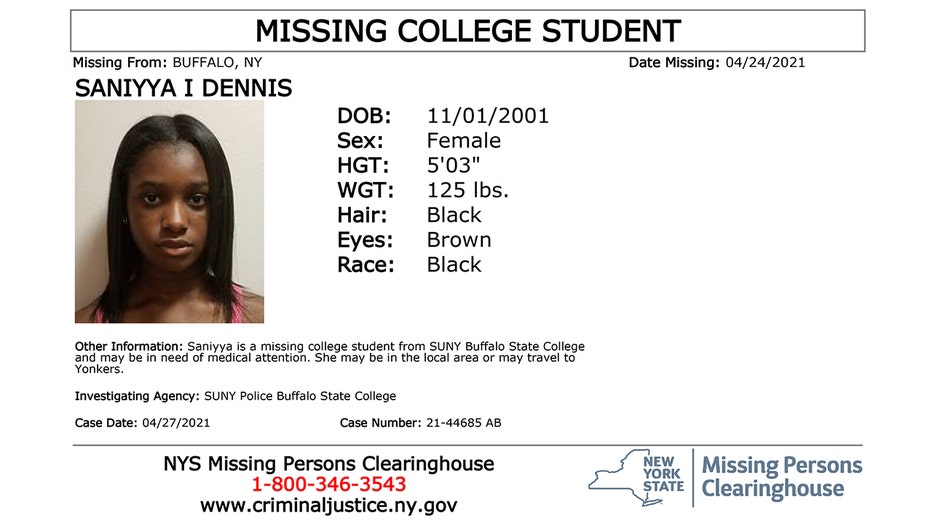 A poster about Saniyya Dennis, 19, a student at Buffalo State College, has been missing since Saturday, April 24, 2021. (NYS Division of Criminal Justice Services)