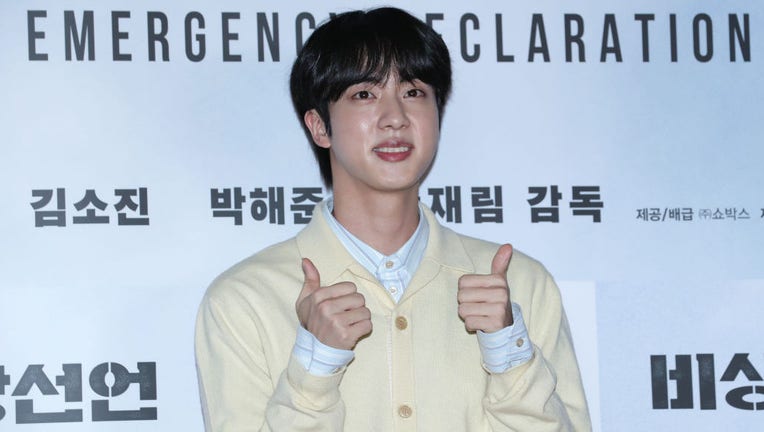 YEONCHEON, South Korea - Jin, the oldest member of K-pop supergroup BTS, began his 18 months of mandatory military service at a front-line South Korean boot camp Tuesday as fans gathered near the base to say goodbye to their star.

Six other younger BTS members are to join the military in coming years one after another, meaning that the world's biggest boy band must take a hiatus, likely for a few years. Their enlistments have prompted a fierce domestic debate over whether it’s time to revise the country’s conscription system to expand exemptions to include prominent entertainers like BTS, or not to provide such benefits to anyone.

With lawmakers squabbling at Parliament and surveys showing sharply split public opinions over offering exemptions to BTS members, their management agency said in October that all BTS members would perform their compulsory military duties. Big Hit Music said that both the company and the members of BTS "are looking forward to reconvening as a group again around 2025 following their service commitment."

Jin, who turned 30 earlier this month, entered the boot camp at Yeoncheon, a town near the tense border with North Korea, for five weeks of basic military training together with other new conscript soldiers, the Defense Ministry said. After the training involving rifle shooting, grenade throwing and marching practices, he and other conscripts would be assigned to army units across the country.

About 20-30 fans — some holding Jin’s photos — and dozens of journalists gathered near the camp. But Jin didn't meet them as a vehicle carrying him moved into the boot camp without getting him out.

"I want to wait (for) Jin and see him go into the military and wish him all the best," Mandy Lee from Hong Kong said before Jin’s entrance to the camp.

"Actually it’s complicated. I wanna be sad. I wanna be happy for him," said Angelina from Indonesia. "Mixed feelings. He has to serve (for) his country." Angelina, like many Indonesians, uses only one name. 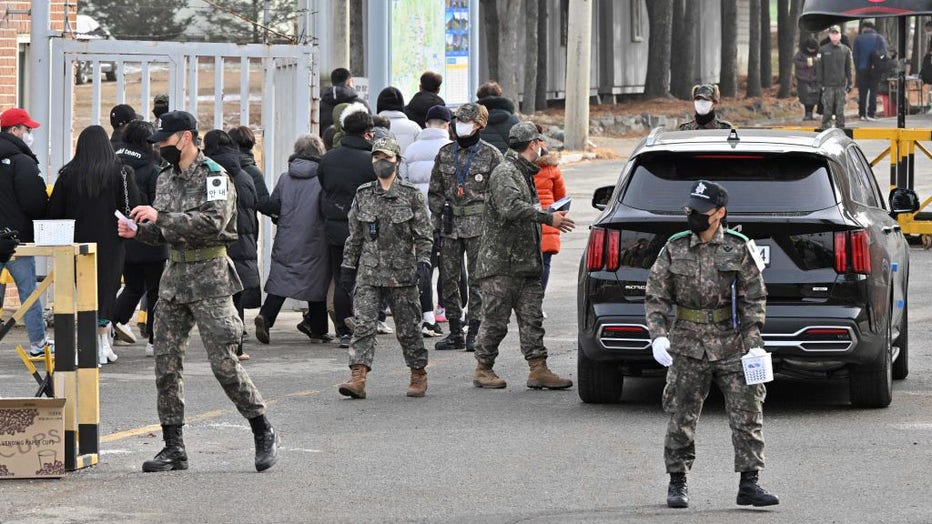 South Korean soldiers stand as South Korean military conscripts and their family members arrive to join the military service at the main gate of a military training unit in Yeoncheon on December 13, 2022, as the place where BTS singer Jin is schedule

A couple dozen fans could be seen as a small turnout given Jin's huge popularity. But Jin and his management agency had earlier asked fans not to visit the site and notified them there wouldn’t be any special event involving the singer, in order to prevent any issue caused by crowding.

Authorities still mobilized 300 police officers, soldiers, emergency workers and others to maintain order and guard against any accidents, according to the army. Strict safety steps were expected as South Korea is still reeling from the devastating Halloween crush in October in Seoul that killed 158 people.

Hours before entering the camp, Jin — whose real name is Kim Seok-jin — wrote on the online fan platform Weverse that "It’s time for a curtain call." He posted a photo of himself Sunday with a military buzzcut and a message saying, "Ha ha ha. It’s cuter than I had expected."

By law, all able-bodied South Korean men must serve in the military for 18-21 months under a conscription system established to deal with threats from North Korea. But the law gives special exemptions to athletes, classical and traditional musicians, and ballet and other dancers if they have won top prizes in certain competitions and enhance national prestige. K-pop stars and other entertainers aren’t given such benefits even if they gain worldwide fame and win big international awards.

"Though BTS members have opted to go to the military, there are still some sort of regrets," said Jung Duk-hyun, a pop culture commentator. "Those in the pop culture sector experience little bit of disadvantages and unfairness, compared with those in the pure art sector or athletes. This will likely continue to be an issue of controversy so I wonder if it must be discussed continuously."

Exemptions or dodging of duties are a highly sensitive issue in South Korea, where the draft forces young men to suspend their studies or professional careers. Defense Minister Lee Jong-sup and Lee Ki Sik, head of South Korea’s enlistment office, previously said it would be "desirable" for BTS members to fulfill their military duties to ensure fairness in the country’s military service.

Chun In-bum, a retired lieutenant general who commanded South Korea’s special forces, said the government must move to repeal any exemptions as the military’s shrinking recruitment pool is "a very serious" problem amid the country’s declining fertility rate. He called a debate over BTS’s military service "unnecessary" as it wasn’t raised by BTS members, who have shown willingness in carrying out their duties.

The members of the K-Pop stars, BTS will perform their required military service, placing the group on hiatus until around 2025. LiveNOW from FOX's Josh Breslow spoke with Nicole Santero, a K-Pop expert at University of Nevada Las Vegas, who helped break down the developments.

BTS was created in 2013 and has a legion of global supporters who call themselves the "Army." Its other members are RM, Suga, J-Hope, Jimin, V and Jungkook, who is the youngest at 25. The group expanded its popularity in the West with its 2020 megahit "Dynamite," the band’s first all-English song that made BTS the first K-pop act to top Billboard’s Hot 100. The band has performed in sold-out arenas around the world and was even invited to speak at United Nations meetings.

Hybe Corp., the parent company of Big Hit, said in October that each member of the band for the time being would focus on individual activities scheduled around their military service plans. In October, Jin released "The Astronaut," a single co-written by Coldplay.

Jung, the commentator, said sold projects could give BTS members much-needed time to develop themselves after working together as a group for many years. But Cha Woo-jin, a K-pop commentator, said it’s unclear if BTS would enjoy the same popularity as a group when they get together again after finishing their military duties in a few years.

In August, Lee, the defense minister, said BTS members who are serving would likely be allowed to continue practicing and to join other non-serving BTS members in overseas group tours.

Cha said K-pop’s global influence wouldn’t be hurt much because of BTS members’ enlistments as they "appear to represent K-pop but aren’t everything of K-pop." Chung agreed, saying that other K-pop groups like BLACKPINK, Stray Kids and aespa could rise further.