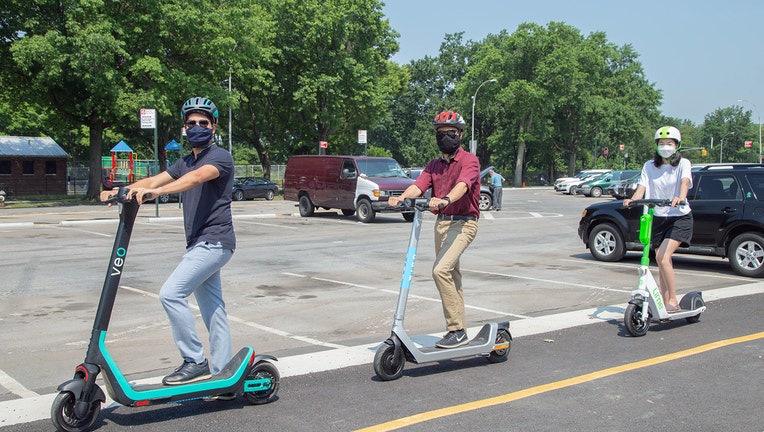 NEW YORK - Not that long ago, electric scooters were illegal in New York City. That finally changed last summer. And in just a few days, an official e-scooter sharing pilot program will launch in the Bronx.

The two-year program begins on Tuesday, Aug. 17, 2021, the Department of Transportation announced. Phase 1 will bring up to 3,000 scooters from the companies Bird, Lime, and Veo. That could increase to 6,000 scooters when Phase 2 begins sometime in 2022.

"This is an exciting announcement as we officially bring shared micromobility to the East Bronx community," Transportation Commissioner Hank Gutman said in a statement. "With safety as our top priority, we look forward to a continued collaboration with Bird, Lime, and Veo, elected officials, and local Bronx communities to make e-scooter share an effective, convenient, and equitable way to get around."

Based on input from community meetings in recent months, the Department of Transportation created dozens of painted parking corrals on sidewalks in certain areas.

"Riders wanting to park in areas with corrals, must return their e-scooter to a corral," DOT said in a news release. "In other parts of the zone, riders can park on the sidewalk, against the curb, and out of the pedestrian path of travel."

RELATED: When can I use a bike lane in NYC? E-bike, e-scooter, moped differences explained

You must be 18 or older to ride. You simply unlock a scooter using the specific brand's app. The cost to ride a Veo or Bird scooter is $1 to unlock and then 39 cents per minute. Lime scooter rides cost $1 to unlock and 30 cents per minute. All three companies have agreed to provide discounts for low-income New Yorkers enrolled in federal and state assistance programs.

In praising the launch of the e-scooter program, the head of the advocacy group Transportation Alternatives said continuing to build protected bike lanes, which scooters are allowed to use, remains an important part of street safety. 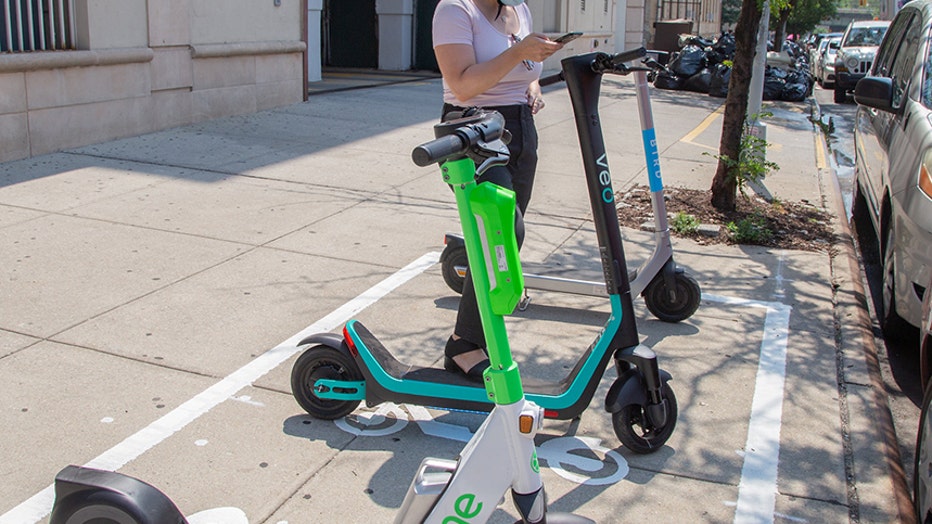 "Bringing micromobility to the East Bronx will shorten commutes, support local businesses, and shift our city towards a future that is less reliant on cars," executive director Danny Harris said in a statement. "One of the best ways to ensure the pilot is a success is by building out more protected on-street infrastructure, and we will continue to work with community members, elected officials, and the NYC DOT team to ensure these life-saving projects advance without delay."

"E-scooter users are permitted to ride in bike lanes and on streets with speed limits no greater than 30mph," according to DOT. "E-scooter users may not ride on the sidewalk and must obey all local traffic laws."

The entire 18-square-mile pilot zone is home to 570,000 people, including 25,000 NYCHA residents, according to city officials. 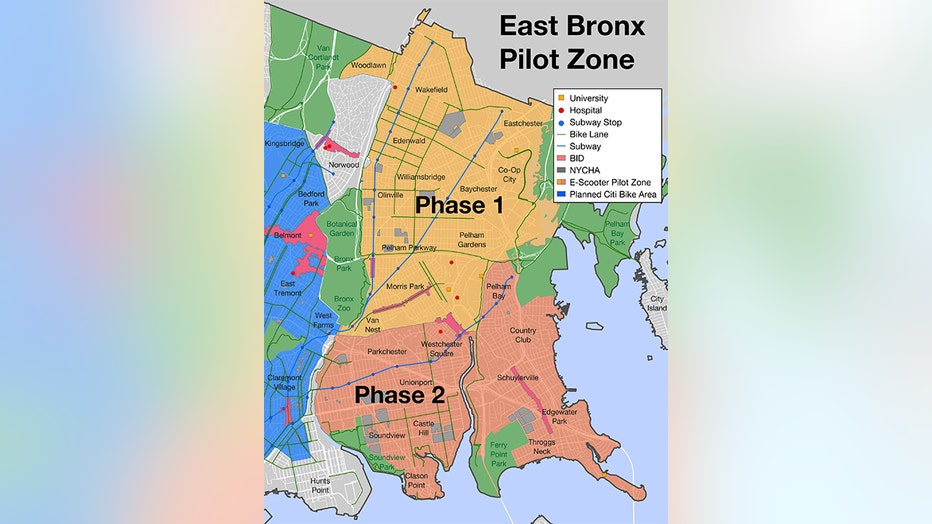 A map showing two areas of the east Bronx that are the pilot zone for an electric scooter share program. (NYC Transportation Department)