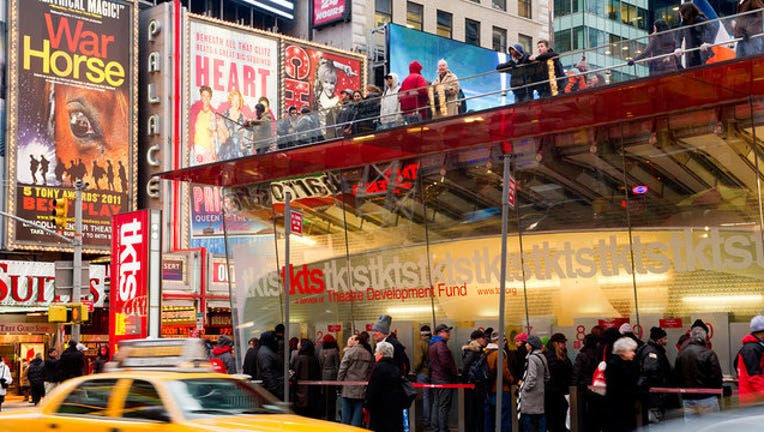 NEW YORK (AP) - This past spring, dance teacher Donna Cory and one of her students took in the new "Oklahoma!" revival on Broadway.

They thought the musical was bold and historic and urgently current. But perhaps one of the coolest things about the experience was the cost - $0.

Cory is one of millions taking advantage of a somewhat uncelebrated loyalty plan called Audience Rewards, a sort of frequent flyer program for theater fans.

Members earn points that can be redeemed for seats to upcoming shows, merchandise or - if enough points are hoarded - special master classes by Broadway insiders, behind-the-scenes tours or meet-and-greets with celebrities like Jake Gyllenhaal or Laura Benanti.

Cory, a high school arts teacher who lives in southern California, often redeems her points by unselfishly sending her students and former students to once-in-a-lifetime experiences, like master dance classes hosted by "Wicked" or "A Bronx Tale."

"I could spend my points on autographed posters, but I have a house full of that," she said. "It's time to give back. I had some amazing high school teachers. You pass it on."

The free program connects users to ticket sellers like Telecharge or Ticketmaster. Users just need to plug in their unique Audience Rewards number and every dollar they spend buying tickets earns at least two so-called ShowPoints. Some shows offer 1,000 to 3,000 bonus points, meaning first-time users can immediately accrue cheaper tickets the next time they see a show. There's even a section for fans to earn points by answering trivia questions.

Katie Dalton, the executive vice president of Audience Rewards, said the program is a powerful marketing tool that taps into avid theater fans. It started 10 years ago and has 2.6 million members. That compares with 14.8 million attending shows last season.

Dalton said she has even tagged along on a backstage tour of "Wicked" and "had that life-changing, wide-eyed moment even though that's what I do for a living."

"What we are offering is the chance for an everyday fan who just loves Broadway to be able to access this stuff as a result of loving Broadway," she said.

The program leverages a unique coalition that includes the owners of all 41 Broadway theaters - including the Nederlander, Shubert and Jujamcyn chains - as well as off-Broadway theaters, cabarets and the Metropolitan Opera. Unlike most loyalty programs that try to keep members flying a specific airline or using a bank's credit card, Audience Rewards doesn't limit options to a single business.

VIPs - or those who bag 10,000 points in a year - can bid on special events, which in the past have included a walk-on role at "Rock of Ages," puppet classes at "Avenue Q" and pie-baking classes at "Waitress." This month, VIPs get a chance to meet Gyllenhaal and Tom Sturridge (co-starring in "Sea Wall/A Life") - as long as they are willing to cash in at least 15,000 points and pay $50.

Cory, the teacher in California, accrues points during every spring break when she takes seniors in her highest dance classes to New York for classes, tours and shows. "I'm actively using them as a teaching tool," she said.

"These are bucket-list items for people except that you get to fill that bucket over and over because every time you go to a show, you're further on your way to doing something special," he said.

What's in it for Broadway shows? For one, people tend to spend more in a loyalty program than if they're discount hunters. And producers can influence behavior, like convincing members to go see a show on a rainy Wednesday night in September by upping the number of points earned.

"The market responds. It makes a difference and it helps them fill up those tough evenings," said Flateman. "What we wanted to do from the beginning is to reward patrons for their loyalty and encourage them to go to shows more often."

The program certainly has been a hit with Sara Rutherford, a senior financial analyst who works in Manhattan. She's a savvy Audience Rewards VIP and seeks out good deals to remain that way. (That's partly why she's seeing "Jersey Boys" soon - its offer of bonus points will put her over the top for another year.)

Not long ago, she saw "The Prom" on Broadway, paying just $60 for center orchestra seats and earning 1,000 points. "That was a no-brainer and I ended up loving it. So I think it encourages me to see shows I wouldn't necessarily pick as my first choice," she said. "I think it's really geared toward getting people more into theater and it's worked, for me at least."

Mark Kennedy is at http://twitter.com/KennedyTwits