LONDON (AP) - British Prime Minister Boris Johnson has tested positive for the new coronavirus, the first leader of a major nation to contract COVID-19, but he insisted Friday that he remains in charge of the U.K.'s response to the outbreak.

Johnson, 55, said he was tested Thursday on the advice of the country's chief medical officer after showing “mild symptoms" of a temperature and a persistent cough. 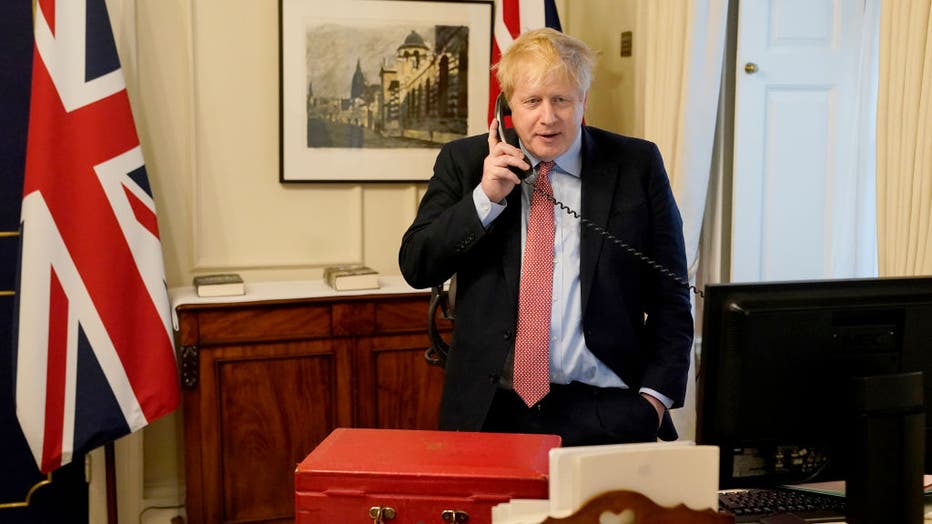 Prime Minister Boris Johnson on the telephone to Queen Elizabeth II for her Weekly Audience during the coronavirus (COVID-19) pandemic.(Photo by Andrew Parsons-WPA Pool/Getty Images)

“I’ve taken a test, that’s come out positive so I am working from home, I am self-isolating, and that’s entirely the right thing to do," Johnson said in a video message posted on his Twitter account.

“But be in no doubt that I can continue, thanks to the wizardry of modern technology, to communicate with all my top team to lead the national fightback against coronavirus.”

Health Secretary Matt Hancock was also confirmed to have the virus. Hancock, 41, tweeted: “Thankfully my symptoms are mild.”

Johnson is the highest-profile political leader to have contracted the virus, which has infected more than 500,000 people around the world.

The diagnoses of Johnson and Hancock are the latest evidence that no one — no matter how high-profile — is untouched by the global pandemic.

Politicians may be especially exposed, since they meet large numbers of people and hold multiple meetings daily. Britain's Parliament continued to meet as the virus spread, before it was eventually suspended on Tuesday.

Elsewhere in the world, German Chancellor Angela Merkel, Danish Prime Minister Mette Frederiksen and South African President Cyril Ramaphosa have all been tested and found to be negative. Canadian Prime Minister Justin Trudeau is self-isolating after his wife tested positive for COVID-19.

Britain's government is run from a series of interconnected buildings centered on 10 Downing St. and adjoining houses — a warren of rooms and narrow corridors that is both the prime minister's home and the workplace of hundreds of people.

Johnson's spokesman, James Slack, said the prime minister was self-isolating in his apartment, which is above 11 Downing St., and would have his meals left outside his door by staff.

"For now the prime minister’s symptoms are mild and he is continuing to do all of the same functions he was performing before. The only difference is he will now have to do that by teleconferencing," Slack said.

Where did coronavirus get its name?

COVID-19 originated in China, but where did the coronavirus get its name?

He would not say whether Johnson's fiancee, Carrie Symonds, who is pregnant, was currently living in Downing St.

Slack said several other Downing St. staff are self-isolating but he did not know of any other confirmed cases.

The government said that if Johnson is unable to work, Foreign Secretary Dominic Raab will replace him.

For most people, the coronavirus causes mild or moderate symptoms, such as fever and cough that clear up in two to three weeks. But for others, especially older adults and people with existing health problems, the virus can cause more severe illness, including pneumonia, and sometimes death.

Johnson has met in person with some senior ministers and officials this week, and has appeared at press conferences alongside his top medical and scientific advisers.

On Thursday evening, Johnson stood outside his front door to join in a national round of applause for health care workers. Slack said the prime minister was careful to observe social distancing rules while he did so, standing several meters away from Treasury chief Rishi Sunak, who also took part.

Earlier this week Prince Charles, the heir to the British throne, announced that he had tested positive for the virus. His mother, 93-year-old Queen Elizabeth II, is self-isolating at Windsor Castle as a precaution.

Buckingham Palace said Johnson and the Queen last met on March 11. The pair have held their weekly audience by phone for the past two weeks.

Johnson has been criticized by his opponents for his Conservative government’s initial reluctance to impose tough restrictions on movement and the economy to try to stem the spread of the virus.

Early this month, Johnson recounted shaking hands with medics treating coronavirus patients at a hospital and said “I continue to shake hands.”

The government’s initial advice was that people should wash their hands frequently. As the number of cases soared, the escalated to include the closure of schools, bars, restaurants and non-essential shops, a nationwide order for everyone but key workers to stay home.

Johnson's diagnosis comes at the end of a week when he effectively closed down much of the British economy and introduced strict curbs on people's day-to-day movements.

The pound suffered a knee-jerk retreat in the immediate aftermath of Johnson’s disclosure but had soon recouped most of those losses and was trading 0.5% higher on the day at $1.2257.

In his Twitter video, Johnson thanked everyone in the public services for their “amazing national effort,” and praised everyone who is staying at home.

Johnson's political opponents wished him well. Jeremy Corbyn, leader of the main opposition Labour Party, wished the prime minister a speedy recovery and relayed his hope that his family is “safe and healthy.” Corbyn said everyone’s health “depends on everybody else.”

Danica Kirka contributed to this story.