LOUISVILLE, Ky. (AP) - The police officer who fatally shot Breonna Taylor described seeing only “shadowy mass” and said he didn't recall firing the 16 bullets later matched to his gun. As she lay bleeding, Taylor's boyfriend called his mother before dialing 911.

And neighbors roused by the gunfire at Taylor's apartment after midnight on March 13 only added to conflicting testimony about whether police serving a narcotics warrant announced themselves before using a battering ram to break down her door.

Details of the chaos and confusion during the raid that resulted in the 26-year-old Black woman's death were revealed in 15 hours of audio recordings released Friday. They contained testimony and recorded interviews presented last month to the Kentucky grand jury that decided not to charge any Louisville police officers for killing Taylor.

“If you told me I didn’t fire a gun, I would be like, OK,” detective Myles Cosgrove told investigators soon after the shooting.

In fact, investigators determined Cosgrove shot 16 of the 32 bullets police fired into Taylor's apartment, responding to a single gunshot from her boyfriend when they rammed down her door. Evidence showed one of Cosgrove's bullets killed Taylor.

Her boyfriend, Kenneth Walker, said he thought intruders had burst into Taylor's home, not police. As she lay bleeding, Walker said he called his mother — then dialed 911, telling an operator: “Somebody kicked in the door and shot my girlfriend.”

The dramatic accounts of the moments before Taylor's death are key to a case that has fueled nationwide protests against police brutality and systemic racism. Police said they knocked and announced themselves for a minute or more before using a battering ram to get inside. Walker said he did not hear officers identify themselves, perhaps because he was too far from the door.

If he’d heard them, Walker said, “it changes the whole situation because there’s nothing for us to be scared of.”

The recordings mark a rare public look into grand jury proceedings that are typically kept secret. Though they shed light on what happened as police fired 32 shots in the last moments of Taylor's life, nothing in them appeared to change the fundamental narrative that was previously made public.

The recordings also do not include any discussion of potential criminal action on the part of the officers who shot Taylor because Kentucky Attorney General Daniel Cameron determined beforehand that they had acted in self-defense. As a result, he did not seek charges against police in her killing.

A court ruled the recordings should be released after the jury's decision last week angered many in Louisville and around the country and set off renewed protests. One of the jurors also sued to make the proceedings public.

NAACP Legal Defense and Educational Fund President Sherrilyn Ifill called the release “a critical first step,” but the group will release its own assessment of how the evidence was presented.

On the March night in question, police arrived after midnight at Taylor's apartment with a narcotics warrant to search the home. She and her boyfriend were in bed. Within minutes, she had been shot five times.

Though police had a “no-knock” warrant that would have allowed them to burst in unannounced, they agreed it was better to “give them a chance to answer the door,” said Louisville police Lt. Shawn Hoover.

In a police interview played for the grand jury, Hoover said the officers announced themselves as police and knocked three times. He estimated they waited 45 seconds to a minute before going through the door. 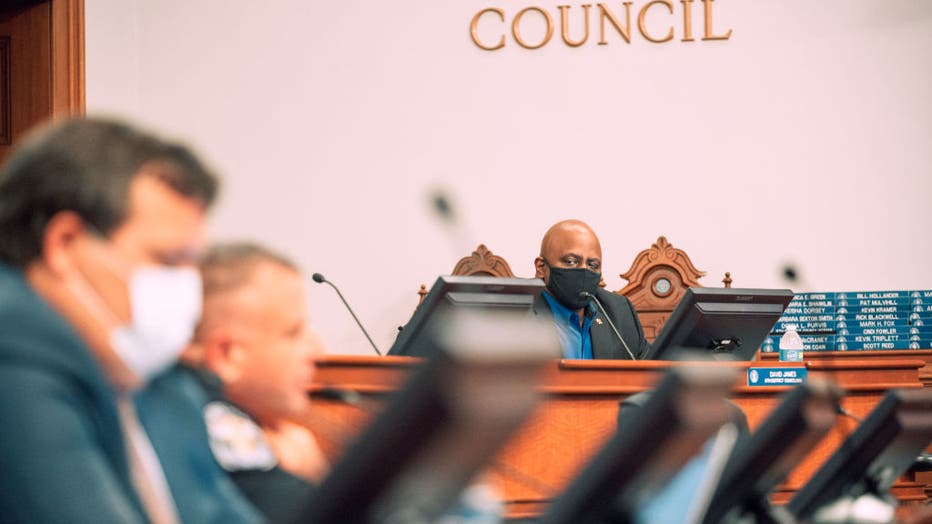 David James, President of the Metro Council, watches as Robert Shroeder speaks during the council's Government Oversight and Audit Committee hearing to address how police have handled protests and unrest in the response to the killing of Breonna Tayl

Another officer said they waited as much as two minutes.

Walker said he heard knocking, but that police did not respond to his and Taylor's repeated requests that whoever was at the door identify themselves. He told police that he grabbed his gun, and they both got up and walked toward the door.

“She’s yelling at the top of her lungs, and I am too at this point. No answer. No response. No nothing,” said Walker.

Police said they hit the door three times with a battering ram before getting inside. Detective Michael Nobles said officers made so much noise that an upstairs neighbor came outside.

Walker fired once, hitting detective Jonathan Mattingly in the leg as soon as he leaned inside the apartment.

Mattingly said he fired his gun while falling on his backside.

Cosgrove came through the door and saw Mattingly on the ground. In his interview with investigators, he spoke to the confusion of the confrontation, saying he saw a “distorted shadowy mass, a figure in front of me.”

Officer Brett Hankison, who has since been fired, told investigators that he saw flashes from a gun coming from inside the apartment and began shooting.

Hankison was the only officer indicted by the grand jury, which charged him with wanton endangerment for shooting into another home with people inside. He has pleaded not guilty.

“What I saw at the time was a figure in a shooting stance, and it looked as if he was holding, he or she was holding, an AR-15 or a long gun, a rifle,” Hankison said.

Walker was, in fact, using a handgun.

While Walker told police he did not hear officers identify themselves, Hoover, the police lieutenant, said he believed Walker and Taylor “ambushed” the officers.