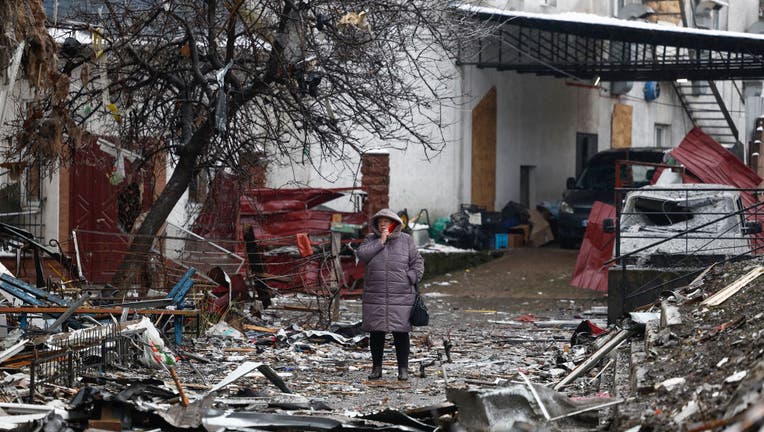 Residents return to view their homes in Vyshhorod after yesterday’s missile strikes on November 24, 2022 in Vyshorod, Ukraine. (Photo by Jeff J Mitchell/Getty Images)

KYIV, Ukraine - Residents of Ukraine's bombed capital clutched empty bottles in search of water and crowded into cafés for power and warmth Thursday, switching defiantly into survival mode after new Russian missile strikes a day earlier plunged the city and much of the country into the dark.

In scenes hard to believe in a sophisticated city of 3 million, some Kyiv residents resorted to collecting rainwater from drainpipes, as repair teams labored to reconnect supplies.

Friends and family members exchanged messages to find out who had electricity and water back. Some had one but not the other. The previous day's aerial onslaught on Ukraine's power grid left many with neither.

Cafés in Kyiv that by some small miracle had both quickly became oases of comfort on Thursday. 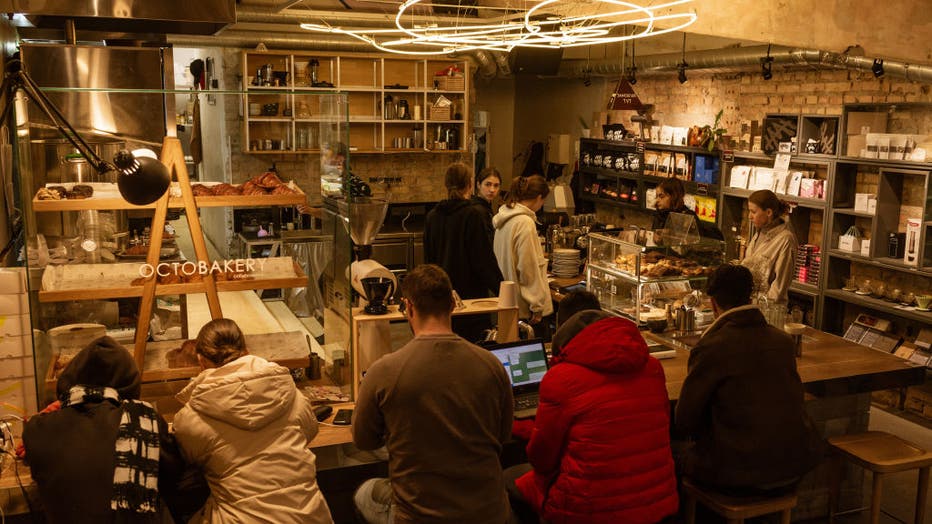 Kyiv surviving power and water outages. After yesterday attack 70% of people in Kyiv have no electrical power at home. Water is restored in the left back and some areas of right bank. People work in a co-working space OCTO tower due to the lack of el

Oleksiy Rashchupkin, a 39-year-old investment banker, awoke to find that water had been reconnected to his third-floor flat but power had not. His freezer thawed in the blackout, leaving a puddle on his floor.

So he hopped into a cab and crossed the Dnieper River from left bank to right, to a café that he’d noticed had stayed open after previous Russian strikes. Sure enough, it was serving hot drinks, hot food and the music and Wi-Fi were on.

"I’m here because there is heating, coffee and light," he said. "Here is life." 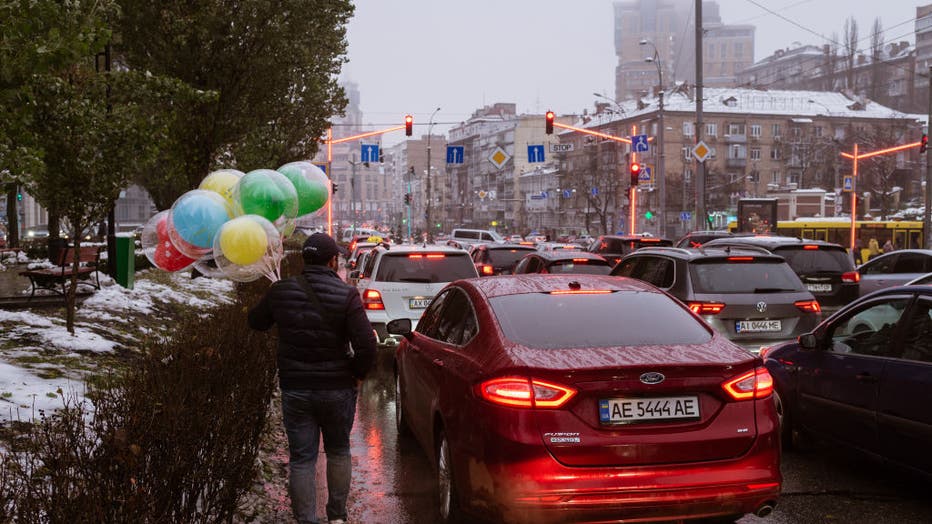 Kyiv surviving power and water outages. After yesterday attack 70% of people in Kyiv have no electrical power at home. Water is restored in the left back and some areas of right bank. A man sells balloons street in Lesia Ukraina Avenue. Kyiv, on Nove

Kyiv Mayor Vitali Klitschko said about 70% of the Ukrainian capital was still without power on Thursday morning.

As Kyiv and other cities picked themselves up, Kherson on Thursday came under its heaviest bombardment since Ukrainian forces recaptured the southern city two weeks ago. The barrage of missiles killed four people outside a coffee shop and a woman was also killed next to her house, witnesses said, speaking to Associated Press reporters.

In Kyiv, where cold rain fell on the remnants of previous snowfalls, the mood was grim but steely. The winter promises to be a long one. But Ukrainians say that if Russian President Vladimir Putin's intention is to break them, he should think again.

"Nobody will compromise their will and principles just for electricity," said Alina Dubeiko, 34. She, too, sought out the comfort of another, equally crowded, warm and lit café. Without electricity, heating and water at home, she was determined to keep up her work routine. Adapting to life shorn of its usual comforts, Dubeiko said she uses two glasses of water to wash, then catches her hair in a ponytail and is ready for her working day. 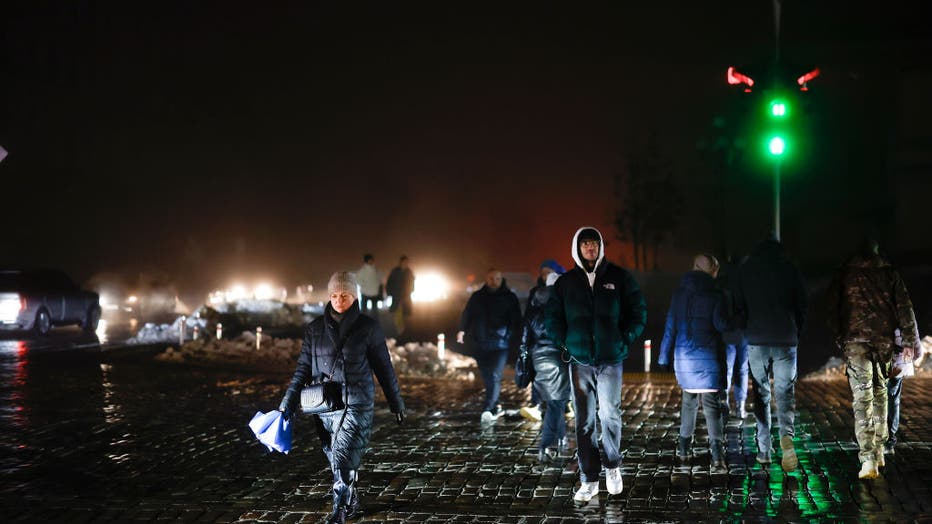 She said she'd rather be without power than live with the Russian invasion, which crossed the nine-month mark on Thursday.

"Without light or you? Without you," she said, echoing remarks President Volodymyr Zelenskky made when Russia on Oct. 10 unleashed the first of what has now become a series of aerial attacks on key Ukrainian infrastructure. 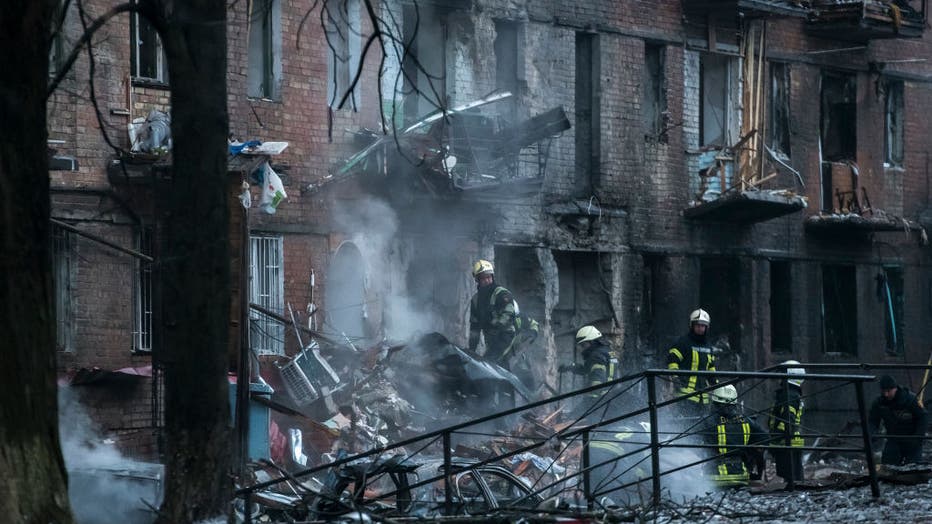 Rescuers work at a site of a residential building destroyed by a Russian missile attack in the Vyshhorod town, near Kyiv, Ukraine, November 23, 2022 (Photo by Maxym Marusenko/NurPhoto via Getty Images)

Russian Defense Ministry spokesman Igor Konashenkov acknowledged Thursday that it targeted Ukrainian energy facilities. But he said they were linked to Ukraine’s military command and control system and that the aim was to disrupt flows of Ukrainian troops, weapons and ammunition to front lines. Authorities for Kyiv and the wider Kyiv region reported a total of 7 people killed and dozens of wounded.

Russian U.N. Ambassador Vassily Nebenzia said: "We are conducting strikes against infrastructure in response to the unbridled flow of weapons to Ukraine and the reckless appeals of Kyiv to defeat Russia." 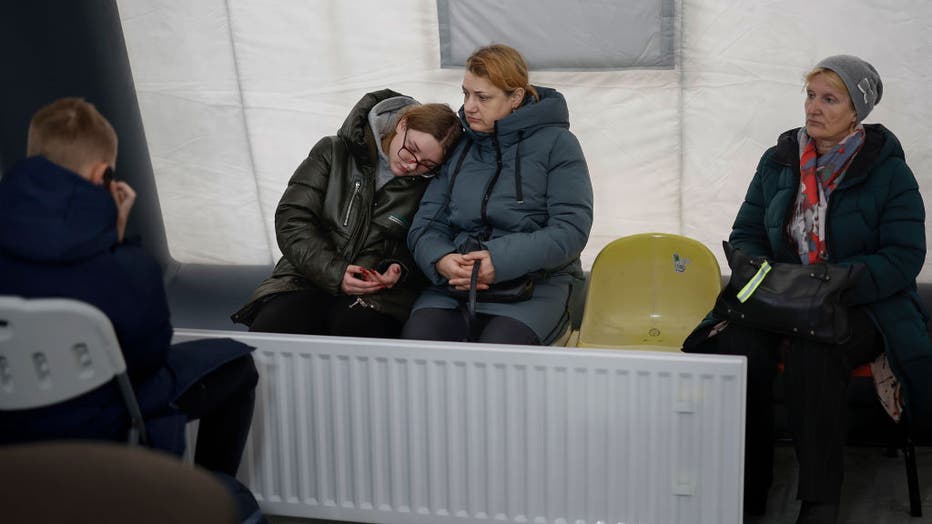 BUCHA, UKRAINE - NOVEMBER 24: Members of the public gather inside The Point of Invincibility a special shelter where citizens can come in case of long power outages following yesterday’s missile strikes on November 24, 2022 in Bucha, Ukraine. Kyiv an

In Kyiv, people lined up at public water points to fill plastic bottles. In a strange new war-time first for her, 31-year-old Health Department employee Kateryna Luchkina resorted to collecting rainwater from a drainpipe, so she could at least wash her hands at work, which had no water. She filled two plastic bottles, waiting patiently in the rain until they had water to the brim. A colleague followed behind her, doing the same.

"We Ukrainians are so resourceful, we will think of something. We do not lose our spirit," Luchkina said. "We work, live in the rhythm of survival or something, as much as possible. We do not lose hope that everything will be fine."

The city mayor said on Telegram that power engineers "are doing their best " to restore electricity. Water repair teams were making progress, too. In the early afternoon, Klitschko announced that water supplies had been restored across the capital, with the caveat that "some consumers may still experience low water pressure."

Power, heat and water were gradually coming back elsewhere, too. In Ukraine’s southeastern Dnipropetrovsk region, the governor announced that 3,000 miners trapped underground because of power blackouts had been rescued. Regional authorities posted messages on social media updating people on the progress of repairs but also saying they needed time.

Mindful of the hardships — both now and ahead, as winter progresses — authorities are opening thousands of so-called "points of invincibility" — heated and powered spaces offering hot meals, electricity and internet connections. More than 3,700 were open across the country of Thursday morning, said a senior official in the presidential office, Kyrylo Tymoshenko.

In Kherson, hospitals without power and water are also contending with the gruesome after-effects of intensifying Russian strikes. They hit residential and commercial buildings Thursday, setting some ablaze, blowing ash skyward and shattering glass across streets. Paramedics helped the injured.

Olena Zhura was carrying bread to her neighbors when a strike that destroyed half of her house wounded her husband, Victor. He writhed in pain as paramedics carried him away.

Follow AP coverage of the war in Ukraine at: https://apnews.com/hub/russia-ukraine