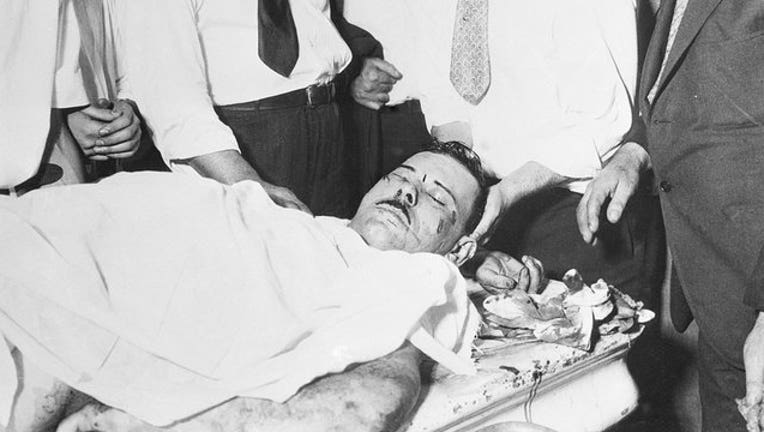 12/11/34-Chicago, Illinois: The nation's public enemy No. 1 on a slab in the county morgue in Chicago, surrounded by policemen and coroner's assistants, after he had been slain by federal agents and police outside a Chicago movie house.(Getty)

INDIANAPOLIS (AP) - The body of 1930s gangster John Dillinger is set to be exhumed from an Indianapolis cemetery more than 85 years after he was killed by FBI agents.

The Indiana State Department of Health approved a permit July 3 that Dillinger's nephew, Michael C. Thompson, sought to have the body exhumed from Crown Hill Cemetery and reinterred there.

The permit doesn't indicate the reason for that request.

Health department spokeswoman Jeni O'Malley says the agency expects Dillinger's body will be exhumed and reinterred Sept. 16, based on the permit.

Crown Hill Cemetery spokeswoman Crystal King says the cemetery has no information about those plans.

The FBI says Dillinger's gang killed 10 people during bank robberies and other crimes in the 1930s. FBI agents fatally shot Dillinger in Chicago in July 1934.