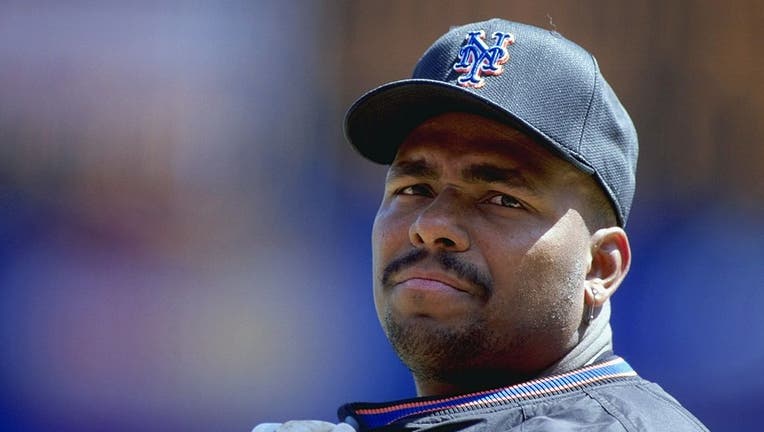 Bobby Bonilla #25 of the New York Mets looks on during the game against the Montreal Expos at the Shea Stadium in Flushing, New York.

NEW YORK - One of the most infamous contracts in sports history is set to make even more money.

Bobby Bonilla's deferred compensation agreement with the New York Mets has sold at auction for $180K on collectibles marketplace Goldin Saturday night, according to USA Today.

In 1999, after a poor final stint with the Mets when he batted .160 with 4 home runs and 18 RBIs in 60 games, Mets management agreed to buy out Bonilla's contract instead of bringing him back for the 2000 season, when he would be paid $5.9M.

The specific terms of that deferment have entered into the annals of sports lore, however, with the team offering to pay Bonilla an installment every year starting on July 1, 2011, and ending on July 1, 2035. With a negotiated 8% interest rate, the annual check comes to about $1.19 million.

That means Bobby will rake in nearly $30 million instead of the original nearly $6 mil.

Now, sports fans in Flushing and all across the nation celebrate July 1 as "Bobby Bonilla Day."

July 1 every year through 2035 is known as Bobby Bonilla Day to Mets fans. Why? Because the retired star is still on the Mets payroll.

USA Today also reported that the winner of the auction will receive two 30-minute zoom calls, one with Bonilla himself and one with Dennis Gilbert, the agent who negotiated the deal. The winner is also receiving a game-used bat from Bonilla's personal collection, a signed baseball, a NFT of Bonilla's contract and will even get to spend a day with Bonilla in New York, including breakfast, a trip to Citi Field for batting practice, a Mets game and dinner.

Bonilla, who last played in the majors in 2001, was always entertaining to watch on the field and in the batter's box. Now 59, Bonilla will keep receiving the deferred compensation checks from the Mets until he is 72, ensuring that the Mets and their fans never forget him.

In his 16-year career, Bonilla also played for the Pittsburgh Pirates, the Baltimore Orioles, the Florida Marlins (with whom he won a World Series), the Atlanta Braves, the St. Louis Cardinals, the Los Angeles Dodgers, and the Chicago White Sox. He hit .279 and amassed 2,010 hits, 287 home runs, 1,173 RBI, and 1,084 runs, according to Baseball-Reference.com.