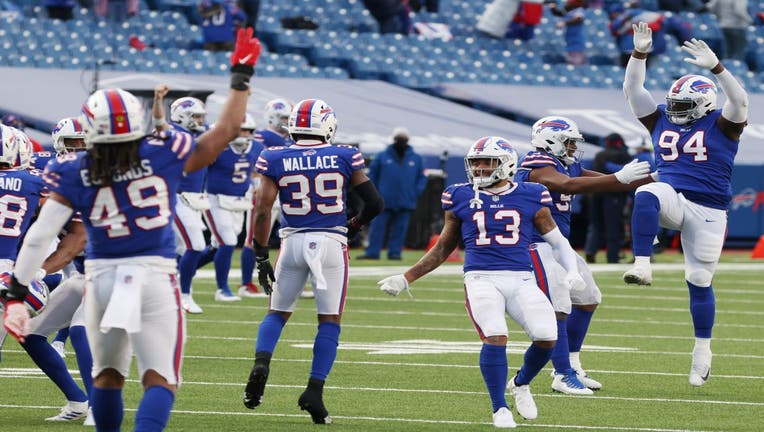 The Buffalo Bills celebrate a 27-24 win during the second half of the AFC Wild Card playoff game against the Indianapolis Colts.

ORCHARD PARK, N.Y. (AP) - The Buffalo Bills earned their first playoff victory in a quarter-century on Saturday when Josh Allen threw two touchdown passes, scored another rushing, and Micah Hyde batted down Philip Rivers' desperation pass for a 27-24 win over the Indianapolis Colts in a wild-card game.

Buffalo snapped an 0-6 postseason skid by winning its first playoff game since a 37-22 win over Miami on Dec. 30, 1995. And it came in the Bills' first home playoff game in 24 years, with a limited number of 6,700 fans in attendance for the first time this season.

The game wasn’t decided until the final play, when Rivers faced fourth-and-11 from Buffalo’s 47. Rivers heaved a deep pass for T.Y. Hilton, who was surrounded by defenders in the right side of the end zone. Hyde broke through the crowd of bodies, leaping up and batting the ball to the ground.

It just so happens, Hyde was one of three Bills defenders that failed to do the same thing in allowing DeAndre Hopkins' 43-yard leaping catch in the final seconds of Arizona’s 32-30 win over Buffalo on Nov. 15.

Rookie kicker Tyler Bass accounted for the decisive points by hitting a 54-yard field goal to put Buffalo up 27-16 with 8:08 remaining.

The Bills added a new entry to a season in which they’ve busted numerous slumps. Buffalo won its first AFC East title in 25 years, and matched a single-season record in victories set in both 1990 and ’91.

The Colts (11-6) ended a season in which they won 11 games for the first time since 2014, and reached the playoffs for the second time in three years under coach Frank Reich.

Rivers finished 27 of 46 for 309 yards and had his career playoff record drop to 5-7 in completing his first — and potentially last — season with the Colts as he ponders retirement.

Diggs, who became Buffalo's first player to lead the NFL in catches and yards receiving, finished with six catches for 128 yards.

The Bills didn't make it easy, with Allen nearly losing a fumble at midfield when sacked for a 23-yard loss by Denico Autry on first down from the Indianapolis 37. Offensive lineman Daryl Williams, however, recovered.

"It doesn’t matter how it looks," said Allen. "It’s the playoffs. It’s win or go home and we got it done. We’ve got to turn our focus to whoever we got next week."

In shades of last year, when Buffalo squandered a 16-0 third-quarter lead in a 22-19 overtime loss at Houston, the Bills nearly squandered a 24-10 fourth-quarter lead after Allen hit Diggs with a perfectly placed pass up the right sideline.

The Colts responded with a seven-play, 75-play drive capped by a 9-yard touchdown pass to Pascal. After Bass upped Buffalo’s lead to 27-16, the Colts scored less than two-minutes later. Rivers hit a wide-open Jack Doyle for a 27-yard touchdown and Doyle caught a 2-point conversion.

The Colts were limited to a touchdown and field goal in the first half after having all five drives cross midfield and enjoying a nine-plus minute edge in time of possession.

The turning point came when the Colts, up 10-7, were unable to score on four snaps inside Buffalo’s 4. Rivers’ pass for Michael Pittman glanced off the diving receiver’s fingertips on fourth down.

Buffalo responded with a 10-play, 96-yard drive capped by Allen's 5-yard keeper with 14 seconds left in the half. Rookie Gabriel Davis had four catches for 85 yards, including a pair of toe-tapping receptions upheld following video reviews.

"Our defense did a great job," Allen said. "Right before half they were able to turn it into points."

With his 5-yard TD rushing and TD completion to Knox, Allen became the fifth player since at least 1940 to score a touchdown rushing, passing and receiving in his playoff career. Allen scored on a 16-yard catch from John Brown in a 22-19 OT loss at Houston a year ago.

The Bills finally had a chance to play in front of their fans this season. State guidelines required each person, including stadium staff and media, to show proof of a negative COVID-19 test taken within 72 hours of kickoff before entering.

Fans were limited to sitting in groups of two and four and scattered throughout the 70,000-seat facility.

They cheered everything from the Bills taking the field for pre-game warmups to Buffalo winning the coin toss.

Colts: Their season is over after losing in the wild-card round for the first time since 2012.

Bills: They advance to the divisional round for the first time since the 1995 playoffs.