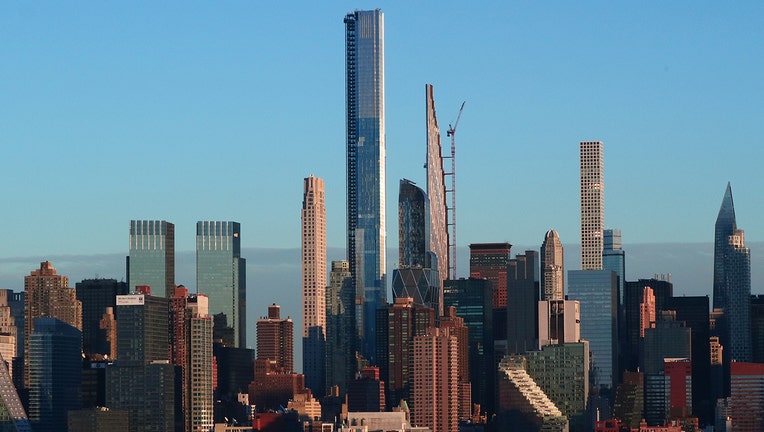 Central Park Tower rises above 220 Central Park South, One 57, the Steinway Tower and 432 Park Avenue along Billionaires' Row as the sun sets in New York City on December 7, 2020 as seen from Weehawken, New Jersey. (Photo by Gary Hershorn/Getty Image

NEW YORK - A luxury home in the same New York City skyscraper where America’s most expensive home was purchased has sold on Billionaire's Row.

An unknown buyer closed Friday on a massive property at 220 Central Park South in Midtown Manhattan, listing agent Jessica Campbell of Nest Seekers International confirmed to FOX Business of Unit 55B, a 3,211-square-foot, three-bedroom on the 55th floor.

The closing marks the first resale in the relatively new building, which was completed in 2019.

The residence, overlooking New York City's iconic Central Park, is located in the same building developed by Vornado Realty Trust where Citadel founder Ken Griffin set the record for buying the most expensive home in the country, for a staggering $238 million in 2019.

The purchasing price of Unit 55B has not yet been disclosed. The condo was listed for resale last month at $33 million.

"This trade will mark the new criterion in the ultra-luxury market in New York City and beyond," Campbell said in a statement to FOX Business.

"It signifies much more than just an impressive price per square foot, especially during this past year, to include renewed confidence and a reset of the market," Campbell added.

As New York City slowly begins to reopen following a year of business shutdowns and a mass exodus — with many Manhattanites flocking to the suburbs — renewed interest in luxury real estate is seeing a continued rebound. A total of 36 luxury properties priced at or above $4 million went into contract last month, including 26 condos, seven co-ops and three townhouses, according to a report published by Olshan Realty as reported by Mansion Global.

Finding a legal space in which to park a car in the Park Slope section of Brooklyn requires either time, patience, or money that most of us feel guilty spending. Just one parking space in a garage at 845 Union Street has been put up for sale via Brown Harris Stevens $300,000.