Austin would be the first Black leader of the Pentagon, a historic nomination that could have even more resonance at a time of extraordinary racial tension in the country.

WASHINGTON - President-elect Joe Biden introduced retired Army Gen. Lloyd Austin to be his secretary of defense on Tuesday, praising him as the right man at the right time. But the choice is putting some Senate Democrats in a bind.

In the past, they've opposed naming recently retired military officers to the post, yet they don't want to be seen as blocking the first African American to lead the Pentagon.

Congress waived a law prohibiting the appointment of such officers in confirming President Donald Trump's choice for the post, retired U.S. Marine Gen. Jim Mattis, in 2017. But that came over the objections of some Democrats, who may now have to reverse themselves to back Austin, who served 41 years in the Army and retired in 2016.

Sticking to their past stands would mean defying a president from their own party just as he takes office. Introducing Austin at an event Wednesday in Delaware, Biden said his pick understands the need to keep clear distance between military and civilian rule, but added, “Just as they did for Jim Mattis, I am asking Congress to grant a waiver.”

“There’s a good reason for this law that I fully understand and respect,” said Biden, whose son Beau, the former Delaware attorney general who died of brain cancer in 2015, served as an attorney on Austin’s staff in Iraq. “I would not be asking for this exception if I did not believe this moment doesn’t call for it.” 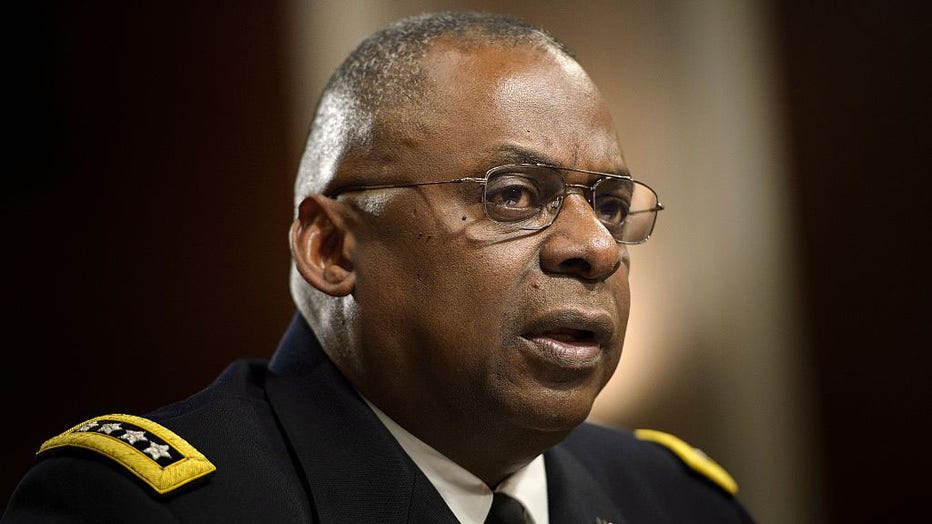 Biden also called Austin "the right person for this job at the right moment,” noting that he is "feared by our adversaries, known and respected by our allies.”

Austin said he comes to “this new role as a civilian leader, with military experience to be sure, but also with a deep appreciation and reverence for the prevailing wisdom of civilian control of our military.”

“I recognize that being a member of the president's Cabinet requires a different perspective and unique responsibility from a career in uniform,” Austin said. “And I intend to keep this at the forefront of my mind.”

He would be the first Black leader of the Pentagon, a historic nomination that could have even more resonance at a time of extraordinary racial tension in the country. Before announcing Austin as his pick, Biden was facing pressure from activists over a lack of diversity in some of the key posts of the Cabinet he was building.

Before Mattis, the only other time Congress approved a waiver was in 1950, for George Marshall.

Rhode Island Sen. Jack Reed, the ranking Democrat on the Senate Armed Services Committee, said at the time of the Mattis confirmation, "Waiving the law should happen no more than once in a generation. ... Therefore, I will not support a waiver for future nominees.”

Now Reed is suggesting he'd be open to the possibility for Austin: “I feel, in all fairness, you have to give the opportunity to the nominee to explain himself or herself,” he told reporters Tuesday.

Similarly, Illinois Sen Dick Durbin opposed the waiver for Mattis but now says, “I was so impressed with his performance that I would consider a waiver for Austin, once I get to know him.”

Civilian control of the military has long been rooted in Americans’ wariness of large standing armies with the power to overthrow the government it is intended to serve. That is why the president is the civilian commander in chief, and it is the rationale behind the prohibition against a recently retired military officer serving as defense secretary.

Some Democrats who agreed to the 2017 waiver saw Mattis as tempering Trump’s impulsive nature and offsetting his lack of national security experience. Now the Mattis period at the Pentagon is viewed by some as an argument against waiving the rule again.

Mattis’ critics say he surrounded himself with military officers at the expense of a broader civilian perspective. He resigned in December 2018 in protest of Trump’s policies.

Chuck Schumer, the Democratic leader in the Senate, struck a cautious tone Wednesday when asked about a wavier for Austin, saying, “I’m gonna have to study that.”

“Bottom line is that Austin’s a very good nominee and we’ll figure out where to go from there," Schumer said.

Connecticut Democratic Sen. Richard Blumenthal said despite the historic racial angle of Austin's nomination, he would not vote for a waiver because it “would contravene the basic principle that there should be civilian control over a nonpolitical military.”

“That principle is essential to our democracy. … I think (it) has to be applied, unfortunately, in this instance,” Blumenthal said Tuesday.

Sen. Tim Kaine, a Virginia Democrat, was non-committal, saying in a statement he’d “closely evaluate the implications for waiving the National Security Act requirement twice in just four years.” But Hawaii Democratic Sen. Brian Schatz, went further Tuesday, saying, “This is becoming a trend, and I don’t like it. It is difficult to imagine voting for a Mattis.”

And, with the Senate almost evenly divided politically — with the outcome of two Georgia special elections pending next month — Biden can only lose so many Democrats, which is unusual for an incoming president from the same party. That means he'll need some Republican support to get Austin confirmed, though, that will be forthcoming, at least in some quarters.

Austin was an unexpected choice as Biden's secretary of defense nominee. Most speculation centered on Michele Flournoy, an experienced Washington hand and Biden supporter. She would have been the first woman to run the Pentagon.

Austin is widely admired for his military service, which includes leading troops in combat in Iraq and Afghanistan and overseeing U.S. military operations throughout the greater Middle East as head of Central Command.

Still, opposition to another waiver has also come from outside the Senate. Kori Schake, director of foreign and defense policy studies at the American Enterprise Institute think tank, tweeted that she had reluctantly supported a waiver for Mattis because she believed Trump posed "a threat to Constitutional governance domestically and the liberal order internationally. Thankfully, Biden is neither, so the circumstances don’t support a waiver.”

Biden has countered concerns by arguing that Austin knows that a Pentagon chief’s duties are different from those of a military officer. He said Austin is aware that “the civil-military dynamic has been under great stress these past four years,” an allusion to Trump’s hiring of numerous retired generals for key posts early in his administration, including Mattis.