President Joe Biden received a 2021 hurricane season briefing from FEMA headquarters on May 24, 2021, and gave remarks to reporters.

Speaking from FEMA headquarters in Washington, D.C., the president said funding that was previously provided in 2020 will be doubled this year.

"Today, I’m announcing that FEMA is going to make a $1 billion available to the states, territories, tribes and rural communities through the Building Resilient Infrastructure and Communities program," Biden said.

A portion of the funding from the so-called "BRIC" program will be targeted to disadvantaged communities, he said.

In a statement, the White House said the BRIC program seeks to "categorically shift the federal focus from reactive disaster spending and toward research-supported, proactive investment in community resilience so that when the next hurricane, flood, or wildfire comes, communities are better prepared."

The White House also announced the launch of "next-generation climate data systems" at NASA to help better understand and track the impact of climate change. 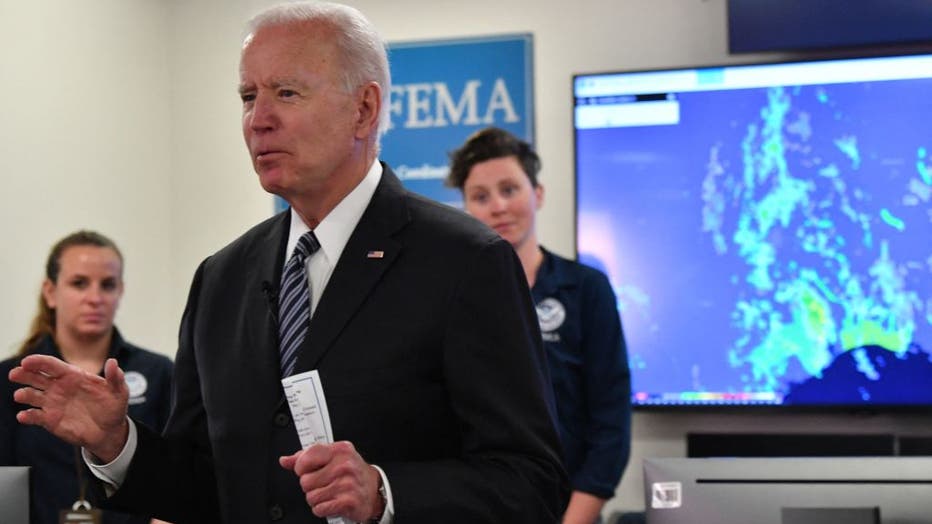 President Joe Biden participates in a briefing on the upcoming Atlantic hurricane season at FEMA headquarters on May 24, 2021 in Washington, D.C. (Photo by NICHOLAS KAMM/AFP via Getty Images)

The president’s visit came on the heels of the first named storm in the Atlantic this year. Ana began as a subtropical storm early Saturday northeast of Bermuda, then transitioned to a tropical storm on Sunday. It then weakened to a depression later in the day.

Now a post-tropical cyclone, the hurricane center said it would dissipate on Monday.

Hurricane season doesn't officially start until June 1 and runs through November. Ana's formation made 2021 the seventh year in a row when a named storm formed before the season began, according to FOX 13 Tampa Bay.

Meteorologists have predicted that the 2021 hurricane season will be busier than normal, but not to the level of last year's record-breaking season.

The National Oceanic and Atmospheric Administration forecasted that the hurricane season will see 13 to 20 named storms. Six to 10 of those storms will become hurricanes and three to five will be major hurricanes with winds of more than 110 mph, the agency predicted.

Since 1990, a typical season sees 14 named storms, seven hurricanes and three major hurricanes — a climate normal that has increased in recent decades. There’s a 60% chance that this hurricane season will be busier than normal and only a 10% chance it will be below normal, NOAA said.

Several universities and private weather companies also make hurricane season forecasts, with all of them echoing NOAA’s predictions. They predicted 16 to 20 named storms, seven to 10 hurricanes and three to five major hurricanes.

Lead NOAA forecaster Matthew Rosencrans said the season looks to be busy because of warmer water, which fuels storms; reduced cross winds that decapitate storms; and more seeds of stormy weather coming off the coast of Africa. There is also no El Nino weather event, the natural temporary warming of the central Pacific that squelches Atlantic hurricane activity, he added.

Atlantic waters are nearly 0.68 degrees warmer than normal, which is not as hot as 2020 when they were 1 degree above normal, Rosencrans said.

Last year, there were 30 named storms — so many that meteorologists ran out of names and dipped into the Greek alphabet to identify them. There were 14 hurricanes last year, seven of them major.

Meteorologists earlier this year decided to ditch the Greek alphabet after the normal list of names runs out, instead creating a special overflow list. Seven of last year’s storms caused more than $1 billion in damage.

Earlier this month, Biden visited Lake Charles, Louisiana, a city along the Gulf Coast that was slammed by two hurricanes last year over the course of six weeks, while pushing the case for his $2.3 trillion infrastructure plan.