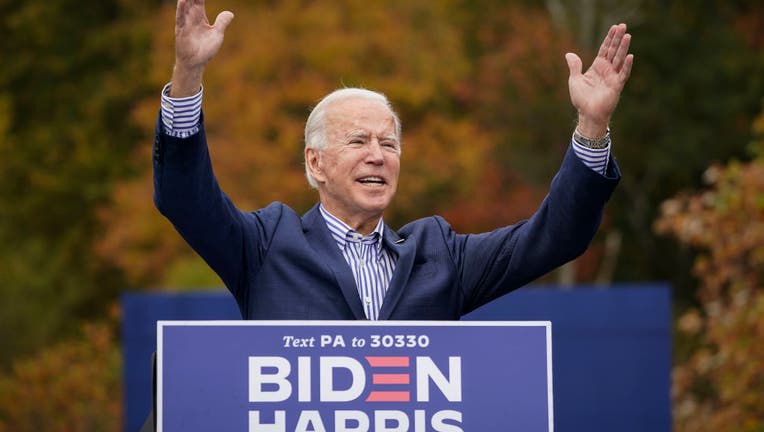 Biden won all five votes in the small New Hampshire township that historically tallies their results just after midnight. In doing so, he gained the first victory on Election Day.

"The last candidate to win in a landslide there was Richard Nixon in 1960," tweeted Fox News multimedia reporter Rob DiRienzo.

Nearby Millsfield, roughly 12 miles to the south of Dixville Notch, also voted for president just after the stroke of midnight. President Donald Trump won early Tuesday, with 16 votes to Biden's five.

Located in a remote part of northern New Hampshire, about 20 miles south of the Canadian border, Dixville Notch has been an icon of midnight voting for decades.

Through the years the media began to ritually swarm the town on election eves to watch the first tallies come in. By tradition, the election was held in the storied Ballot Room at the Balsams Resort, a hotel in the center of the town. Presidential candidates from Ronald Reagan to John McCain made sure to make the trip up to voters at the Notch.

This year was the 60th anniversary of the tradition, which started in November 1960.

Tom Tillotson, the town moderator in Dixville Notch, said last week that there would normally be a big food spread and a lot of media crammed into a small space to watch the voting. But that's no longer possible because of the coronavirus pandemic.

“Sixty years — and unfortunately, we can't celebrate it," he said.

The township, however, hasn't always predicted the election's eventual winner, as Hillary Clinton won Dixville Notch in 2016, despite Trump going on to win the Electoral College.

RELATED: 2020 presidential election: Where Trump and Biden stand on key issues, according to their campaigns

For years, voting was held in the wood-paneled room filled with political memorabilia at the Balsams, which closed in 2011. Some of those items were brought over to a former culinary school on the property, the setting for Tuesday's vote.