President Joe Biden spoke on the final day of the White House's Summit for Democracy, which focused on the importance of election integrity and other items, on Dec. 10, 2021.

President Joe Biden signed a bill into law Thursday to block imports from China's Xinjiang region unless businesses can prove the items were made without forced labor, the latest in a series of intensifying U.S. penalties against the Asian power for alleged abuses.

The measure had to overcome some initial hesitation from the White House, as well as corporate opposition, to win final passage last week in the Senate, following earlier House passage. Biden also signed a separate bill Thursday funding research into a cure for Lou Gehrig's disease.

"Today, I signed the bipartisan Uyghur Forced Labor Prevention Act," Biden said on Twitter, along with a photo of him as he signed the legislative text at his desk in the Oval Office. "The United States will continue to use every tool at our disposal to ensure supply chains are free from the use of forced labor — including from Xinjiang and other parts of China."

The new law is the latest in a series of attempts by the U.S to get tough with China over its alleged systemic and widespread abuse of ethnic and religious minorities in its western region, especially Xinjiang’s predominantly Muslim Uyghurs.

It requires U.S. government agencies to expand their monitoring of the use of forced labor by China’s ethnic minorities. Crucially, it creates a presumption that goods coming from Xinjiang are made with forced labor. Businesses will have to prove that forced labor, including by workers transferred from Xinjiang, was not used in manufacturing the product before it will be allowed into the U.S.

The House and Senate each passed the measure with overwhelming support from Democrats and Republicans.

It wasn't until shortly before the Senate voted last week that the White House said Biden supported the measure. The announcement followed months in which the White House declined, despite repeated questioning, to take a public stand on an earlier version of the measure. 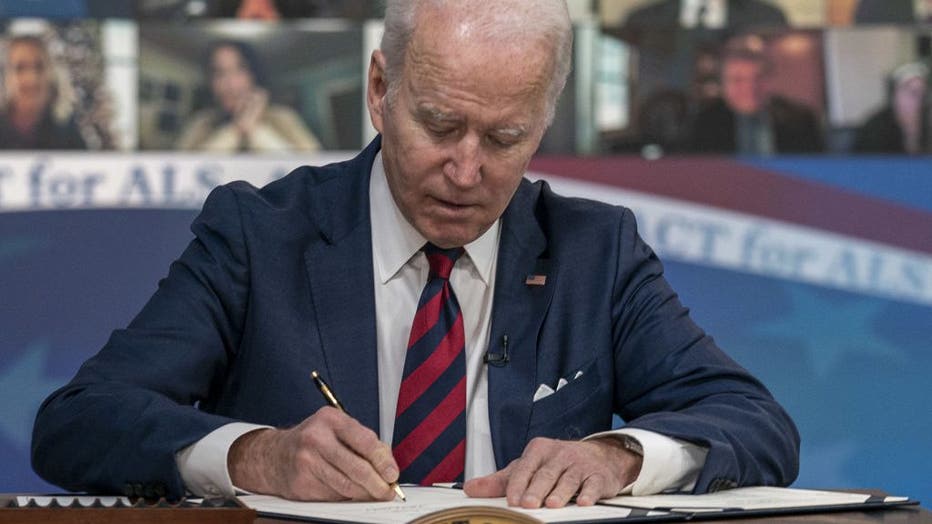 The United States says China is committing genocide in its treatment of the Uyghurs. That includes widespread reports by rights groups and journalists of forced sterilization and large detention camps where many Uyghurs allegedly are forced to work in factories.

China denies any abuses and says the steps it has taken are necessary to combat terrorism and a separatist movement.

The U.S. cites raw cotton, gloves, tomato products, silicon and viscose, fishing gear and components in solar energy as among goods alleged to have been produced using forced labor in Xinjiang, a resource-rich mining region that is important for agricultural production. The region also is home a booming industrial sector.

Detainees also are moved outside Xinjiang and put to work in factories, including in the apparel and textiles, electronics, solar energy and automotive sectors, the U.S. says.

Some big corporations lobbied against the measure. Apple, like Nike and other companies with production done in China, said it had found no sign of forced labor from Xinjiang in its manufacturing or supply chain.

Uyghur rights advocates and others had also feared private opposition from within the Biden administration as the U.S. sought cooperation from the Chinese on climate change and other issues.

The White House also recently announced that it would stage a diplomatic boycott of the coming Winter Olympics in Beijing, citing China’s "egregious human rights abuses and atrocities in Xinjiang." U.S. athletes will be allowed to compete under a diplomatic boycott, but the president and other U.S. dignitaries will not travel to the games, which open in February.

While Biden signed the Uyhgur bill in private, the White House arranged a public signing ceremony — with guests participating remotely — for the Accelerating Access to Critical Therapies for ALS Act.

The law will funnel $100 million annually between 2022 and 2026 into research into Lou Gehrig's disease, an incurable neurodegenerative disorder also known as amyotrophic lateral sclerosis, and similar diseases. It will also create grant programs and provide early access to promising treatments for patients who aren't accepted into clinical trials.

"For too long there have been no survivors of ALS, but this bill can get us closer to changing that," Biden said.

ALS is named for the New York Yankees baseball player who retired 1939 because of the disease. Gehrig died in 1941.