President Donald Trump's doctors held a press conference Oct. 5 to discuss his condition ahead of his release from the hospital following treatment for COVID-19.

WASHINGTON (AP) - Democratic presidential candidate Joe Biden said he and President Donald Trump “shouldn’t have a debate” as long as the president remains positive for the coronavirus.

Biden said Tuesday that he’s “looking forward to being able to debate him,” but said “we’re going to have to follow very strict guidelines.” He said he doesn’t know Trump’s status since the president returned to the White House after being hospitalized at Walter Reed National Military Medical Center for three days after a COVID-19 diagnosis.

Biden told reporters while boarding his plane back to Delaware in Hagerstown, Maryland: “I think if he still has COVID, then we shouldn’t have a debate.”

RELATED: Trump to debate Biden next week as doctor says president 'reports no symptoms' of COVID-19

The next debate is scheduled for Oct. 15, with a third debate slated for Oct. 22.

Biden’s campaign said he tested negative for COVID-19 earlier Tuesday. Meanwhile, the president is still recovering from the illness at the White House after a days-long stay at Walter Reed Military Medical Center for treatment.

While it remains unclear how Trump will proceed with his campaign while sick with the virus, the president seems to have no intention of pulling out of the upcoming debate.

“I am looking forward to the debate on the evening of Thursday, October 15th in Miami. It will be great!” Trump tweeted Tuesday. 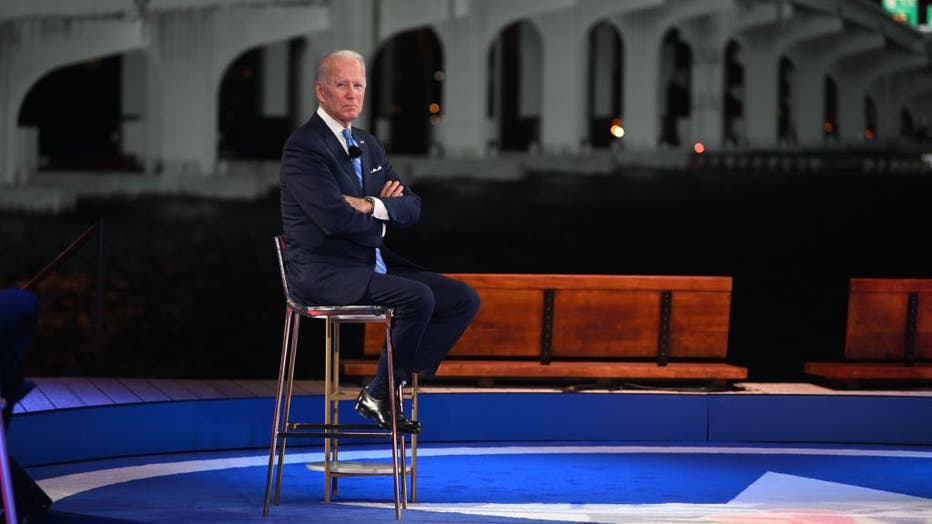 FILE - Democratic presidential nominee and former Vice President Joe Biden participates in an NBC Town Hall event at the Perez Art Museum, with the MacArthur Causeway in the background, in Miami, Florida on October 5, 2020. (Photo by ROBERTO SCHMIDT/AFP via Getty Images)

“Will be back on the Campaign Trail soon!!!” Trump tweeted.

Despite a recent outbreak among Trump’s cabinet and individuals who work closely with Trump, Kamala Harris' chief of staff said the Democratic campaign is confident in the safety measures for Wednesday’s vice presidential debate.

But Biden campaign adviser Karine Jean-Pierre called it “shameful” that Vice President Mike Pence’s team would object to the use of a plexiglass barrier between the candidates. She noted that Pence heads the White House’s coronavirus task force and said he and his team should want more protection for him and other people involved in the debate.

Harris and Pence will meet Wednesday night at the University of Utah for the only vice presidential debate.