WASHINGTON - President-elect Joe Biden has reportedly chosen Ron Klain as White House chief of staff, multiple media outlets reported Tuesday. Both Klain and Biden confirmed his selection for the role in a tweet.

“I’ve seen so many kind wishes tonight on this website. Thank you - and I’m sorry I can’t reply to each of you,” Klain wrote on Twitter. “I’m honored by the President-elect’s confidence and will give my all to lead a talented and diverse team in a Biden-Harris WH.”

Klain was an early favorite to become Biden’s chief of staff, according to multiple people familiar with the planning who spoke to the Associated Press on the condition of anonymity.

Biden congratulated Klain on Twitter, writing, “Ron Klain’s deep, varied experience and capacity to work with people all across the political spectrum is precisely what I need in a White House chief of staff as we confront this moment of crisis and bring our country together again.”

Biden had earlier confirmed the pick in a statement to The Washington Post and FOX News Wednesday.

“Ron has been invaluable to me over the many years that we have worked together, including as we rescued the American economy from one of the worst downturns in our history in 2009 and later overcame a daunting public health emergency in 2014,” Biden said in the statement obtained by the FOX News. “His deep, varied experience and capacity to work with people all across the political spectrum is precisely what I need in a White House chief of staff as we confront this moment of crisis and bring our country together again.”

The Biden-Harris transition team is expected to announce more Cabinet picks over the next several days, according to FOX News. Trump has yet to concede defeat in the 2020 election and launched legal challenges over voting results in several states, several of which were quickly dismissed.

The journey to president-elect was a long and winding road for the former vice president.

The chief of staff is typically a gatekeeper for the president, crafting political and legislative strategy and often serving as a liaison to Capitol Hill in legislative negotiations.

Klain will enter the new administration with decades of Washington experience, including as Biden’s chief of staff when he was vice president, in addition to serving as the Ebola response coordinator in 2014. Klain also had a key role in the Obama administration's financial crisis response.

He was also chief of staff to Vice President Al Gore in the mid-1990s and was a key adviser on the Biden campaign, guiding Biden’s debate preparations and coronavirus response. He’s known and worked with Biden since the Democrat’s 1987 presidential campaign. 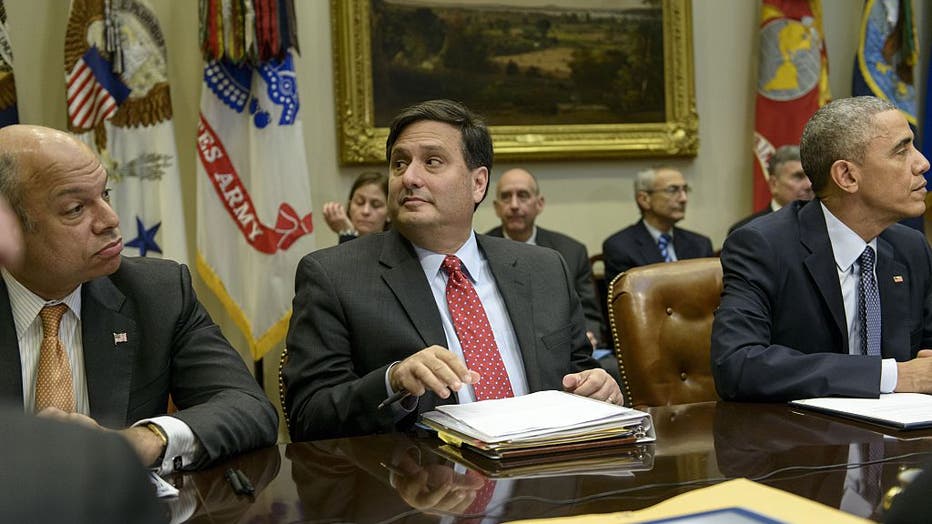 FILE - US Secretary of Homeland Security Jeh Johnson (L), Ebola Czar Ron Klain (C) and US President Barack Obama (R) wait with others, before a meeting at the White House November 18, 2014 in Washington, DC. (BRENDAN SMIALOWSKI/AFP via Getty Images)

The task is taking on even greater urgency than in past transitions because Biden will take office in January amid a raging pandemic that will likely consume the early days of his presidency and require a full government response.

It's a striking shift from President Donald Trump, who built out his Cabinet with a raft of unorthodox picks, many of whom were openly skeptical of the federal government's role in the jobs they were tasked with.

And Republican Rep. Mick Mulvaney of South Carolina, who initially served as White House budget director, supported shutting down the government to rein in federal spending and was critical of some of the proposals Trump aimed to invest in, like a massive infrastructure policy.

Biden made clear on Monday that he would focus on the pandemic by forming a coronavirus advisory board.

Former Surgeon General Vivek Murthy, who was named a co-chair of that panel, is seen as a contender for the top job at the Department of Health and Human Services. New Mexico Gov. Michelle Lujan Grisham, who ran her state's health department, is also being eyed for the position.