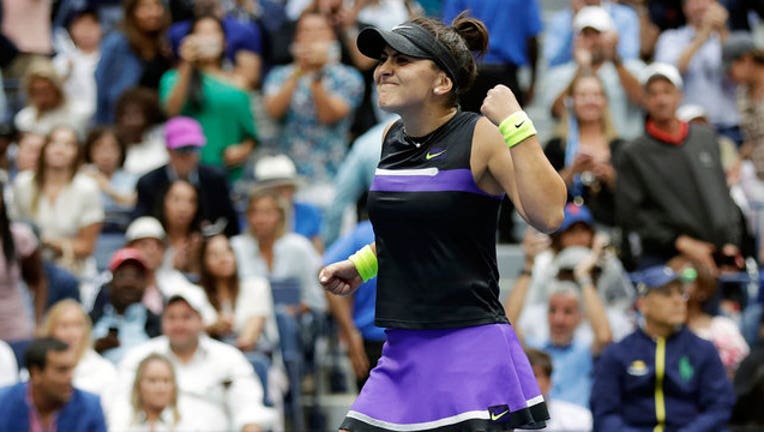 And now the 19-year-old from Canada is a Grand Slam champion, earning her first such title while preventing Williams from collecting a record-tying 24th.

Andreescu took charge early in the U.S. Open final, going up by a set and two breaks, then held off a late charge by Williams to win 6-3, 7-5 for the championship Saturday night.

"Being able to play on this stage against Serena, a true legend in this sport, is amazing," said Andreescu, who was appearing in her first major final, while Williams was in her 33rd. "Oh, man, it wasn't easy at all."

This is the second year in a row that Williams has lost in the final at Flushing Meadows. This one had none of the controversy of 2018, when she got into an extended argument with the chair umpire while being beaten by Naomi Osaka.

Williams has now been the runner-up at four of the seven majors she has entered since returning to the tour after having a baby two years ago. The 37-year-old American remains stuck on 23 Grand Slam singles titles, one shy of Margaret Court's mark for the most in history.

Andreescu, the first player from Canada to win a major singles title, went up 5-1 in the second set and served for the victory there, even holding a match point at 40-30. But Williams erased that with a forehand return winner off a 105 mph serve.

That launched a four-game run for Williams, who broke Andreescu again to make it 5-all.

"I was just fighting at that point," said Williams, a six-time U.S. Open champion. "Just trying to stay out there a little bit longer."

The Arthur Ashe Stadium crowd was overwhelmingly supporting Williams, not surprisingly, and spectators got so loud as she tried to put together a successful comeback that Andreescu covered her ears with her hands after one point.

"I just tried to block everything out," Andreescu said afterward. "I'm just glad with how I managed, really."

Suddenly, this was a contest.

Or so it seemed.

But as well as Andreescu handled everything — herself, her far-more-experienced and successful opponent, and even the moment — Williams was far from her best, especially while serving. She got broken for the sixth time in the final game.

This was the largest age gap in a Grand Slam final, and it came almost exactly 20 years to the day since Williams won the U.S. Open for her first major title in 1999, a year before Andreescu was born.

Andreescu is the first woman to win the trophy at Flushing Meadows in her main-draw tournament debut in the Open era, which started in 1968 when professionals were allowed into Grand Slam tournaments. She only has participated in four majors in her brief career.

Just think: A year ago, Andreescu was losing in the opening round of qualifying.

On Saturday, there she was, putting her hands on her head, dropping her racket and then pumping her fists when it ended. After a hug from a smiling Williams at the net, Andreescu kissed the blue court and rolled onto her back, soaking in the applause.

About two hours earlier, the 15th-seeded Andreescu was standing in the hallway leading from the locker room to the court, doing a prematch interview in which she sounded like someone whose mind was as confident as her play would soon be, saying, "I'm just going to take it like it's any other match."

She began the day with a 33-4 record in 2019, including 7-0 against top-10 opponents, and without a loss in a completed match since March 1. Andreescu missed a chunk of time in that span with a shoulder injury, which clearly is no longer hindering her.

Andreescu took it to Williams, figuratively and literally. Andreescu produced the kind of power Williams is more accustomed to dishing out than dealing with from the other side of the net. One shot went right at Williams, who leaped to avoid the ball at the baseline.

And Andreescu was fearless, always pushing, always aggressive, punctuating plenty of winners with cries of "Come on!" — the way Williams does — or "Let's go!"

Even her coin-toss choice showed just how bold she is: Andreescu opted to receive, a decision that at first glance might have seemed unusual, given that she was facing the woman generally regarded as the possessor of the greatest serve in the game, now or ever.

On this day, though, it worked out. Williams double-faulted eight times in all, including three times on break point, part of her 33 unforced errors, nearly twice as many as Andreescu's 17.

There were other ways in which Williams was not at her best, seemingly unsure of herself, including one odd-looking check-swing on a backhand in the second set that then let Andreescu put a shot away to go up 4-1.

When she was 16, Andreescu wrote herself a fake U.S. Open winner's check, part of her efforts to visualize success. Kept updating the amount of prize money as it rose in real life.

On Saturday night, she really did get that champion's check, to the tune of $3.85 million.