Pope Emeritus Benedict XVI, the shy German theologian who tried to reawaken Christianity in a secularized Europe but will forever be remembered as the first pontiff in 600 years to resign from the job, died Saturday. He was 95.

VATICAN CITY - Within minutes of the announcement of the death of Emeritus Pope Benedict XVI Saturday morning, a wealth of tributes poured in from around the world, while the Vatican revealed that the late pontiff would be given a "simple" funeral, celebrated by Pope Francis, in keeping with his wishes.

Words of praise and fond remembrance poured in from world leaders and religious figures, including the archbishop of Canterbury and Jewish advocates.

Vatican spokesman Matteo Bruni said that Francis will celebrate a solemn but sober funeral in St. Peter’s Square on Thursday with rites that, "following the desire of the pope emeritus, will be carried out in the sign of simplicity."

Starting on Monday, the faithful will be able to file by his body in St. Peter's Basilica.

The square was festive with a towering Christmas tree and life-sized creche scene. Hundreds of tourists were strolling through the square, many unaware that Benedict had died in his secluded residence in the Vatican Gardens.

Benedict "prayed in silence, as one should do," said Fabrizio Giambrone, a tourist from Sicily who recalled the late pontiff as a "very good person" who lacked the "charisma" of his predecessor, St. John Paul II, and of his successor, Pope Francis. 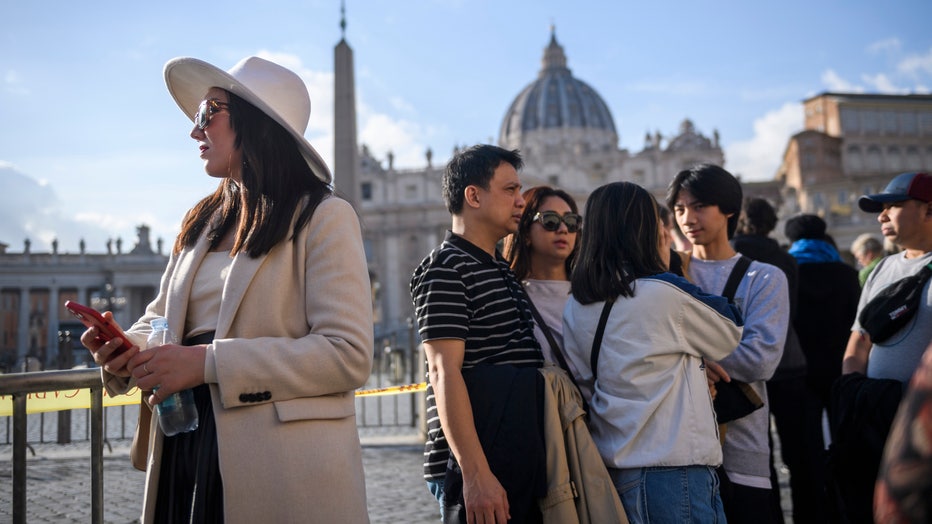 People gather at St. Peter's Square after the announcement of the death of former Pope Benedict XVI on December 31, 2022 in Vatican City, Vatican. (Photo by Antonio Masiello/Getty Images)

Laura Camila Rodriguez, 16, visiting from Bogota, Colombia, with her parents, said she was traveling on a train bound for Rome earlier on Saturday when she learned of Benedict's death.

"It was a shock, but it’s probably good for him that he can now rest in peace, at his age," she said. "I think Francis is a good pope, he was a good successor, able to head the Catholic Church."

World leaders, Jewish advocates and the archbishop of Canterbury were among those mourning the death.

The American Jewish Committee in a statement from New York praised Benedict for having "continued the path of reconciliation and friendship with world Jewry blazed by his predecessor, John Paul II." The organization noted that the German-born Catholic church leader had "paid homage in Auschwitz" to the victims of the Holocaust and had made an official visit to Israel.

"He condemned antisemitism as a sin against God and man, and he emphasized the unique relationship between Christianity and Judaism," the statement said.

Praise for Benedict's religious devotion came from the archbishop of Canterbury, Justin Welby. "In his life and ministry, Pope Benedict XVI directed people to Christ," the Anglican leader tweeted.

"I join with Pope Francis and all the Catholic Church in mourning his death. May he rest in Christ’s peace and rise in glory with all the Saints."

Dubbed "God's Rottweiller" for his fierce defense of Catholic teaching in the decades that he led the Vatican doctrinal orthodoxy office, Benedict was viewed less enthusiastically by some for his stance on homosexuality and against women's desire to break with the church's ban on female priests.

For all his accomplishments and accolades, Benedict will forever be known as the first pope in 600 years to resign.

The former German Cardinal Joseph Ratzinger was the Vatican’s doctrinal watchdog before becoming pope. Then, after being elected pontiff in 2005, he continued the conservative course charted by St. John Paul II, using intellectually rigorous sermons that decried how the world seemed to think it could do without God.

Here are some highlights of his life before, during and after his eight-year papacy.

During nearly a quarter-century as prefect of the Congregation for the Doctrine of the Faith, Ratzinger became known for disciplining errant theologians, particularly those who espoused the Liberation Theology popular in Latin America in the 1970s and ’80s.

As John Paul’s right-hand man on doctrinal matters, Ratzinger wrote documents reinforcing church teaching opposing homosexuality, abortion and euthanasia, and asserting that salvation can only be found in the Catholic Church. 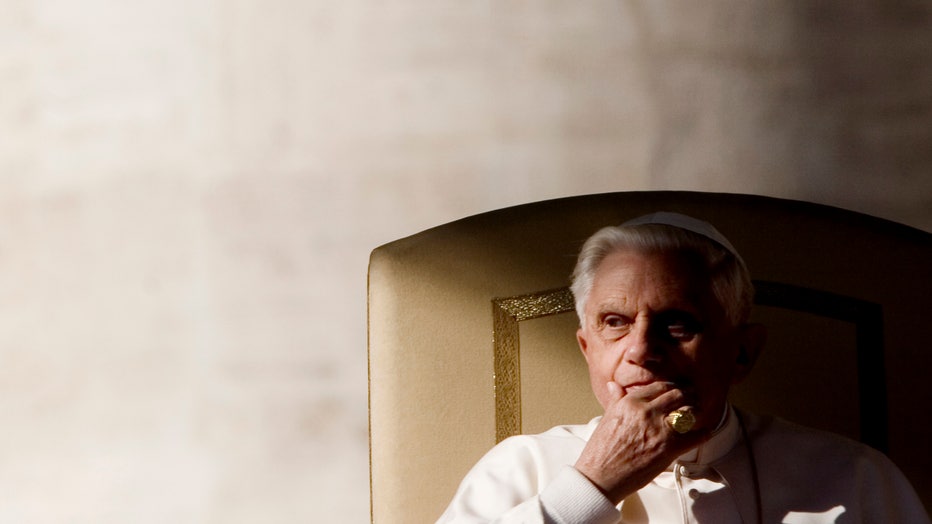 Pope Benedict XVI at the end of his general weekly audience in St. Peter's Square at the Vatican. (Photo by Alessandra Benedetti/Corbis via Getty Images)

But Ratzinger was also responsible for one of the most important in-house reforms at the Vatican: requiring all cases of clergy sex abuse be sent to his office for processing. The 2001 change was a response to mounting evidence that bishops were moving priestly abusers around rather than sanctioning them.

Ratzinger was the favorite going into the 2005 conclave after John Paul’s death, and he was elected on the fourth round of voting after the runner-up, Argentine Cardinal Jorge Mario Bergoglio — the future Pope Francis — took himself out of the running.

Benedict had big shoes to fill, and he set about trying to remind Europe of its Christian roots while also seeking improved ties with China and the Orthodox Church. 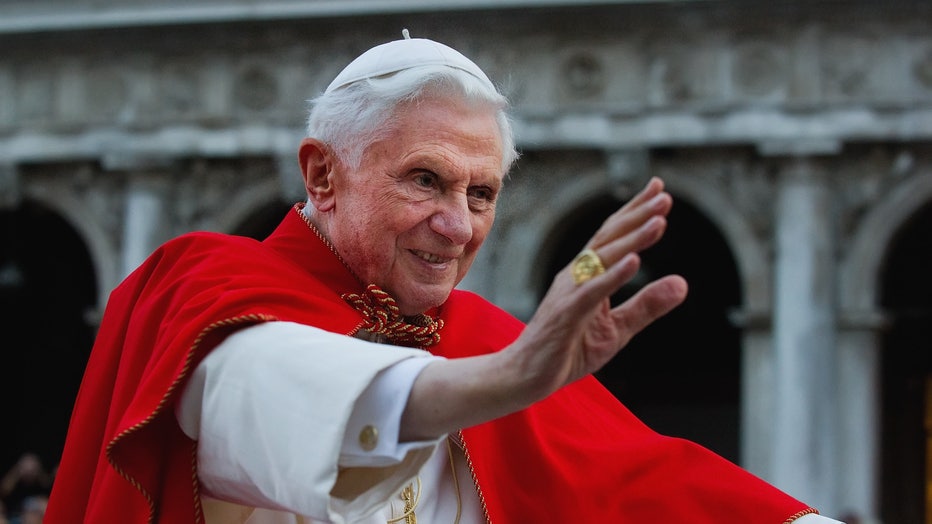 Pope Benedict XVI greets the crowd gathered in St Mark's Square while crossing the square on an electric car on May 7, 2011 in Venice, Italy. (Photo by Marco Secchi/Getty Images)

But his eight-year papacy was marred by a series of communications blunders, missteps and scandals that culminated with a Vatican criminal trial of his former butler who was accused of leaking his personal correspondence to a journalist.

Relations with Jews and Muslims

Benedict made an outreach to Jews a hallmark of his papacy, and in one of his most significant acts, he made a sweeping exoneration of the Jewish people for the death of Christ.

But he also enraged Jewish groups when he rehabilitated a Holocaust-denying bishop — a scandal that he admitted could have been avoided if someone at the Vatican had done a simple internet search of the bishop’s name. 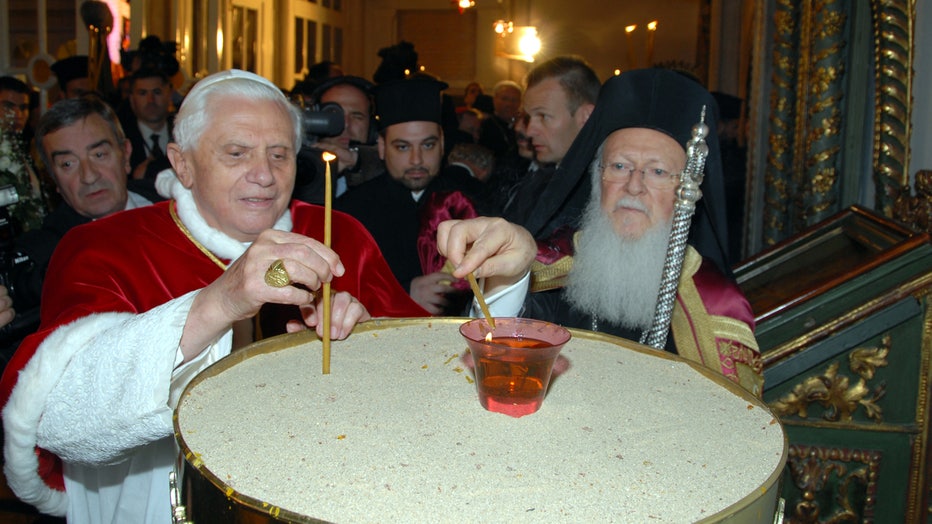 Benedict’s relations with Muslims were more fraught. He roiled the Islamic world with a 2006 speech in Regensburg, Germany, in which he quoted a Byzantine emperor who characterized some of the teachings of the Prophet Muhammad as "evil and inhuman," particularly his command to spread the faith "by the sword."

A subsequent comment after the massacre of Christians in Egypt led the Al Azhar center in Cairo, the seat of Sunni Muslim learning, to suspend ties with the Vatican, which were only restored under Francis.

Benedict chose Feb. 11, 2013 — a Vatican holiday, with a routine audience with his cardinals — to make the historic announcement in Latin that he would become the first pope since Gregory XII in 1415 to resign. 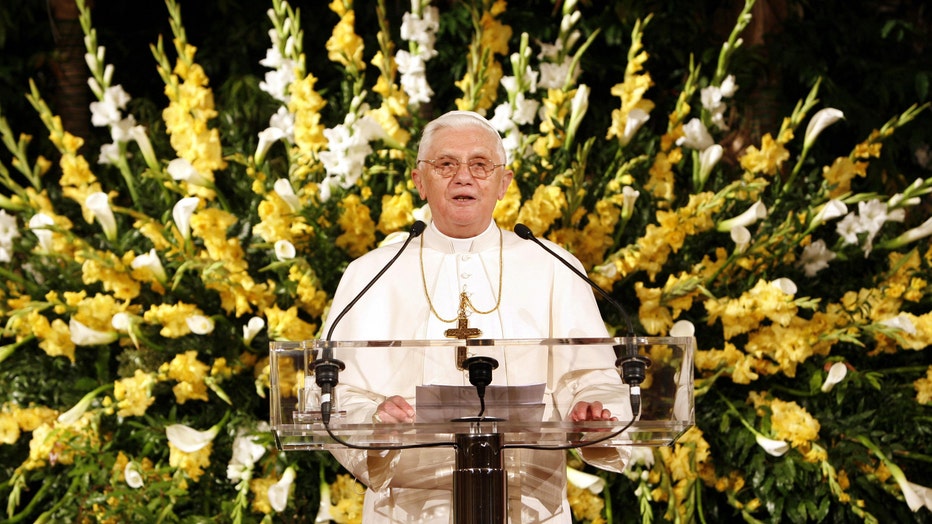 While the decision took the world by surprise, Benedict had been nursing it for months. He had taken a nighttime fall during a 2012 trip to Mexico that confirmed to him that he could no longer keep up with the grueling, globe-trotting demands of the 21st century papacy.

Benedict told the cardinals that because of his age, he no longer had the required "strength of mind and body" to do the job and was freely deciding to renounce his papal ministry.

He left the Vatican on Feb. 28, 2013, flying by helicopter to the papal summer retreat in Castel Gandolfo, south of Rome, where he spent the first months of his retirement.

Benedict largely kept to his word that he would live a lifetime of prayer and meditation "hidden to the world" in the converted monastery in the Vatican gardens.

But he remained a point of reference for traditionalists nostalgic for his orthodox papacy. And his few public pronouncements as "pope emeritus" made headlines and fueled calls for guidelines for future retired popes to prevent confusion about who was really in charge. 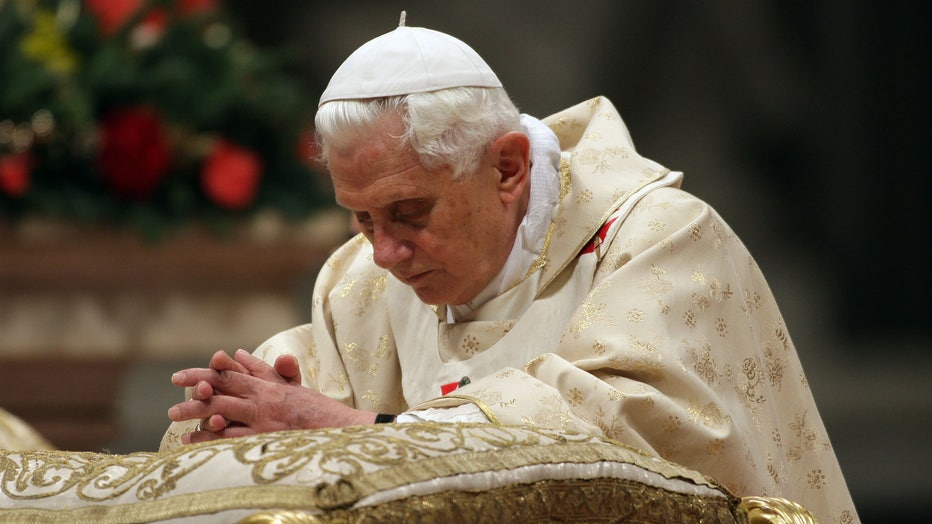 Pope Benedict XVI gives Christmas Night Mass at St. Peter's Basilica on December 24, 2009 in Vatican City, Vatican. The mass on Christmas Eve and Christmas Day are scheduled to be televised in an estimated 73 countries. (Photo by Franco Origlia/Getty

The most damaging incident was his participation in a 2020 book about preserving celibacy for Catholic priests. It was published at the precise moment that Francis was weighing whether to relax celibacy in the Amazon to address a priest shortage.