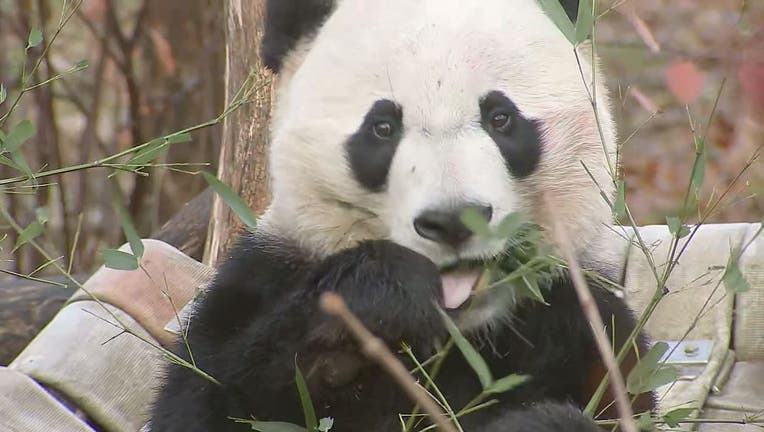 WASHINGTON - A bittersweet day in the nation's capital as the country said goodbye to the beloved giant panda, Bei Bei.

The 4-year-old panda departed the Smithsonian's National Zoo around noon Tuesday inside his custom-built steel and plexiglass transport container. He and Zoo staff headed to Dulles International Airport and boarded a FedEx plane – named the Panda Express. Bei Bei, a keeper and a veterinarian from the Zoo will now travel to Chengdu, China where the panda will live at the Bifengxia Panda Base.

REALTED: Ever wonder what goes into transporting a panda from DC to China?

A bittersweet day in the nation's capital as the country says goodbye to our beloved giant panda, Bei Bei.

The 8,500 mile nonstop flight will take about 16-hours. Bei Bei will have plenty of snacks for the trip -- including 66 pounds of bamboo, two pounds of apples, two bags of leafeater biscuits, two pounds of cooked sweet potatoes, and plenty of water!

A bittersweet day in D.C. as we say goodbye to our beloved giant panda, Bei Bei.

Once in Chengdu, Bei Bei’s new keepers from the China Conservation and Research Center for the Giant Panda will meet him on the tarmac and drive him to Bifenxia Panda Base.

There, Bei Bei will remain in quarantine for 30 days before ultimately ending up in the giant panda breeding program when he reaches between six and seven years old.