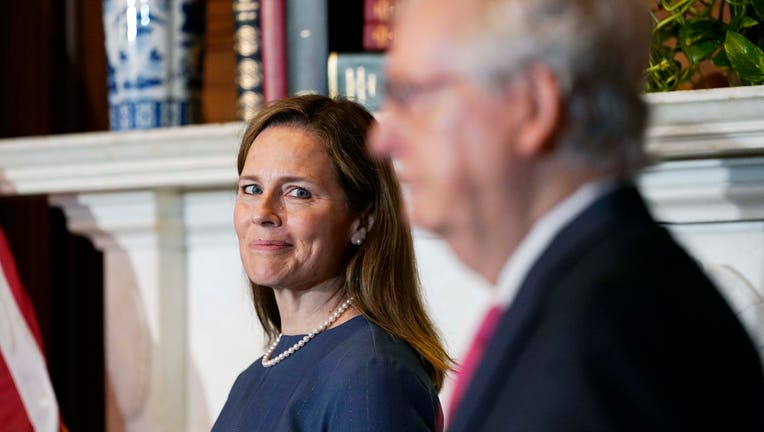 WASHINGTON (AP) - Supreme Court nominee Amy Coney Barret t will tell senators that courts “should not try” to make policy, leaving those decisions to the political branches of government, according to opening remarks for her confirmation hearing obtained Sunday by The Associated Press.

“I have been nominated to fill Justice Ginsburg’s seat, but no one will ever take her place,” Barrett will tell the committee, according to her opening remarks.

Barrett says she has resolved to maintain the same perspective as her mentor, the late Justice Antonin Scalia, who was “devoted to his family, resolute in his beliefs, and fearless of criticism.”

She speaks extensively of her family in the statement, and says she will never let the law define her identity or crowd out the rest of her life. She says a similar principle applies to the courts, which are “not designed to solve every problem or right every wrong in our public life.”

“The policy decisions and value judgments of government must be made by the political branches elected by and accountable to the People,” she says. “The public should not expect courts to do so, and courts should not try.”

Barrett will tell the senators that "courts are not designed to solve every problem or right every wrong in our public life.”

Republicans who control the Senate are moving at a breakneck pace to put the 48-year-old judge on the Supreme Court before the Nov. 3 election, in time to hear a high-profile challenge to the Affordable Care Act and any election-related challenges that may follow the voting.

Another reason for moving quickly: It’s unclear whether the election results would make it harder to confirm Barrett before the end of the year if Democrat Joe Biden were to win the White House and Democrats were to gain seats in the Senate.

The hearing is taking place less than a month after the death of Ginsburg gave Trump the chance to replace the liberal justice and entrench a conservative majority on the nine-member court. Barrett would be Trump's third Supreme Court justice.

The country will get an extended look at Barrett over three days, beginning with her opening statement late Monday and hours of questioning Tuesday and Wednesday.

Democrats have pressed in vain so far to delay the hearings, first because of the proximity to the election and now the virus threat. No Supreme Court justice has ever been confirmed so close to a presidential election.