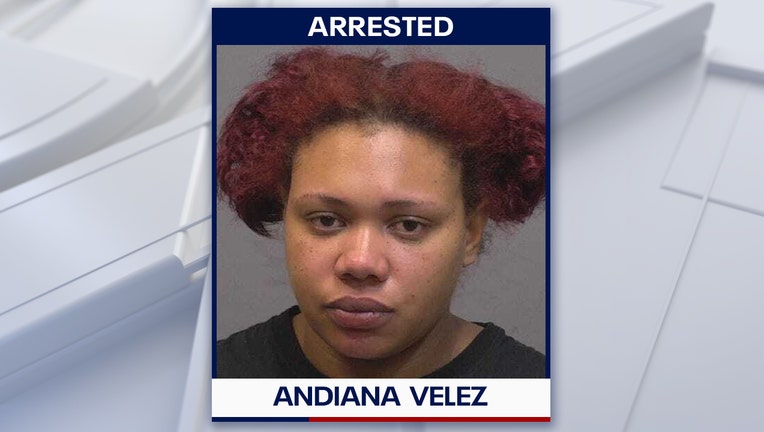 NEW YORK - A Connecticut woman is charged with abandoning an injured 8-month-old girl in a trash bin.  The woman cried during a court hearing Tuesday, as authorities continued to investigate who was responsible for burns to the baby's hands.

The girl was found alive in a dumpster outside a New Haven apartment complex on Monday and taken to Yale New Haven Children's Hospital, where she was reported in stable condition.

Police arrested 24-year-old Andiana Velez, of Hamden, and said they believed she was the girl's babysitter. Velez was charged with risk of injury to a child, second-degree assault and reckless endangerment. The assault charge, authorities said, was filed because Velez stabbed the baby's 21-year-old mother, whose condition was not disclosed.

Velez was detained on $250,000 bail, which was increased to $500,000 by a state judge during Tuesday's arraignment. Velez was in a courthouse lockup and appeared at the hearing via video. Her public defender, Trey Bruce, urged the judge to decrease bail to $50,000, saying Velez was a lifelong resident of the New Haven area and she was seeking therapy.

Court records show Velez has convictions for assault and threatening as well as several other pending cases on similar charges.

A tenant of the Presidential Gardens apartments found the baby while taking out his trash and called on maintenance workers at the complex to help get her out, one of the workers said.

Rick Chardon, a maintenance worker, recalled that the resident who found the girl was throwing out his trash and started to walk away when he heard “something crying.”

“He turned around and looked in," Chardon said. "There was a little baby that had trash on top of it. ... She was shivering like crazy when I got her in my arms.”

The baby's injuries and abandonment stunned and dismayed residents including Ruth Harris.

“That’s got to be the saddest thing ever,” Harris told Hearst Connecticut Media. "How can ... any person be that cruel? It just tears your heart up inside. ... It hurts me and it’s not even my child.”