U.S. House lawmakers grilled the head of the Food and Drug Administration -- Commissioner Robert Califf -- over the agency's response to the troubling shortage of baby formula.

CHANTILLY, Va. (AP) - Jill Biden and Surgeon General Vivek Murthy welcomed the delivery Wednesday of a second shipment of tens of thousands of pounds of baby formula that the Biden administration is importing from Europe to ease critical supply shortages in the U.S.

The first lady and the nation's doctor each sought to empathize with anxious parents nationwide who have been scrambling to find enough formula for their children.

Both said President Joe Biden and his team understand what parents are going through and were working hard to solve the latest domestic crisis to challenge the administration. Biden has come under growing political pressure for not acting more quickly to try to head off the supply crisis.

"As a mom and a Nana, it's impossible to hear the stories of children suffering and not imagine your own children in the same position," the first lady said, using her grandchildren's nickname for her. "Food is the first and most important way we nurture our children."

Murthy, a father of two young children, said he knows "how important it is to parents that they have confidence in their ability to safely and securely feed their child. And I know how frustrating and scary it can be when that security feels out of reach."

"That is why we will not rest until every parent has the formula they need for their child," he pledged. 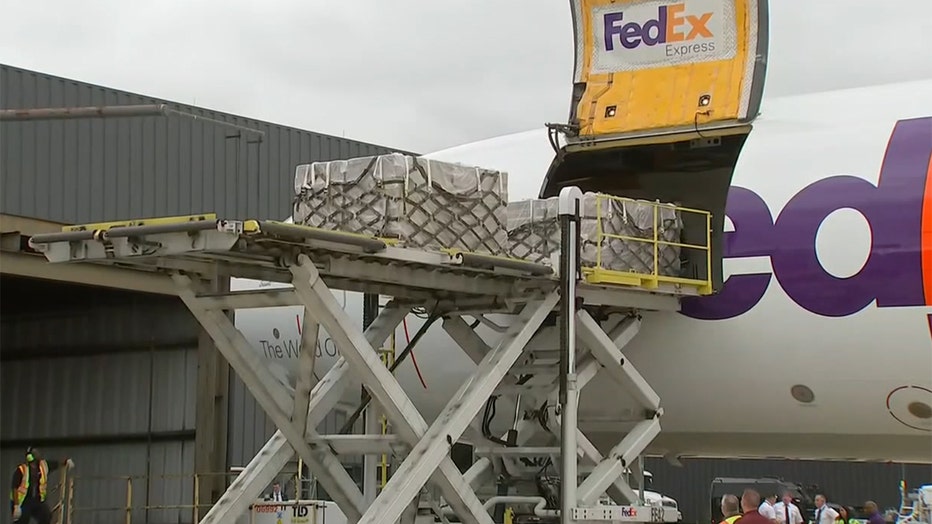 A shipment of baby formula is off-loaded from a plane at Dulles International Airport in Virginia, Wednesday, May 25, 2022. (Pool Image)

Biden and Murthy spoke on the tarmac at Dulles International Airport in Virginia in front of a FedEx Express plane that had just delivered 120,000 pounds (54,431. kilograms) , or 60 tons, of infant formula from Ramstein Air Base in Germany under the administration's Operation Fly Formula program.

With Wednesday's delivery and a shipment of 78000 pounds (35,380 kilograms) of specialty infant formula that was flown by military aircraft to Indianapolis over the weekend, "we now have brought the equivalent of 1.5 million eight-ounce bottles of infant formula to the United States," Murthy said.

More deliveries are scheduled to arrive soon. The administration has cut the timeframe for deliveries to three days, down from up to four weeks, he said.

Jill Biden said her husband knows there is "more to do" to solve the baby formula shortages.

"I'm here today to say to parents, 'you aren't alone,'" she said. "At the highest levels of Joe's administration, he and his team understand what you're going through and they are finding solutions. And they won't stop until all parents can get the formula all their children need."

Under Operation Fly Formula, infant formula that meets U.S. health and safety standards is imported from overseas manufacturers and delivered to hospitals and retailers in the United States.

The 114 pallets of Nestle's Gerber Good Start Extensive HA formula delivered Wednesday will be transported by FedEx to a Nestle distribution facility near Allentown, Pennsylvania, the White House said.

The three formulas are for children who are allergic to cow's milk protein.

The baby formula shortage stems mostly from Abbott Nutrition's plant in Sturgis, Michigan, which the Food and Drug Administration closed in February due to contamination issues. Abbott, one of a handful of companies that control the vast majority of the market for infant formula, then announced a massive recall of its product on Feb. 17, which led to the nationwide supply shortage.

Abbott and the FDA recently reached an agreement to reopen the plant next week. But it will take about two months before product is ready for delivery.