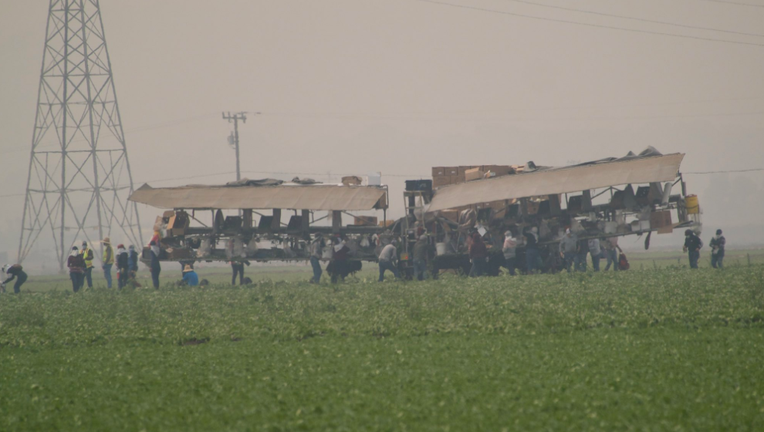 Farmworkers work in the smoky skies in Salinas as the River Fire rages. (@pocketnihilist via Storyful)

SALINAS, Calif. - As firefighters beat back smoke and flames from the wildfires burning up California, farmworkers in nearby Salinas worked fields amid smoke-filled skies as the River Fire raged nearby.

The River Fire in Monterey County south of Salinas grew to more than 33,000 acres on Thursday, Cal Fire said.

Footage taken by a Twitter user named @PocketNihilist  showed the hazy and smoky conditions, as farm workers were worked near a farm plow.

He noted: "As ash rains from the sky, they fill your plates without hazard pay."

Many also noted that the majority of farmworkers toil all day outdoors without proper breathing equipment to protect them from the unhealthy air.

A Bay Area Spare the Air alert continues through Sunday as dozens of wildfires scorch the land and produce plenty of unhealthy smoke. KTVU's Jana Katsuyama reports on the potential lasting effects of the smoke and how it factors in with the heat and COVID-19.

This year, though, the health risks are doubled or tripled according to Dr. Ronn Berrol, medical director for the Emergency Department at Alta Bates Summit Medical Center in Oakland.

"The air quality is really bad, COVID is among us and we're in a heatwave right now, so I think people really be aware of the environment and redouble their efforts for safety," Berrol said.

"The particulate matter causes inflammatory changes, so people may have chest pain, shortness of breath a few weeks later just from a persistent inflammation," he said.

Also, smoke can cause coughs, headaches, and other symptoms similar to COVID-19, so he says hospitals and clinics might face increased demand for COVID testing, masks and other personal protective equipment.

Berrol said cloth masks are still important but won't protect against small particles and he urges people to take precautions.

"I think as a community, most people have learned that when the smoke comes there's some things I should do," he said. "I shouldn't go outside, I should make sure I have water. I should close my windows."