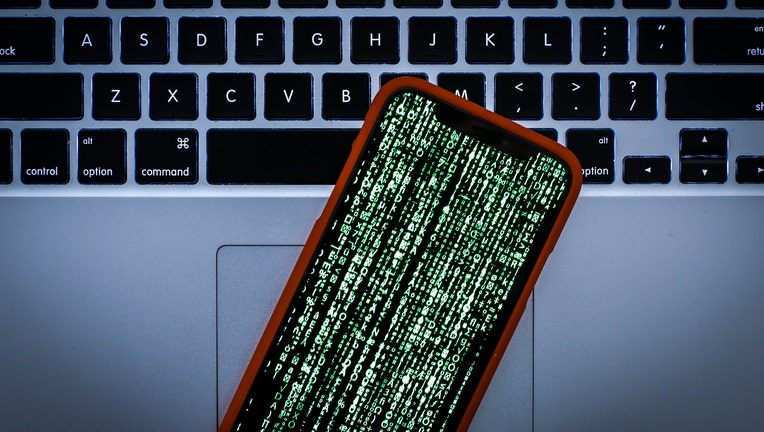 Matrix style graphics are seen on an Apple iPhone in this photo illustration on January 22, 2019. (Photo by Jaap Arriens/NurPhoto via Getty Images)

Have you ever wondered how Netflix knows the perfect show to recommend next? Or how Facebook suggests just the person you were looking to follow?

Researchers have found the power of those predicting algorithms can also "predict" the biological language of cancer and neurodegenerative diseases like Alzheimer’s - which could help change completely what researchers know about treating and preventing such diseases.

The study, done at St. John’s College, University of Cambridge, found the artificial intelligence technology could "crack the language" of such diseases. The study was published in the scientific journal PNAS.

The findings could be used in the future to "correct the grammatical mistakes inside cells that cause disease," a news release from the college stated.

Researchers say this breakthrough in technology could lead to learning how to help alleviate symptoms - and maybe even prevent the disease from happening at all.

"Bringing machine-learning technology into research into neurodegenerative diseases and cancer is an absolute game-changer," said Professor Tuomas Knowles, lead author of the paper and a Fellow at St John’s College. "Ultimately, the aim will be to use artificial intelligence to develop targeted drugs to dramatically ease symptoms or to prevent dementia happening at all."

A combination of physical activity, not smoking, light alcohol consumption, a good diet and cognitive activities may help lower the risk of the disease by as much as 60 percent, a study found.

Technology users encounter a variety of algorithms daily. The algorithms use "powerful machine-learning" data to "make highly educated guesses about what people will do next," as St. John’s College explained it. That’s how Netflix and other streaming services can offer you the best recommendations.

Dr. Kadi Liis Saar, first author of the paper and a research fellow at St John’s College, used similar machine-learning technology to train a large-scale language model to look at what happens when something goes wrong with proteins inside the body to cause disease, the college wrote.

Further use of machine-learning could transform future cancer and neurodegenerative disease research. Discoveries could be made with machine-learning beyond what scientists already know - and potentially even beyond what the human brain could ever understand, the college said.