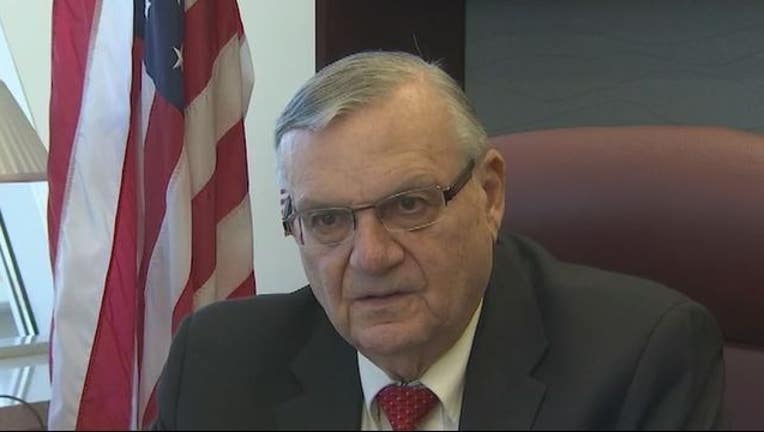 PHOENIX (AP) — Joe Arpaio, the Arizona lawman known for leading immigration crackdowns, jailing inmates in tents and receiving a pardon from President Donald Trump, is running for his former job as the sheriff of metro Phoenix after getting trounced in 2016 by a little-known challenger.

Arpaio, who also was crushed in a 2018 bid for the U.S. Senate, said his comeback bid isn't about clearing his name, avenging his last two election losses or garnering publicity for himself. He said he's seeking a seventh term as sheriff because thousands of supporters have urged him to run again.

If he wins back his old job next year, Arpaio said he would resume immigration crackdowns, focus on drug enforcement and reopen the complex of jail tents that were closed by his successor, Sheriff Paul Penzone.

During his tenure as sheriff, he conducted dozens of immigration crackdowns over a nine-year period, retaliated against political enemies and failed to investigate more than 400 sex-crimes complaints made to his office.

After he was beaten by Penzone, Arpaio was convicted of contempt of court for disobeying a judge's 2011 order in a racial profiling case to stop his traffic patrols that targeted immigrants.

He was spared a possible jail sentence when Trump pardoned his misdemeanor conviction, which wouldn't have barred Arpaio from running for office again.

Arpaio will face his former chief deputy, Jerry Sheridan, and Glendale Officer Mike Crawford in the Republican primary. Penzone is vying against William Hall in the Democratic primary.

Sheridan, who also wants to bring back the complex of jail tents, said he was disappointed that his old boss had entered the race. While Arpaio disputes it, Sheridan said Arpaio didn't deliver on his promise to endorse him.

"He was a very good sheriff in many ways, but also was not engaged in the daily operations of the sheriff's office," Sheridan said. "He left it up to me for the last six years I was his chief deputy."

Penzone didn't mention Arpaio in a statement that he issued Monday about the race. In the statement, Penzone said he has worked to bring professionalism and transparency to the office.

"The heightened level of professionalism, emphasis on accountability, fiscal responsibility, reduction of lawsuits, and focus on public safety cannot be denied," Penzone said.

Before Arpaio was voted out of office, the agency was put under the supervision of a federal judge who in 2013 concluded Latinos were racially profiled during Arpaio's immigration patrols.

The taxpayer bill from the profiling verdict is expected to reach $150 million by the summer of 2020. No one involved in the case or in county government can say exactly when the financial hemorrhaging will slow down or end.

About $54 million of the spending in the profiling case came during Arpaio's tenure. Additionally, Maricopa County paid for $90 million for judgments, settlements and legal fees in defending the sheriff's office in other lawsuits when Arpaio led the agency.

Even though Arpaio insists he can resume immigration crackdowns, the sheriff's office is barred from detaining Latino drivers or passengers based on only the belief they are in country illegally.

Arpaio also touted his volunteer posse investigation into the authenticity of then-President Barack Obama's birth certificate. He wasn't promising action on the debunked controversy, but promoted it as an accomplishment.

He lost to Penzone by nearly 13 percentage points. And he placed third in the GOP primary in the 2018 Senate race, losing both Maricopa County and his adopted hometown of Fountain Hills.