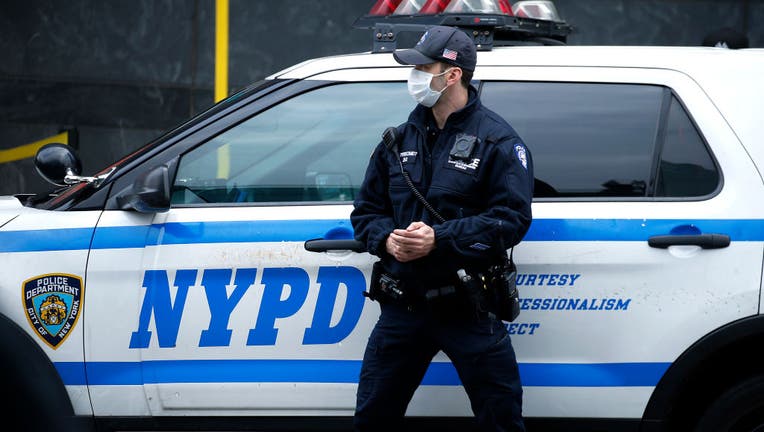 An NYPD officer stands near his patrol car amid the coronavirus pandemic on April 5, 2020 in New York City. (Photo by John Lamparski/Getty Images)

NEW YORK (AP) - A federal appeals court on Thursday agreed to keep the release of New York City police disciplinary records paused while public safety unions fight a lower-court decision that had cleared the way for their disclosure.

Two of three judges who heard arguments on the matter Tuesday in the 2nd Circuit Court of Appeals agreed to stay District Court Judge Katherine Polk Failla’s Aug. 21 ruling as the appeals process unfolds. The unions are seeking a way around a new state transparency law.

The other judge, Gerard Edmund Lynch, disagreed and would have upheld Failla's decision to lift a temporary restraining order, according to the court's ruling. The restraining order has remained in effect because of the unions' appeal.

“The battle to defend and protect public sector workers’ rights to due process continues," a spokesperson for the unions, Hank Sheinkopf, said in a statement.

The unions' opponents, including the city's police watchdog agency and reform advocates, characterized the ruling as a “minor delay” and “very narrow, and very temporary" because it only blocks records from being made public while Failla’s ruling is under appeal.

“Today’s ruling is a minor delay in our effort to deliver on the promise of 50-a repeal," said Matthew Kadushin, general counsel for the watchdog Civilian Complaint Review Board. "We are confident the 2nd Circuit will deny the unions’ appeal on the merits, and that the city will ultimately prevail in its defense of transparency.”

In a statement, Communities United for Police Reform said: “While we are disappointed by further delay in the publication of these records, today’s ruling is no indication that the underlying order allowing publication was incorrect."

At Tuesday's hearing, Lynch questioned the merits of the union lawsuit since scores of discipline records have already been posted online, noting that he was able to look up an officer he knows in a database of 320,000 NYPD misconduct complaints that the New York chapter of the American Civil Liberties Union posted online last month.

“The cat is not only out of the bag, it’s running the streets,” Lynch said.

“There are many more cats and many more bags," union lawyer Anthony Coles replied.

The Police Benevolent Association, representing New York City police officers, and other public safety unions, sued the city on July 15 to block Mayor Bill de Blasio from making good on a promise to post a database of misconduct complaints online. They argued that posting unproven or false complaints could sully officers’ reputations and compromise their safety.

New York lawmakers, spurred to action by protests over the police killing of George Floyd in Minneapolis and other police misconduct, repealed a law in June that for decades blocked the public disclosure of disciplinary records for police officers, as well as firefighters and correctional officers.